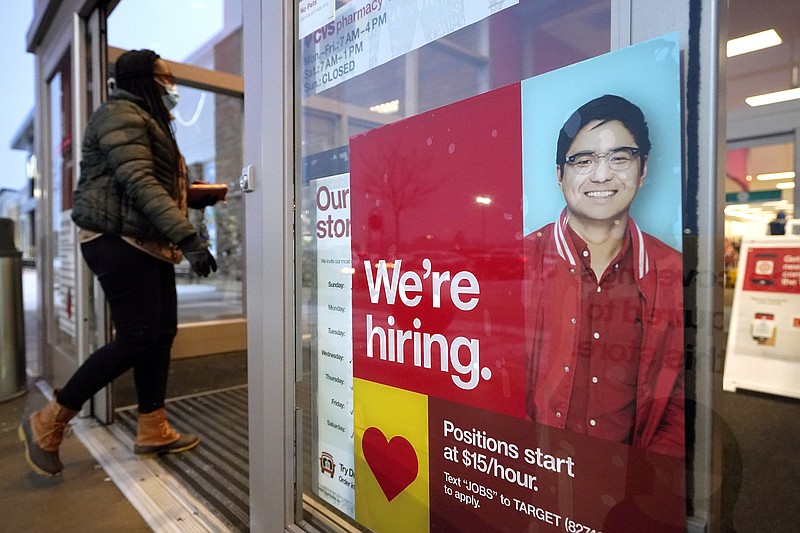 WASHINGTON -- The Federal Reserve says there's evidence that hiring has picked up in recent weeks, though the job market remains badly damaged by the pandemic.

In its semiannual monetary policy report released Friday, the Fed said it has been watching job data compiled by payroll processor ADP. The Fed has constructed its own measurement of hiring using the ADP data, and said that gauge has closely matched the government's monthly jobs reports throughout the pandemic.

"The ADP data indicate that employment improved modestly through early February," the Fed's report said. It also said that its measure shows that the battered leisure and hospitality industry -- which includes restaurants, bars, hotels and entertainment venues -- has started adding jobs again after a "temporary downturn" at the end of last year.

The Fed has in the past several years turned increasingly to nongovernmental sources of economic data to get a quicker, more timely read on the economy. In its report, the central bank said this has proved particularly useful during the pandemic given the speed of the recession, which eliminated 22 million jobs in just two months this spring. Just 55% of those jobs have been recovered.

The report will form the basis for Federal Reserve Chair Jerome Powell's testimony next week before committees in the House and Senate.

Hiring has stalled in the past three months, with job gains averaging just 90,000 a month from November through January. And the Fed's report underscored that the job market is a long way from what the central bank considers "full employment."

Roughly 4 million Americans have fallen out of the labor force since the pandemic began, meaning they are no longer working or looking for work. Powell has previously noted that if they were counted as unemployed, the jobless rate would be roughly 10%.

Still, Fed officials believe the economic outlook for later this year has brightened, according to minutes of their January meeting, released Wednesday. The distribution of vaccines and the enactment of a $900 billion economic rescue package late last year has lifted the economy's prospects, the minutes said.

In a separate section of its report, the Fed spelled out changes in its thinking that have led it to push harder for lower unemployment and place less emphasis on potential threats of inflation.

"Economic performance in recent decades, including during the previous economic expansion, has demonstrated that a strong labor market can be sustained without inducing an unwanted increase in inflation," the Fed said.

In 2019, the unemployment rate fell to a 50-year low of 3.5%, without any sign of inflation. Powell and other Fed officials have pointed to that trend as justification for keeping rates ultra-low until hiring has fully recovered. The Fed has pinned its short-term interest rate at nearly zero since last March, when the pandemic intensified.

Previously, Fed officials often felt it was necessary to raise the benchmark rate when the unemployment rate neared its estimate of maximum employment, just on the prospect that inflation would soon increase. But Fed policy now is to not raise rates until inflation has sustainably reached its target of 2%.