Government in talks with Zuckerberg by ROD MCGUIRK THE ASSOCIATED PRESS | February 20, 2021 at 1:43 a.m. 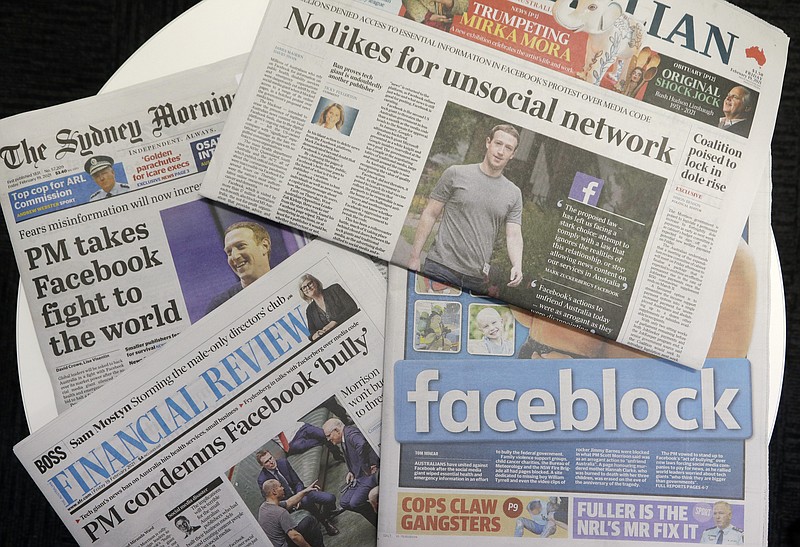 Front pages of Australian newspapers are displayed featuring stories about Facebook in Sydney, Friday, Feb. 19, 2021. In a surprise retaliatory move Thursday, Facebook blocked Australians from sharing news stories, escalating a fight with the government over whether powerful tech companies should have to pay news organizations for content. (AP Photo/Rick Rycroft)

CANBERRA, Australia -- Australia's prime minister Friday urged Facebook to lift its ban on news access for Australian users and return to the negotiating table with media organizations, warning that other countries would follow his government's example in making digital giants pay for journalism.

The blockade has escalated a fight with the government over whether powerful tech companies should have to pay news organizations for content.

"The idea of shutting down the sorts of sites they did yesterday, as some sort of threat -- well, I know how Australians react to that, and I thought that was not a good move on their part," Morrison told reporters.

"They should move quickly past that, come back to the table and we'll sort it out," he added.

Australian news organizations could not post stories and people who tried to share existing news stories got notifications saying they were blocked from doing so.

[Video not showing up above? Click here to watch » https://www.youtube.com/watch?v=AGVh5tPD1Xw]

There was public outrage at how the Facebook blockade was bungled, cutting access -- at least temporarily -- to pandemic, public health and emergency services.

Newspaper headlines included: "No likes for unsocial network," and "Faceblock."

An article about how fake news would replace credible journalism in Australian feeds carried the headline, "'Fakebook' shows all it cares about is profit, not people."

The blockade was a response to the passage of a bill by the House of Representatives on Wednesday night that would make Facebook and Google pay Australian media companies fair compensation for the journalism that the platforms link to. The legislation must be approved by the Senate to become law.

Google has responded by quickly working out licensing content deals with major Australian media companies under its own News Showcase model.

Rupert Murdoch's News Corp. has announced a wide-ranging deal with Google covering operations in the United States and Britain as well as Australia. Major Australian media organization Seven West Media also reached a deal earlier in the week. Rival Nine Entertainment is reportedly close to its own pact, and state-owned Australian Broadcasting Corp. is in negotiations.

Morrison said he discussed the Facebook dispute with Indian Prime Minister Narendra Modi on Thursday. Morrison was also discussing Australia's proposed law with the leaders of Britain, Canada and France.

"There is a lot of world interest in what Australia is doing," Morrison said. "That's why I invite, as we did with Google, Facebook to constructively engage, because they know that what Australia will do here is likely to be followed by many other Western jurisdictions."

Treasurer Josh Frydenberg, the minister responsible for the proposed News Media Bargaining Code, had a phone conversation with Facebook chief Mark Zuckerberg after the blockade began Thursday and again Friday.

"We talked through their remaining issues & agreed our respective teams would work through them immediately. We'll talk again over the weekend," Frydenberg tweeted Friday. 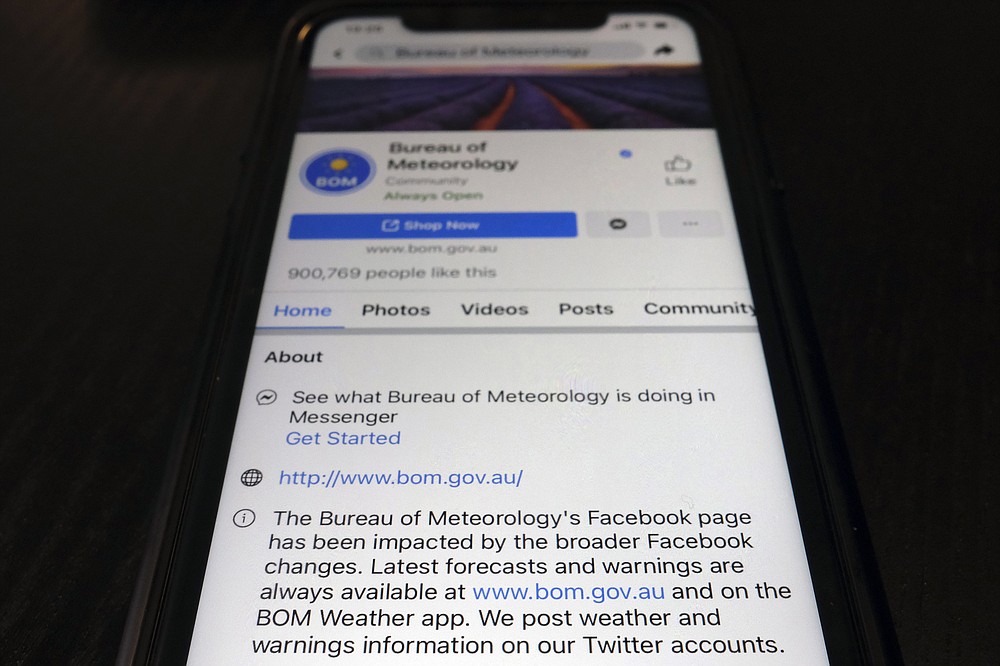 A disclaimer is shown on the bottom of Australia's Bureau of Meteorology page on the Facebook app Thursday, Feb. 18, 2021, in Tokyo. Australia's government has condemned Facebook over its shock move to prevent Australians sharing news that had also blocked some government communications. The Bureau of Meteorology's weather warnings, a Hobart women's shelter and the Betoota Advocate, a satirical website named after an Australian ghost town, were among those surprised to find their content blocked at least temporarily. (AP Photo/Kiichiro Sato)
ADVERTISEMENT