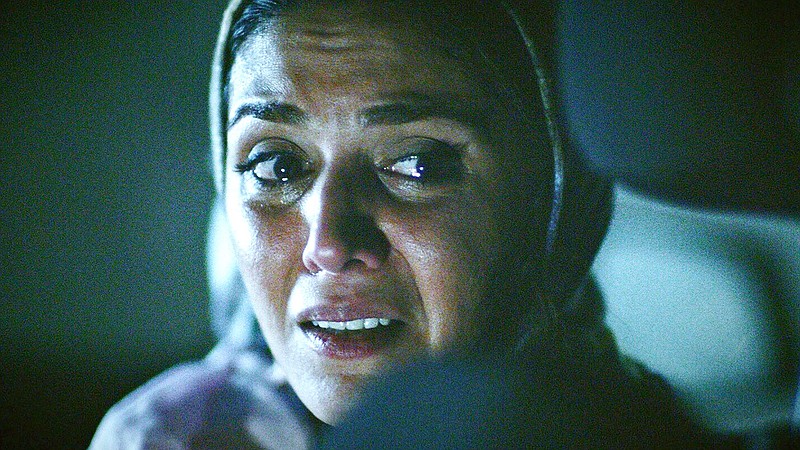 Neda (Niousha Noor) and her husband find themselves trapped in a California hotel beset by demons — real and imagined — until they can confront the secrets in their marriage in “The Night.”

Every parent of a newborn becomes acutely aware of that extended period of sleep-deprived misery that carries the child from birth to infancy. For those punishing months, you live in a sort of perpetual, half-awake haze, dreams bleeding into reality, reality into nightmares, and back again in a sort of doom down-spiral.

Iranian director Kourosh Ahari has seized upon this volatile time period as the backbone of his horror film, in which a young, well-to-do Iranian couple (the wife having recently arrived in the United States) spend a fateful night in a hotel in an unnamed California city (appearing to be L.A.), and have their worst fears exploited against them.

The couple are Babak Naderi (Shahab Hosseini), who came to the States some years ago, and Neda (Niousha Noor), who finally came to join him in time for the birth of their daughter, Shabnam (Leah Oganyan). When we first meet them, they're enjoying the company of some old friends, spending some quality time playing a version of "Mafia," and, in Babak's case, throwing down shots with his doctor friend, Farhad (Armin Amiri).

Despite the genial nature of the scene, things seem oddly amiss from the start: Babak, suffering from a toothache, stares into the bathroom mirror at his friend's house, and thinks he sees someone standing behind him; we watch from Shabnam's POV, the discomfiting view of the darkened room from which she has been placed into a porta-crib; Farhad, an ER doctor, starts to tell Babak a story about a recent DOA patient of his, before getting cut off.

The discombobulation continues when the couple decide to call it a night and head home. Against his wife's wishes, Babak insists on driving even while drunk -- he is, we determine, still plenty Middle-Eastern chauvinist, despite his relocation -- but they get lost, their GPS unable to locate them, and they end up driving down deserted alleyways, running afoul of an angry black cat they may or may not have hit (hurt or not, it sits with glowing eyes, growling at Babak). At a loss, and getting more anxious, they decide to pack it in and stay in a downtown hotel for the night, the closest one being the Hotel Normandie, an old but stately place on the edge of nowhere in particular.

It doesn't get any more coherent for them from there: Babak, unable to sleep for long, wakes to his daughter's unhappiness in the other room, and keeps thinking he sees his wife in other parts of the hotel; Neda hears a small boy's voice call out to her wherever she goes; somebody keeps thumping on their door; and when they call the cops to investigate, the officer (Michael Graham), doesn't take them seriously.

Ahari so packs his film with potential causes of the couple's affliction -- their pair of just-etched complex, half-moon shaped tattoos; the cat they affronted; the booze that Babak finds so "disagreeable" -- it helps throw us off the trail of what he's really detailing until closer to the end, after Neda runs back into a homeless man they initially disregarded entering the hotel, and discovers his at-first incomprehensible gibberish is, in fact, Farsi, telling her "They hear the truth, morning comes."

While, generally, horror movies in which everybody seems to be off-kilter in service to the filmmaker's conceit aren't always the most effective vehicle, Ahari employs a visually vertiginous style, a series of pans, swoops, swirls, overheads, and, in one memorable entry, flipping the shot upside down as a means of furthering the clutter of confusion the characters are enduring. The carefully rendered sound design, which uses a looping combination of water drips and neon buzzing to clarify the atmosphere in the hotel bedroom, further amplifies the tenuousness of the couple's sanity.

It's a carefully laid-out picture, albeit perhaps a bit too restrained to become anything more than solidly unnerving. Still, strong moments abound -- the hotel itself, with its unfashionably old architecture, and endless side corridors, becomes a tremendously moody setting; and the sense of history between Babak and Neda (She: "Have you gone crazy again?"), their ambivalence about each other outside their devotion to their baby, adds a strong kick to the punchbowl. The slow-drain torture of restless babies proves to be fertile ground, it would seem, from which to plunge into parents' darkest nightmares.

Available to buy or rent through various streaming services