Rotation is set for openers 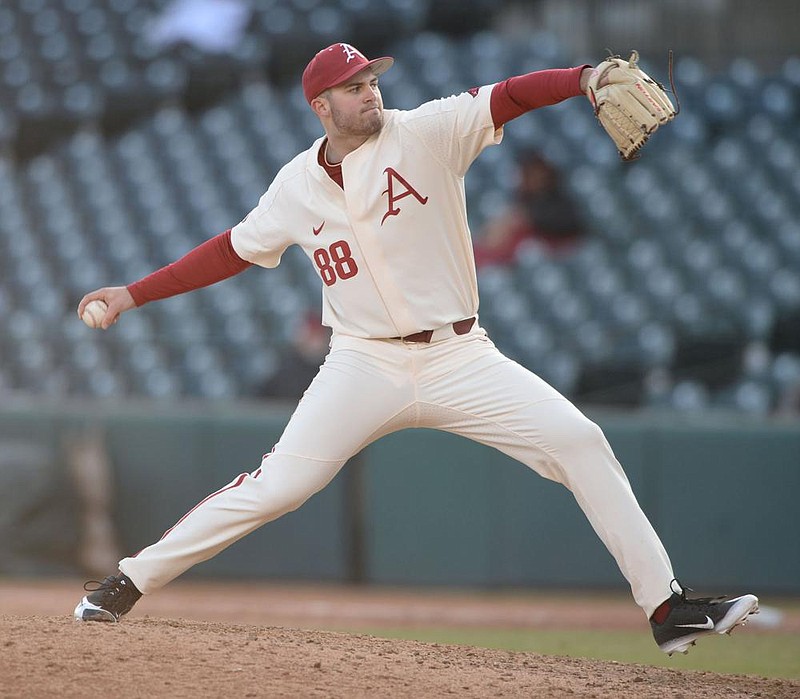 Right-hander Zebulon Vermillion will start on the mound for the University of Arkansas in its season opener against No. 3 Texas Tech on Saturday. Right-hander Peyton Pallette is slated to start against No. 9 Texas on Sunday and left graduate transfer Lael Lockhart will face No. 10 TCU on Monday. (NWA Democrat-Gazette/Andy Shupe)

FAYETTEVILLE -- The intense competition for a starting pitching assignment on opening weekend for the No. 8 Arkansas Razorbacks went not to the team's veteran starters but to two guys who were in the bullpen last year and lefty graduate transfer Lael Lockhart, who was pitching for the University of Houston in 2020.

University of Arkansas Coach Dave Van Horn announced on Thursday that right-hander Zebulon Vermillion would start Saturday's 7 p.m. season opener against No. 3 Texas Tech at the College Baseball Showdown in Arlington, Texas. Sophomore right-hander Peyton Pallette is slated to start Game 2 on Sunday against No. 9 Texas, and Lockhart is set to face No. 10 TCU in Monday night's finale.

[Video not showing up above? Click here to watch » https://www.youtube.com/watch?v=kTsC9MZS9OU]

"If he only gives us three or four [innings] this first weekend, we're good with that," Van Horn said. "We'll just continue to build him up. I just want his innings to be quality."

"Zebulon, he's a team player 100 percent. If he starts, he's fine with that. If he ends up pitching at the end of the game, he's good with that as well. He's going to be a big part of this pitching staff, that's for sure."

"He's got a really good breaking ball and what he does is he throws strikes. He competes, he can field his position. The future's bright if he stays healthy."

"It means a lot," Palette said. "If it says anything, my dad didn't let anything in the house that was orange."

Van Horn said Lockhart could be plugged in at several spots on the pitching staff.

"He could pitch out of the pen, be a spot guy, middle reliever," Van Horn said. "Obviously we're starting him. His last outing was really good.

"I just saw that Lael threw extremely well this past weekend and sometimes it's good to see what you've got from the left side."

"A lot of people were concerned that it wasn't clear cut there for a while," Goodheart said. "I kind of look it at more of a good thing because ... they made it difficult to choose because so many guys were standing out in a good way. So many guys were going out there and getting competitive outs every day. I'm excited for it."

"It's more about depth and just going with the guys that have been more consistent at the beginning," Van Horn said after announcing his projected starters in Arlington, Texas. "I think both [Noland and Wicklander] are going to be a huge part of our pitching staff, whether they're starting or coming in for long relief. You know some roles are still out there."

Van Horn said Wiggins could work some innings this weekend then perhaps be in line to start the first of a four-game set against Southeast Missouri State next Thursday.

After the duo of right-handers Zebulon Vermillion and Peyton Pallette, Van Horn said there were several others who could have taken the third starter spot.

The extra depth in pitching and among the position players due to a shortened MLB Draft will make accepting roles more important with this team, Van Horn said.

"We've had a few discussions with that about the whole team, and then individual position groups, about being a good teammate and being a team player and pulling for each other," Van Horn said. "Sometimes things don't start out the way you want them but you've got to work your way in, and you know it's a long season. If we're going to be good, those guys are going to have to buy in to whatever role they have."

Texas Tech has announced senior LHP Patrick Monteverde as its starter against Arkansas on Saturday.

Monteverde (6-2, 190) is a transfer from Division II Seton Hill (Pa.), where he pitched sparingly the past two years. Monteverde missed most of the 2019 season after Tommy John surgery, and pitched 22/3 innings last year.

Texas plans to start junior right hander Tristan Stevens (6-2, 200) against Arkansas on Sunday and TCU will start sophomore left-hander Austin Krob (6-3, 205) against the Razorbacks on Monday.

Stevens pitched against the Razorbacks in 2019 when the Longhorns won 7-6 in the second game of a two-game series in Austin. Stevens recorded outs on the only two batters he faced. Stevens went 2-0 and had a 1.50 ERA in 6 innings as a reliever last season. He led Texas with 23 appearances in 2019 when he had a 5.31 ERA.

Krob did not allow a run in 112/3 innings out of the bullpen last season.

The award, organized by USA Baseball, is given annually to the best player in college baseball, and it was won by the Razorbacks' Andrew Benintendi in 2015.

Franklin hit .381 with 3 home runs, 11 RBI and a team-high 21 runs in 16 games in the shortened 2020 season after earning SEC All-Freshman honors the year before. A native of Overland Park, Kan., and a team captain, Franklin gleaned preseason first-team All-America nods from four baseball publications this winter.

Texas Tech outfielder Dylan Neuse, the Big 12 preseason player of the year, also made the list.

Arkansas coach Dave Van Horn said Thursday he thinks the College Baseball Showdown will still be played this weekend while Texas recovers from a week of energy and water shortages.

"We haven't been told anything different," Van Horn said. "We talked to some of the administrators of the tournament a couple of times yesterday. They said they're still ready to go."

The No. 8 Razorbacks will be joined by Ole Miss and Mississippi State from the SEC and Texas Tech, Texas and TCU from the Big 12.

Travel concerns caused tournament organizers to push the event back one day. It was originally scheduled to begin today.

Weather conditions are forecast to improve in Arlington by the weekend. The high temperature in the city will be near 60 degrees Sunday and Monday, according to the National Weather Service.

Globe Life Field has a retractable roof that allows for the games to be played in a controlled climate.

The broadcast team for Saturday's Arkansas vs. Texas Tech game is Scott Galetti on play-by-play and Pat Combs, a former Philadelphia Phillies pitcher.