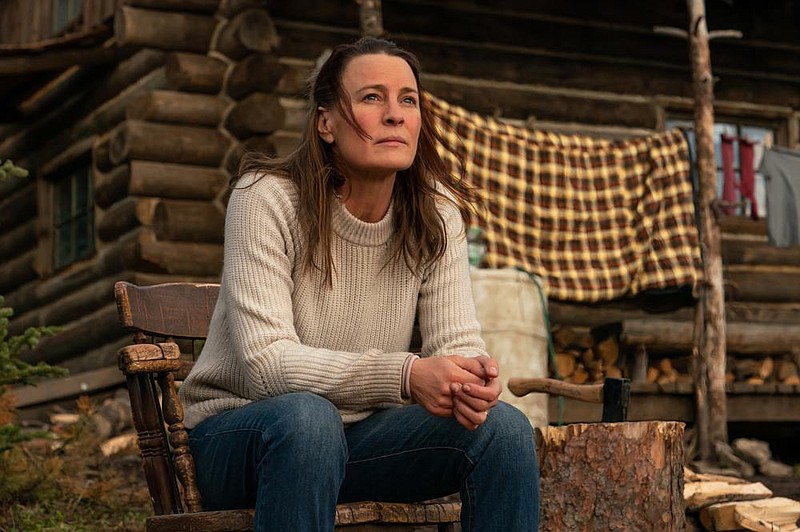 Edee (Robin Wright) is a woman who strikes out for an off-the-grid cabin in Wyoming in “Land,” which she also directed.

Say what they might about their ultimate incompatibility as a couple, Robin Wright and Sean Penn, who were together tempestuously for nearly two decades, appear to have at least shared a penchant for helming similarly overwrought melodramas. Wright's directorial debut, concerning a woman who endures an emotional trauma by moving away to a literal cabin in the woods, is every bit as overripe as anything her former husband might have made.

Wright also stars in "Land," as Edee, a woman who has recently endured the mysterious loss of her husband (Warren Christie, seen in flashback), and young son (Finlay Wojtak-Hissong). With nothing else to hold her, and the comfort of her sister (Kim Dickens) falling on deaf ears, Edee flees Chicago, and begins a new life up in the wilderness of the Wyoming mountains. Sight unseen, she buys a small, somewhat dilapidated log cabin much in the middle of nowhere, and instructs the seller to have her rental car and camper picked up, so she's completely alone (and ridiculously vulnerable).

Despite her acting with such conviction, it soon enough becomes clear she has no idea what she's doing out there: She can't saw anything, can't decently chop wood, has no clue how to hunt or trap, or grow vegetables, and, one winter morning as she heads over to the outhouse, she idiotically leaves the front door open which enables a black bear to avail himself of her remaining provisions.

Facing starvation and suffering, Edee attempts to soldier on, but is soon overtaken by hunger and cold, lying in a heap on her wood floor as if flung down from above, it's clear without intervention, she's not long for this world. Help eventually comes in the form of Miguel (Demián Bichir), an area hunter, who ventures into the cabin after having remembered seeing smoke coming from the chimney earlier. He brings in his friend Alawa (Sarah Dawn Pledge), a nurse at the local hospital to help bring her back from the near-dead.

So, Edee, a privileged white city-slicker with dreams of Walden Pond being met by a Donner Party reality, is saved from her arrogance by a Latino and a Native American, having to sacrifice their own time and money to save this privileged Karen from herself. Despite the tragic events that might have led Edee to take such drastic action, her arrogant assumptions, and huge over-estimation of her survival abilities smacks of the kind of assumed exceptionalism that puts everyone else around her in danger.

We are no doubt meant to find her plight sympathetic, but her rigidity, backed by the feeble attempt at planning out her adventure (we see her dutifully scribbling down notes as she gazes upon a topical map of the wilderness around her, but it's painfully clear, she has no idea of what to do with the information), just makes her come across as irrationally overconfident, and infuriatingly unprepared.

It's an exasperatingly tired trope, even if it does lead Edee to accept Miguel's offer to teach her how to survive in the wilderness she has chosen. Over time, she learns from his example, and becomes competent, but by then, the damage has already been done. As the two spend more time together, they become closer, but only by degrees: Whatever has led her to this place has also made it so she wants as little human contact as possible. Such is her desire, that she totally cuts her well-meaning sister out completely, throwing her phone away in disgust before heading up into the mountains for the first time.

As such, they don't talk terribly much -- a rare strength in the script by Jesse Chatham and Erin Dignam -- we aren't subjected to much of their inner thoughts, but Miguel has also lost his family, his wife and daughter in a car wreck, so the two broken souls can sit outside among Wyoming's natural splendor, and heal among the trees and the heavens.

As a director, Wright shows little verve (her transitions often feel rushed, exacerbating the tendency of the screenplay to move artlessly from one scene to the next), but she at least realizes the sin it would be to set her film in such a stunning setting -- it was shot in Alberta -- without taking full advantage of it. She populates the film with sweeping shots of the mountains, and the leaves, and the variety of animals who wander around the pristine forest.

It is never easy to depict actual, raw grief, which is all-encompassing and largely deadening, yet its gravitational pull, especially to actors who yearn to portray such dedicated misery, is fierce. There is an artfulness -- an entire world of art, actually -- that engages a character with an audience, makes us feel invested in their sufferings and triumphs. It's not just about the clarity of their plight, or the painful circumstances of their experience, there's the sense of care and worry, as when we see a young child fretfully searching for their parent in a crowded park, that draws us in. Edee is so two-dimensional in her suffering, as much as the film wants us to care about the specific details of what happened to her family, we simply don't. Her journey is inert, and all the most beautiful natural world vistas in the world can't make it any more compelling.