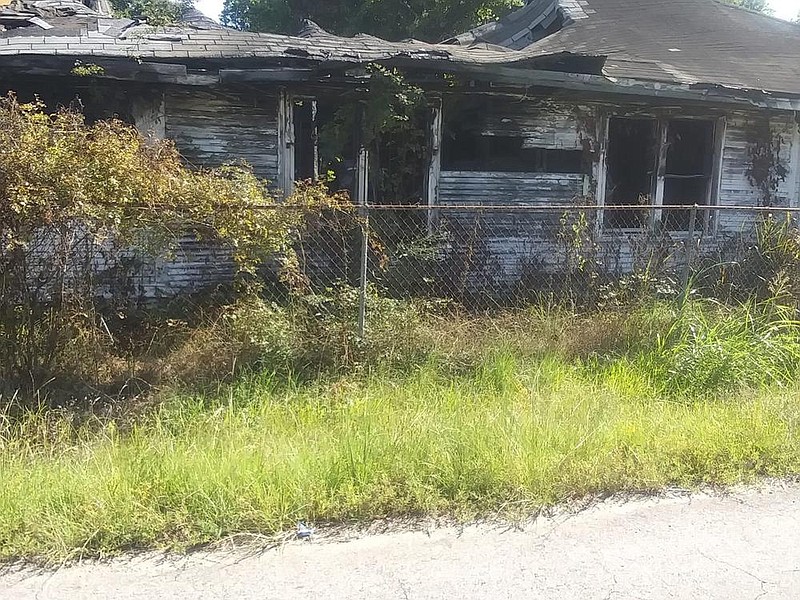 A blighted house sits at the corner of Second Avenue and Sycamore Street across from Mount Nebo Missionary Baptist Church. (Special to The Commercial)

A program designed to motivate Pine Bluff city government and department heads to address complaints and neighborhood issues in a timely manner is seeing results after nine months of implementation.

City council member Steven Mays of the Fourth Ward said the 'The Fix-It Now Program" came to him in a vision about a year ago.

Just two weeks ago, a burned out home on the corner of Second Avenue and Plum Street next to Yancy's Furniture Co. was demolished by the Pine Bluff Urban Renewal Agency.

According to Mays, the house had been in a blighted condition for years.

"It was a burnout that had trash all around it that kept coming back every time we picked it up," said Mays. "I met with Mr. Taggart and we talked about getting that done and now the house is gone."

Maurice Taggart, executive director of the Pine Bluff Urban Renewal Agency, said having all types of partnerships is a step in the right direction.

"One of the main things that we have tried to stress as it relates to the removal of blight is we need all hands on deck," said Taggart. "... community organizations, elected officials, and city departments."

Mays agreed and said as a city council member, he has direct contact with all of the department heads and can get the information to them a lot quicker than the citizens can.

"I try to do that to the best of my ability to respond to the citizens," he said. "My job as a city councilman is to help our citizens on community issues."

Another blighted home sits at the corner of Second Avenue and Sycamore Street.

Mays has also collaborated with neighborhoods to rid litter on a daily basis instead of waiting for a community cleanup.

"My motto is I work for you, Pine Bluff, and that's what we're doing," said Mays. "I want people to come out of their homes and enjoy their neighborhoods."

Other projects Mays said he is working on include clearing weeds and grass in neighborhoods for future community gardens and getting a homeless shelter in place.

"This is something we are looking at but we have to do that," said Mays. "We have to be more proactive than reactive to these situations in the city."

With each passing year presenting the same problems, Mays said he is expecting his program to fix community issues right the first time for the betterment of the city by working together.

"Our thing is to fix it now because we've been dealing with some of these same issues since I've been on the city council," said Mays. "This is a good community to raise your family and we have to get to that point by fixing things now in our community."