A tale of three breweries: Pandemic has surprising impact on beer scene 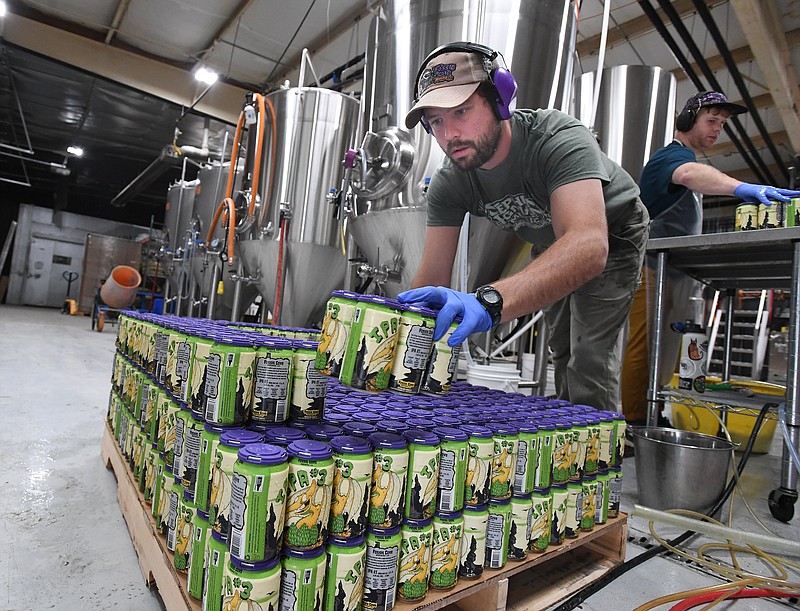 Editor’s Note: This is the second in a new monthly series that will consider food and drink — not recipes so much as the conversation about food, about chefs, about trends, about people who influence the culture of eating. So if you have a favorite chef, a favorite author, a favorite mentor in culinary magic, please send an email to [email protected] nwadg.com. This story comes from Abbi Ross, a journalism student at the University of Arkansas.

What is there to do when businesses close their doors, grocery stores run out of toilet paper and the entire family now works and goes to school from home? Drink — or at least that’s what many Americans decided to do. For breweries in Northwest Arkansas, adapting to this demand and the new norm meant changing business models from place to place.

Core Brewing Company, a brewery based in Springdale, was one of few that thrived during quarantine and during Phase 1 of the reopening, when many businesses were either forced to shut down completely or had to scale back immensely because of the covid-19 restrictions. During this time alcohol sales outside of bars and restaurants surged by around 24%, according to sales data released by Nielsen.

Core’s saving grace during a time that so many were struggling was that they are more distribution focused than taproom focused, says Shelton Wooley, 25, the creative director and head of marketing for Core Brewing.

“We were very lucky because our model here as a brewery in Northwest Arkansas is very distribution based, it’s very retail-based,” Wooley says. Core distributes its beer and hard seltzers to liquor stores and businesses throughout the region.

Many breweries are really successful in their taprooms, Wooley says. Core shut down many of its own in mid-2019 to better focus on distribution. That focus and the small size of the company meant that Core continued working during the quarantine period when it seemed that all people wanted to do was drink.

For breweries with a taproom focus, like Fossil Cove Brewing Company in Fayetteville, the pandemic meant cutting one of their most important sources of income and switching their business models completely in a matter of days.

Fossil Cove did a little bit of it all, from to-go orders to delivery and curbside pick up.

The company went from distributing its product to more than 100 different on-premise accounts, like bars and restaurants, to only five in a matter of days at the beginning of the pandemic, says Andrew Blann, 34, the marketing director for Fossil Cove.

With Gov. Asa Hutchinson’s March 19 mandate closing restaurants to dine-in customers, the company turned toward ways to serve people the beer they love without them coming inside for it.

Fossil Cove quickly switched to a home delivery, curbside and beer-to-go pick-up model, Blann says. For two months, that is how the company made it through. They delivered in Fayetteville seven days a week and to other cities on certain days.

Like Core, Fossil Cove also distributes to liquor stores, bars and restaurants throughout the region.

“Liquor stores [sales] picked up to a volume we hadn’t seen before just because of the increase in demand and the changing consumer habits,” Blann says.

That increase helped keep the business going but did not put it ahead.

“We definitely saw an increase in sales and demand for our canned and packaged beer, but it really just offset the losses we initially faced with losing all of the draft beer and keg beer sales,” Blann says. “It helped balance it.”

For Core, the increased sales meant an uptick in business.

“During quarantine, that’s basically all anyone did was drink. … as weird as it sounds, covid helped us a lot,” Wooley says. “Covid kind of kick-started a whole other level for us.”

People were stuck at home and wanted to drink more, and that opened up a lot of opportunities for people to try new products they might not normally try, Wooley says.

“[During] quarantine, we were very, very fortunate,” Wooley says. “ A lot of breweries had to make some really big sacrifices to stay open and in businesses.”

For companies that do not distribute, the shutdown meant a total reimagining of how they ran their businesses.

“It’s definitely been a challenge,” says Liz Slape, 45, the co-owner of Crisis Brewing Company in Fayetteville. “The biggest challenge came when they basically closed us down for everything but to-go. We immediately had to rethink our whole model. We don’t package.”

Without distribution sales to rely on, Crisis Brewing had to make the best of the situation and the option that beer and wine could be sold to-go for off-site consumption, a decision that came from the Arkansas Alcoholic Beverage Control agency on March 19.

“That was a really scary time for us, but we put up a tent outside and did to-go business,” Slape says. “People were super supportive, and it kept us going through those months when we could only do to-go.”

People were able to bring their own containers or purchase growlers from the brewery and could call to place their orders ahead of time, Slape says. They also invested in a “crowler” machine, a canning device designed to seal 32-ounce cans of fresh craft beer to go, to use during the to-go only phase.

Sales are up since their taproom has reopened, but it is a constant effort to keep patrons safe and comfortable.

The major shutdown phase of the pandemic may be over for now, but the ongoing case numbers and fear of future restrictions means that brewers have not stopped adapting and trying to find ways to help their businesses thrive.

Crisis Brewing has continued patio renovations to keep up with the seasons and to create a space where people can gather comfortably and safely outside.

This continued drive to adapt and overcome means even more time and money. In recent months Fossil Cove employees have expanded their patio, renovated the bar space and started opening at 7 a.m. to give people who work from home another space to gather.

“You’re never resting, you’re always having to rethink and reinvent to make sure that you’re doing everything you can to make it comfortable for people,” Slape says.

Along with renovations to improve these establishments comes the needed support of the community to keep them and other local businesses up and running.

“If you want to see breweries and your favorite bars and restaurants open at the end of this, then you have got to support them now, however you can,” Blann says. “…There is no guarantee that anyone is going to be open at the end of all this.”

Abbi Ross is a senior majoring in journalism at the University of Arkansas. She currently serves as editor-in-chief for The Arkansas Traveler and hopes to find a job as a reporter after graduating in May of 2021.This story was written as part of her studies at UA and is used in the NWADG with her permission. Email her at [email protected]