Heat back on for some gas customers in Pea Ridge 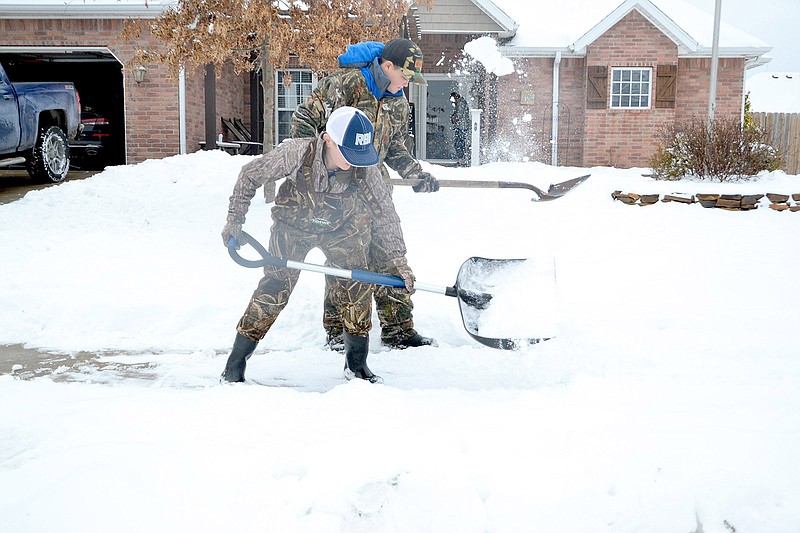 Gavin Carter and Landon King, both 12, shovel snow off a sidewalk in Summit Meadows in Pea Ridge where they've been clearing walks and driveways for neighbors during the recent snow storms.

Crews from Black Hills turned off all the gas meters by 10 p.m. Tuesday and repressurized the system shortly after midnight. The service was interrupted by low pressure in a line.

Crews were going door to door to turn on gas meters, do safety inspections and start pilot lights. By mid-day, the company estimated the heat was back on for about 30% of the customers.

Bart Haake with the National Weather Service office in Tulsa, Okla., said the most recent storm dumped 3 to 4 inches of snow across Northwest Arkansas by Wednesday morning. Haake said the snowfall from the two storms that started Sunday was 6 to 8 inches across the region.

The Weather Service forecast calls for high temperature today in the mid-20s and the overnight low to go down to single digits again.

[Don't see the video above? Click here to watch: https://www.youtube.com/embed/MB3FwSX8x24]

Peter Main, spokesman for Southwest Electric Power Co., said the demand for electricity peaked Wednesday morning and didn't anticipate more controlled outages. SWEPCO and other electric utilities implemented a series of rolling outages to reduce demand on the electric grid managed by the Southwest Power Pool. The pool covers 14 states, including part of Arkansas. The utilities are asking customers to continue energy-conservation measures.

Road department officials in Benton and Washington counties said crews are working to plow snow from roads and asked motorists to be careful and limit driving. Many main roads were snow covered but should be passable today.

In Pea Ridge, city and school officials provided a shelter at the Pea Ridge Middle School gym for residents who had the gas turned off. No one used the shelter through midday Wednesday, according to city officials.

"The shelter will remain open and heated until city officials receive confirmation that everyone's heat has been restored," said Lt. Michael Lisenbee of the Police Department. The shelter was stocked with donations of water and food.

"If heat's getting restored, nobody's going to come here so we shifted our priorities -- we've got all this food and all this water; some of the food is perishable -- bananas and oranges," he said.

"We decided to make packages up, and we're going to get them to families the School District knows are in need. We're going to take them to 24 families," Lisenbee said.

"I'm really astonished that nobody came at all, but I think it has to do with people hoping the gas would get restored last night," he said. "A lot of people probably didn't want to leave their homes, their pets and decided to tough it out."

Tom Sheets with the Pea Ridge Street Department said the temperature in his house dropped to about 59 degrees without the natural gas heat.

[Don't see the video above? Click here to watch: https://www.youtube.com/embed/7Gcf0yBbKjY]

Fort Smith was also experiencing a gas shutoff, but for a different reason.

The city was notified Fort Smith-based Arkansas Oklahoma Gas Corp. was experiencing up to 33% cuts to its gas supply from upstream pipelines.

Arkansas Oklahoma Gas provides natural gas to about 60,000 residential, commercial, industrial and agricultural customers. It purchases gas from a number of suppliers and receives it via an interstate pipeline, according to Lizzy Reinholt, the company's senior director of sustainability and corporate affairs.

The supply shortage forced reduced delivery to industrial and commercial customers, excluding those such as hospitals and assisted living facilities that provide human needs, according to a company news release.

The company also shut down its Fort Smith area compressed natural gas stations. Reinholt said the company will turn the stations back on when supply permits.

"We are hoping to be able to begin restoring service by Friday to commercial and industrial customers who have been turned off," Reinholt said. "It's important to note that these shortages are being driven by supply constraints beyond our control." 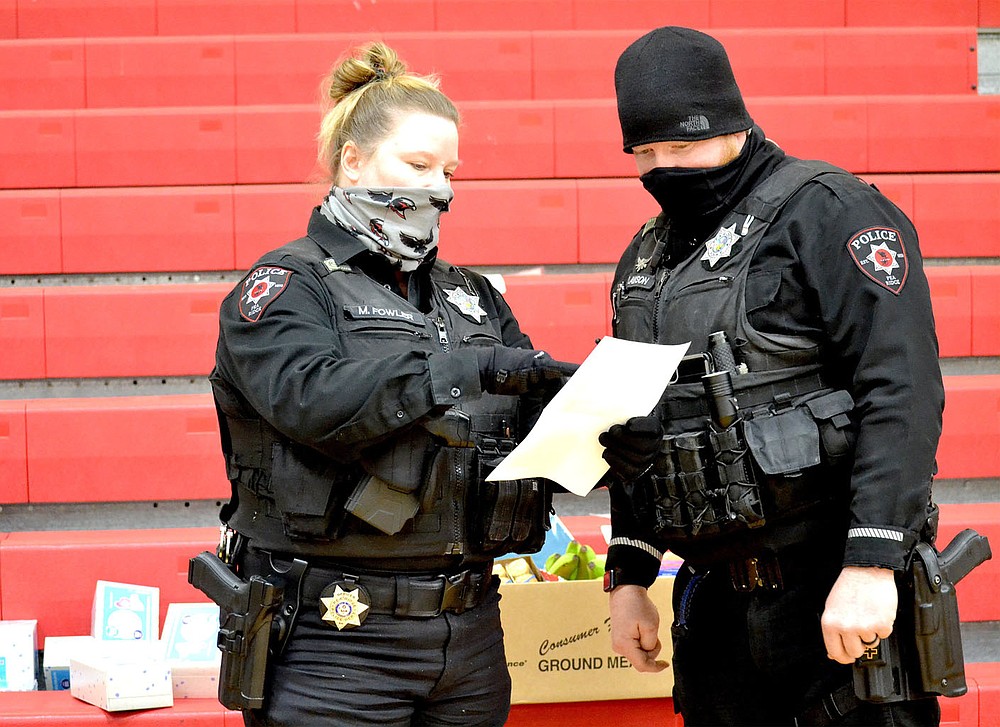 Pea Ridge Police officers Mindy Fowler and Justin Lawson check off a list of supplies for families during the natural gas outage in Pea Ridge Wednesday, Feb. 17, 2021. Supplies gathered for the warming station were delivered to families in need Wednesday by police officers.