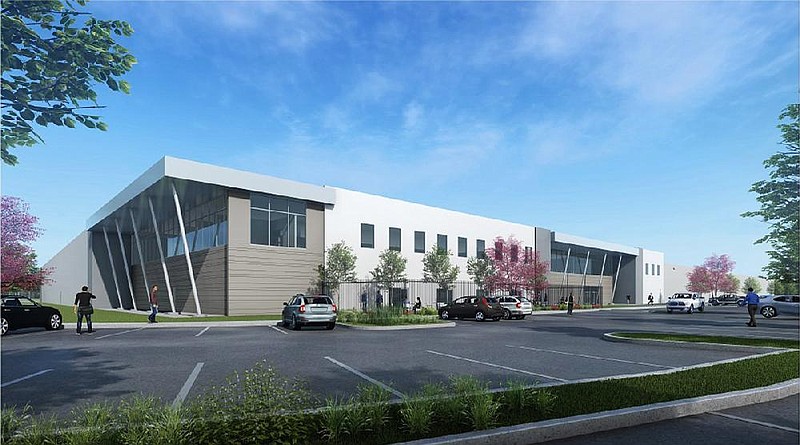 An artist’s rendering shows how CZ-USA’s North American headquarters and firearms production plant will look when work is complete at the 75-acre site on land owned by the Port of Little Rock. More photos are available at arkansasonline.com/424czechplant/

The land that the Port of Little Rock gave CZ-USA to build its North American headquarters and production facility is all but certain to revert to the port if the Czech arms maker doesn't meet a June 1 deadline in the land agreement to begin construction.

The $90 million investment, which was expected to create 600 jobs, is on indefinite hold after CZ-USA's parent company agreed to purchase the American gunmaker Colt, a deal that was announced Friday.

"We still have an agreement that is valid until June 1 this year for them to commence construction," Jay Chesshir, president and chief executive officer of the Greater Little Rock Chamber of Commerce, said Wednesday. "But the likelihood of that happening is probably very, very slim if not downright impossible."

Chesshir's comments came at a briefing on the project at Wednesday's monthly meeting of the Little Rock Port Authority board of directors, who committed to provide CZ-USA a 73-acre tract within the port's property as part of the incentive to land the project, announced with great fanfare by Gov. Asa Hutchinson almost two years ago.

They also came a day after a company executive told the Arkansas Democrat-Gazette that the project would be delayed for three to five years to allow it time to digest the Colt acquisition.

CZ-USA's parent company, Ceska Zbrojovka Group, had two ways to move into the U.S. market, Chesshir said. One was to build its own headquarters and production facility; the other was to acquire the assets of another gunmaker already in the United States. Chesshir said he and other officials were aware of the company's two-pronged approach.

"Obviously in 2019 the company made the decision to do the former, which is why we had the announcement that we did," he said.

But delays beset the project almost from the beginning. Chesshir said they included an "IPO, covid and other issues," all of which he said were beyond the company's control.

The delays gave Ceska Zbrojovka Group time to revisit the other option.

The company announced Friday it purchased all the shares in Colt Holding Company LLC, the parent company of Colt Manufacturing Co. LLC and its Canadian subsidiary, Colt Canada Corp.

The deal is worth $220 million and 1,098,620 newly issued shares of Ceska Zbrojovka Group and is subject to approval by regulators. The Czech company said it expected the transaction to be completed in the second quarter of 2021.

"They obviously did their due diligence," Chesshir said. "I can tell you we knew that they were looking at other companies as well that were in the process of being liquidated."

He said he was on a call with company officials on Monday to "walk through" where everything stands.

"Obviously, the regulatory approval will take quite some time and while no one expects it to not go well, there's always that option," Chesshir said. "But, the reality is, that puts this project on hold until the company first of all can get through that process and assimilate the assets of Colt, what those assets are and how they can best utilized from a production standpoint moving forward."

He suggested that, based on conversation with Ceska Zbrojovka Group executives, the Colt acquisition won't fully address the company's production capacity issues.

"Their purchase of Colt is a huge opportunity for them, but the production capacity that CZ originally needed when making this decision still doesn't go away," Chesshir said. "In fact, it might actually be enhanced because of this acquisition."

But if the company isn't coming to Little Rock in the three to five-year time frame it outlined Monday, Chesshir suggested a new deal will be needed.

"While [we] will go through the process of having the land revert back to the port, obviously the state's incentives no longer will be in effect," he said. "What we're telling the company is that once they get through this process and the assimilation of that acquisition and once they determine what their production capacity needs are that point in time, we certainly want them to revisit the possibility of them looking at Little Rock and the port in particular to build whatever their next capacity needs to be."