Given weather, it's on to postseason for basketball teams 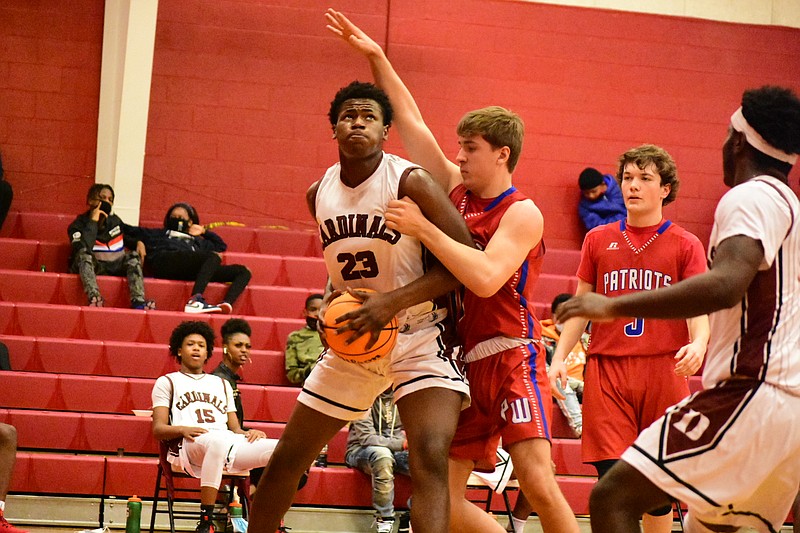 Unlike most high school basketball teams in Jefferson County, playing a conference or district tournament is not a necessity for the Dollarway Cardinals.

The ongoing snowfall that has covered an entire state might have made playing a tournament all but impossible for small-school conferences, but in Conference 3A-6, which includes the Cardinals, it's a moot point.

Dollarway completed its conference slate a day before the first snowflake dropped in Arkansas' latest snowstorm. The Cardinals (11-7, 10-4 in 3A-6) won at DeWitt 52-29 last Saturday to finish four games ahead of Palestine-Wheatley for the fourth and final playoff seed from the conference. But to not play would have resulted in an unequal amount of conference games for every team and would have created a dilemma of if and when to play a tournament in order to qualify for a region tournament.

Dollarway will play in the 3A Region 3 tournament at Central Arkansas Christian in Little Rock at 7:30 p.m. next Wednesday against the 3A-5 champion, which Coach James Jones said is likely Mayflower. Each team that wins the first round of its region tournament automatically qualifies for the state tournament in classes 1A-4A.

Region events are not contested in classes 5A and 6A. In 5A, which includes Pine Bluff and White Hall, the top four seeds in each conference go directly to the state tournament. In 6A, the top six seeds advance.

The challenge for Dollarway now is preparing to play again when practices can't be held.

"We're going to get on Zoom," Jones said. "They've been watching the games. They have their own Hudl account. ... I'm going to start Zoom [today] all through Monday so we can watch the games and point out some things, stop it and get on the whiteboard where we can draw X's and O's and whatever."

Hudl (pronounced "huddle") is an athletic video website players and coaches use to analyze and distribute game highlights. Jones said he can transfer Hudl clips to Zoom for video sessions.

If Dollarway students return to campus Monday, Jones will have two days to get his players back in game condition.

"[Assistant coach Booker Mays Jr.] has already said, there's going to be some walkthroughs and conditioning," Jones said. "If you don't know it now, you're not going to know it. There'll be some breakdowns and conditioning and shooting and getting free throws in."

The Cards have won eight of their last nine, continuing a successful turnaround from midseason. CAC, the eventual conference co-champion, held Dollarway to 23 points in the Cards' only loss since Jan. 12.

"We're going back to CAC, too, which means we should play a little bit better," Jones said, adding tight rims at CAC factored in Dollarway's poor shooting there. "We could pull the upset. No. 1s have beaten No. 4s before."

CAC, Helena-West Helena Central and Jacksonville Lighthouse Charter School make up the top three seeds from 3A-6. Dollarway was in a three-way tie for the district lead before the loss at CAC.

Teams have struggled to play all of their conference games this season amid positive coronavirus cases and subsequent quarantines. Pine Bluff's boys and girls teams waited 36 days into the middle of January to resume playing, and the boys team won all 10 of their 5A-South Conference games in a 20-day span.

Thanks to the weather, the Zebras (12-3 overall), who have won 11 in a row, are catching a much-needed breather, although they cannot play their remaining four games. But preparing for a conference tournament game Tuesday without practices will be no easy task.

"It's challenging," fifth-year Zebras Coach Billy Dixon said. "It was challenging to get through the first round of playing three to four games a week, just trying to keep your guys motivated and we did. We kind of used the games as practice for things we needed to work on that we would have to use down the line. I very seriously doubt we'll get in the gym to practice."

Dixon said he'll likely conduct Zoom meetings and have his players "do some things" on their own.

"We're going to have to use those same three games, hopefully, for the conference tournament as another means of preparation for the next level."

Brackets were set for the 4A-8 tournaments before the snowstorm since not all teams completed their 14-game slates, but the conference this week elected to allow the top two teams on both the boys and girls sides to advance to the 4A South Region tournament in Star City next week while holding playoffs to determine the third and fourth seeds.

On the girls side, Star City (23-3, 14-0) and Watson Chapel (11-10, 9-4) are the first and second seeds. Warren will play Crossett and Camden Fairview will take on Magnolia for the last two seeds on Saturday.

The higher remaining seed after Saturday's playoffs will get the third seed into the South Region.