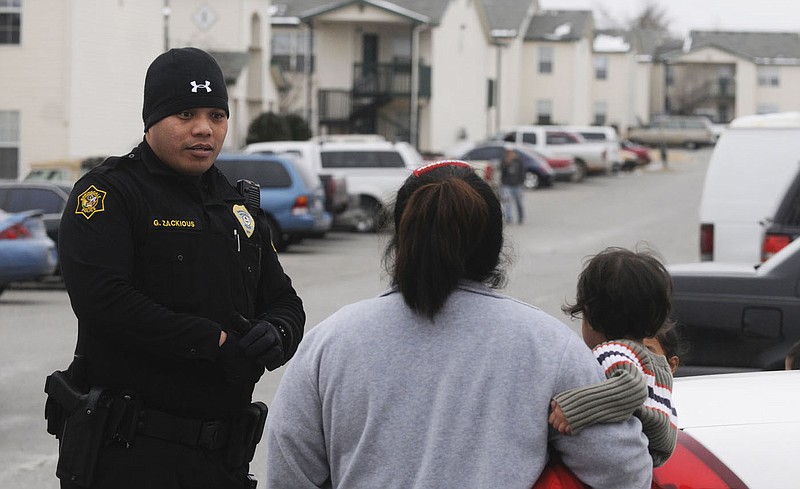 Springdale Police officer Gomez Zackious speaks Marshallese to a woman during an iinvestigation in 2010 in Springdale. Marshallese residents can serve in local law enforcement agencies if the state Department of Public Safety changes its rules, the agency said Wednesday. (File Photo/NWA Democrat-Gazette)

Marshallese residents can serve in local law enforcement agencies if the state Department of Public Safety changes its rules, the agency said.

Washington County Sheriff Tim Helder said he talked with Jami Cook, director of the department, and encouraged the agency to change the rules.

Finding more officers and deputies who can speak Marshallese, which has several dialects, is one reason for the rule change, Helder and Lt. Jeff Taylor, public information officer of the Springdale Police, have said. Other reasons include building trust with the Marshallese community and widening the pool of qualified applicants as a whole.

Citizens of the Republic of the Marshall Islands, a former U.S. trust territory, can freely come to the United States and stay, but they remain citizens of their home republic.

Entrance into the state's Law Enforcement Training Academy requires U.S. citizenship. House Bill 1342 by Rep. Megan Godfrey, D-Springdale, would have changed that. The measure failed to get through the House Committee on State Agencies and Governmental Affairs on Feb. 8. It failed in part because lawmakers questioned whether the change required a state law or a regulation change would suffice.

There are, however, two types of police required to be citizens by state law. The citizenship requirement cannot be waived in those two categories, Yarbrough said. One is Arkansas State Police. The other is nonsalaried reserve officers who assist local departments.

Godfrey called the news about the regulation route "great."

"The bill was a collaboration with local law enforcement and Marshallese leaders anyway, so eligibility for local and county officers is most pertinent, particularly in our community," she said.

"Our initial goal was to incorporate the Marshallese community into municipal and county law enforcement," Penzo said Wednesday. "I am glad this can be accomplished with a rule change. I am looking forward to working with our regulators to make this needed change so our Marshallese residents can serve our community."