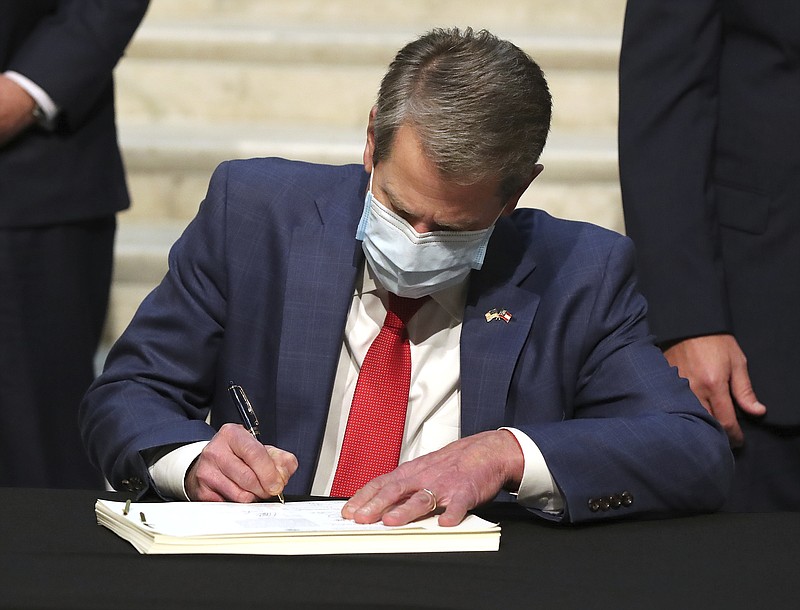 ATLANTA -- Gov. Brian Kemp faces a renewed political battle over his plan to revamp Medicaid in Georgia, with President Joe Biden's administration putting the proposal on hold a few months after it had won approval under Donald Trump.

Georgia officials got word from the federal Centers for Medicare and Medicaid Services on Friday that the status of Georgia's plan had been shifted from "approved" to "pending." Elizabeth Richter, the agency's acting administrator, said in a letter that the plan's eligibility requirement that recipients work or perform some related activity, such as attending college full time, would be "unreasonably difficult or impossible" to meet during the coronavirus pandemic.

The move came less than a month after Biden took office and just four months after Kemp's plan was approved by the Centers for Medicare and Medicaid Services under Trump's administration. In a statement Monday, Kemp's office accused Biden of attempting to "take away health care options for low-income Georgians hit hardest by the covid-19 pandemic," the Atlanta Journal-Constitution reported.

Kemp and fellow Republicans have touted their Medicaid proposal, called Georgia Pathways, as a more narrowly tailored, fiscally responsible alternative to a full expansion of Medicaid services under the Patient Protection and Affordable Care Act. The plan seeks to add an estimated 50,000 poor and uninsured Georgia residents to the Medicaid rolls in its first two years.

Democrats have criticized Kemp's plan as doing too little, saying it would leave at least 350,000 Georgia adults uninsured because they don't meet the threshold requirements. The holdup of Kemp's plan has some Democrats hopeful there may be an opening for Georgia to join the 38 states that have adopted full Medicaid expansions.

"We should take advantage of this," said state Rep. Scott Holcomb, a Democrat. "Scrap this bad plan and replace it with a full Medicaid expansion. Georgia will save money, insure more people, improve access to health care and boost rural hospitals."

Kyle Wingfield, who leads the conservative-leaning Georgia Public Policy Foundation, said Kemp should be given an opportunity to prove his plan works.

"We've seen work requirements successfully work with other welfare programs," Wingfield said. "And it would be disappointing to see the Biden administration pull the plug on it before it got a chance."

Like many other Georgia Republicans, Kemp has taken the same stand as his predecessor, former GOP Gov. Nathan Deal, that a full expansion would be too costly in the long run. Though the federal government would cover 90% of the cost, state officials have estimated Georgia's share would be $200 million a year.

However, there are efforts in Washington to make expanding Medicaid harder to resist. A proposal by a bipartisan group of U.S. senators would require the federal government to cover all expansion costs for three years before gradually reducing the federal share to 90% by the sixth year.

Kemp has 30 days to respond to the Biden administration's holdup of his proposal. He could try to renegotiate the waiver or abandon it altogether.

"It's a largely positive step forward," said Laura Colbert of the advocacy group Georgians for a Healthy Future. "But there's a risk that Gov. Kemp and state leaders walk away and leave low-income Georgians with nothing."