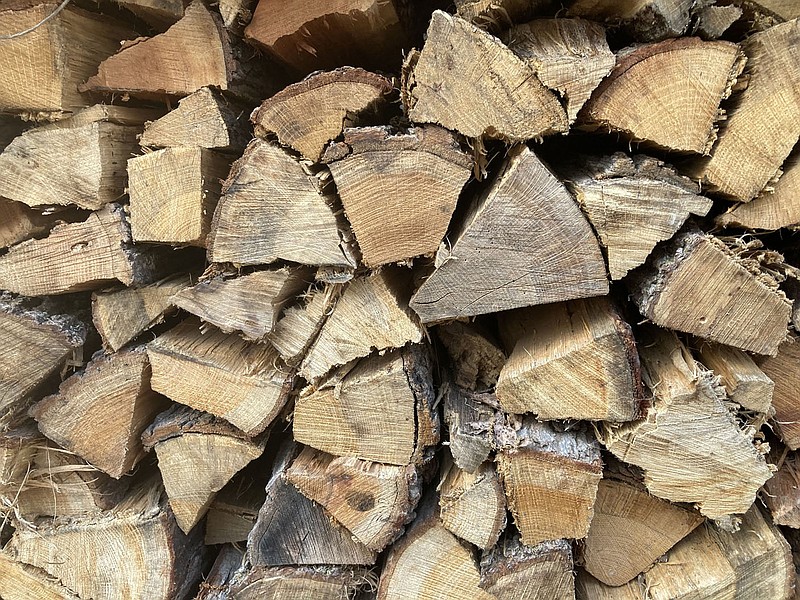 When February brings in some real winter weather, a blazing fire warms body and soul. The glow may be from a campfire, flaming logs in the fireplace or settling into a rocker next to a wood-burning stove.

A cold snap like this one shrinks a wood pile in a hurry. Long before winter comes, it's good to be the ant, not the grasshopper, and lay in a sizable stack of firewood. Letting that wood season, or dry, through the summer means there will be a chorus line of dancing flames for winter warmth.

I've been burning firewood most of my life. One thing I'm proud of is I've never bought a stick of firewood ever -- until last year.

March is wood-cutting month at Camp See No Deer. There's enough timber on the ground to last a couple of lifetimes. I've always enjoyed being in the woods in March, sawing up a rick or two of oak and hickory and splitting it by hand.

Last March, I spied a fine white oak tree that had toppled right beside a gravel lane at our little deer camp. The big tornado of October 2019 laid that oak down for easy firewood pickings. I could park close to the wood and toss the logs into the pickup bed. No need to wheelbarrow it a quarter mile.

After the last swing with the splitting maul, I sat on the truck's tailgate and admired my pile of wood, fragrant from being freshly split. It looked to be at least a pickup load. Hauling it home to the shack-ri-la could wait. That was enough work for one day. I'd come back later and fetch my firewood.

Well, later turned into a month. Morel mushrooms were already popping in April when I headed down the country lane to load my pile of wood.

Friends and neighbors, when I got there it was gone. Some knucklehead had stolen my firewood. Great. Now it was April and the crappie were biting. The last thing I wanted to do was cut more firewood.

I'd always admired the fine looking oak firewood the guys sold at Souls Harbor in Rogers. Souls Harbor NWA assists guys who may need a little help getting back on their feet. It's "a transitional community for men in recovery," their website says.

I'd drive by there on cold days, and the firewood crew would be hard at work with a couple of them splitting wood and others stacking it for sale. They always had a roaring campfire going and looked like they were having a great time. One chilly morning, I pulled in to buy firewood for the first time in my life.

What a great decision. For $60 I got so much firewood that it took a second trip to town to haul it all back to the shack-ri-la. Maybe I don't know what a rick is, but, if this was a rick of firewood, it was a generous one.

Not only that, the guys helped load my wood into the truck. Buying firewood from them supported Souls Harbor and helped me lay in firewood for this winter, and I'm burning plenty of it this week. It's been seasoning since April and bursts into flame using only a few sticks of kindling to get it going.

March is just around the corner. What's it going to be? Fire up the chain saw at Camp See No Deer or pay another visit to Souls Harbor and go fishing. Hmmm. Now that's a tough call.