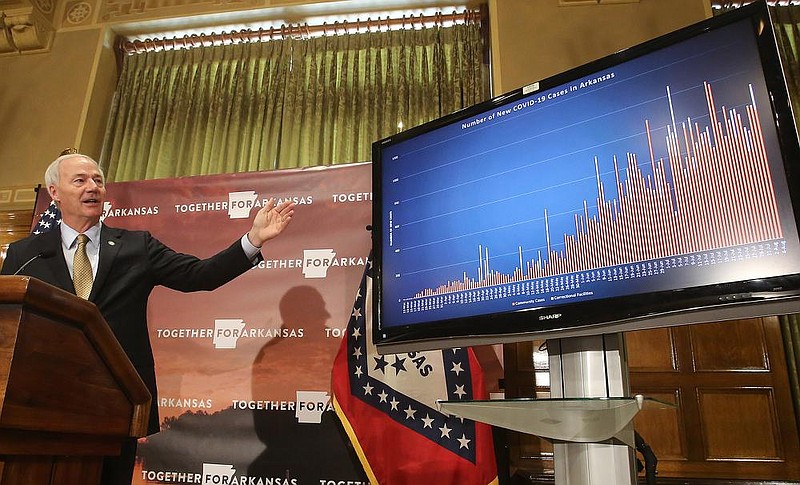 Arkansas Gov. Asa Hutchinson said Tuesday that the state next week will receive its biggest increase so far in its weekly allocation of coronavirus vaccine from the federal government.

Hutchinson also announced that the state Department of Health has revised its rules so that indoor events with up to 100 people can once again be held without submitting a plan to the Health Department for approval.

Previously organizers of events with more than 10 people were required to submit plans.

The announcements came as the state's count of coronavirus cases rose by just 177 amid a slowdown in testing caused by winter storms.

The number of people hospitalized in the state with covid-19 fell by four, to 638.

Those patients included 110 who were on ventilators, down from 111 a day earlier.

The state's death toll from the virus, as tracked by the Health Department, rose by 12, to 5,287.

Hutchinson said he learned of the increase in the amount of vaccine going to states next week during a conference call Tuesday with the White House covid-19 response team.

According to the U.S. Centers for Disease Control and Prevention, Arkansas will receive enough vaccine next week to provide initial doses to 58,150 people, up from 47,425 this week.

Those doses are in addition to booster shots the state receives each week for people who received their initial dose earlier.

Hutchinson said President Joe Biden's administration appeared to responding to feedback from him and other governors by allocating the increase in vaccine doses to the states rather than creating a federal program to disburse it.

"It’s not just my message, but it’s the message of the National Governors Association and the governors individually that we are doing a good job getting the vaccinations out, and that our encouragement is that all we need is a greater supply," Hutchinson, who is vice chairman of the association, said.

Arkansas reported 177 new cases of the virus on Tuesday but testing was greatly decreased because of winter weather that hit the entire state a day earlier, Hutchinson said.

But beyond the weather-related decreases, Arkansas' rolling average of daily new cases over the past two weeks has dropped by nearly 50%, according to researchers at Johns Hopkins University.

Planning smaller events such as weddings would be simpler now, the governor said.

"This is not opening up the Wild West," Hutchinson said. "It's not acting without department approval on major events."

Also Tuesday, the governor lifted a restriction that prohibited schools from holding sports competitions with more than two teams.

During the briefing, Hutchinson announced he extended the deployment of the Arkansas National Guard through Friday.

One-hundred Guardsmen are currently deployed across the state and 26 Humvees have been engaged, Hutchinson said.

In addition, two ambulance crews have been approved to assist emergency workers providing ambulance service, and will continue to assist throughout the week, the governor noted.

As of the governor’s briefing Tuesday afternoon, approximately 18-20,000 residents were without power across the state, Hutchinson said.

[Follow the latest on the rolling outages in Northwest Arkansas here » nwaonline.com/news/2021/feb/16/swepco-begins-rolling-blackouts/]

The most affected areas, he noted, were Montgomery, Garland, and Little River counties.

The total number of coronavirus cases reported in Arkansas was at 313,348 Tuesday morning, according to a state website. The death toll remained at 5,275.

[Video not showing up above? Click here to view » https://www.youtube.com/watch?v=CmsBCDhfbGo]

This story was originally published at 12:00 p.m.