Walleye new fish on the block 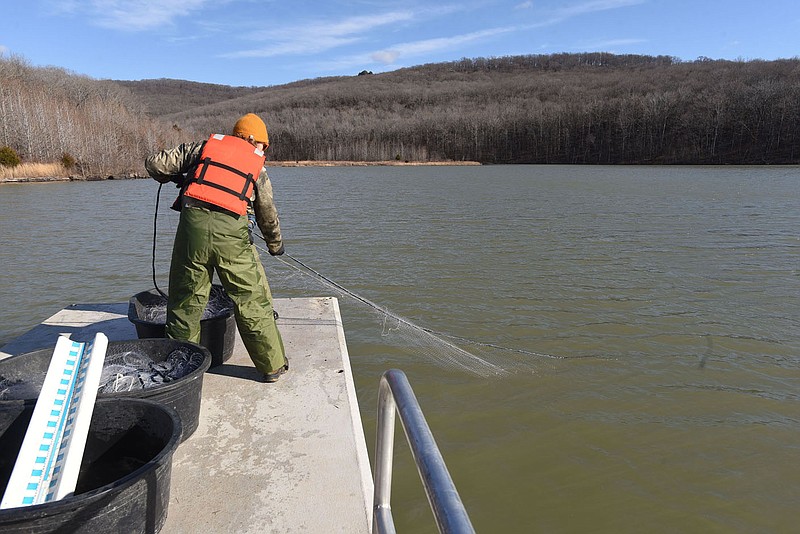 Aaron Freeman hauls in a net used to capture fish during an Arkansas Game and Fish Commission walleye survey at Lake Fort Smith. Walleye were the target species, but fisheries biologist also evaluated the health of white bass and other species at the reservoir. (NWA Democat-Gazette/Flip Putthoff)

Anglers are already reeling in walleye at Lake Fort Smith, but the catching may get better as more of these toothy fish prowl the scenic reservoir.

The Arkansas Game and Fish Commission started stocking walleye at Lake Fort Smith in 2013. Since then, the fisheries division has stocked anywhere from 3,000 to 15,000 fingerling walleye in the lake each year. The goal is to establish a population of walleye that reproduces naturally, said Jon Stein, Northwest Arkansas fisheries supervisor and a fisheries biologist with Game and Fish.

Anglers catch walleye at the lake now. Stein and his helpers have also collected walleye in gill nets they set in the lake to evaluate the population.

Walleye are the target species, but white bass, largemouth bass and other game fish turn up in the nets. Most of the fish survive and are released after they're weighed and measured.

Gill nets are mesh nets that are nearly invisible to fish. They swim into the net and get caught around the gill area. Stein headed out on the lake Jan. 14 to check 12 nets he'd set a day or two earlier to catch, measure and weigh some walleye.

[Don't see the gallery above? Click here to watch: https://nwamedia.photoshelter.com/gallery/Outdoors-2-16/G0000SJltr.vW0gM]

"What we're doing is seeing if the walleye are surviving well after we've stocked them," Stein said, steering his boat across the smooth water. "They're probably not reproducing on their own yet, but hopefully over time that'll happen."

Stein and two helpers collected a couple of 12-inch walleye along with an assortment of white bass, a flathead catfish, two big carp and a whopper largemouth bass that weighed 7.6 pounds. Stein plans to set more nets later this month and hopefully examine more walleye.

Nets are set along points and flats where game fish dwell 30 feet deep or less.

Game and Fish has stocked around 61,000 walleye fingerlings at Lake Fort Smith since 2013, Stein noted. Fingerlings average 1.5 inches long when they're put into the lake. They can't be kept in a tank or hatchery any longer than that because they start eating each other, Stein said.

It's hard to say how many of those stocked fingerlings grow into catchable-size adult walleye.

Stopping at the first gill net, Aaron Freeman and Kody Rudolph hauled in the mesh netting and tossed caught fish into a tub of lake water. Rudolph weighed and measured the walleye and other game fish. Stein recorded the data with pencil and paper.

Freeman and Rudolph work for the Fort Smith Utilities water department and help Stein with his fisheries work at the reservoir. Lake Fort Smith is a water supply for the city.

Both men are on the lake at least once a week taking water samples to monitor quality. Rudolph talks to lots of anglers and testified that walleye are a popular species.

"A lot of them use one-eighth-ounce jigs in different colors. They'll cast them out and work them along the bottom," Rudolph said. In the summer, nightcrawlers are a popular live bait for walleye.

Game and Fish waged an aggressive campaign years ago to get a sustainable walleye population established at Beaver Lake. The effort was a rousing success. Now walleye are one of the most sought-after fish at Beaver.

Walleye must be 18 inches or longer to keep at Beaver Lake. The daily limit is four. For now, the statewide daily limit of six walleye of any size applies at Lake Fort Smith.

Lots of anglers associate walleye with northern states like Iowa and Minnesota and rightly so. Farther south, walleye have the advantage of a longer growing season. They get big faster.

At Beaver Lake, Stein and crew do a walleye study every three years that's similar to his work at Lake Fort Smith. He'll do gill-net walleye research at Beaver in 2022.

The walleye fishing spotlight may shine as bright at Lake Fort Smith some day as it does at Beaver Lake.

"It'll be nice to have another place to go to catch walleye," Stein said. 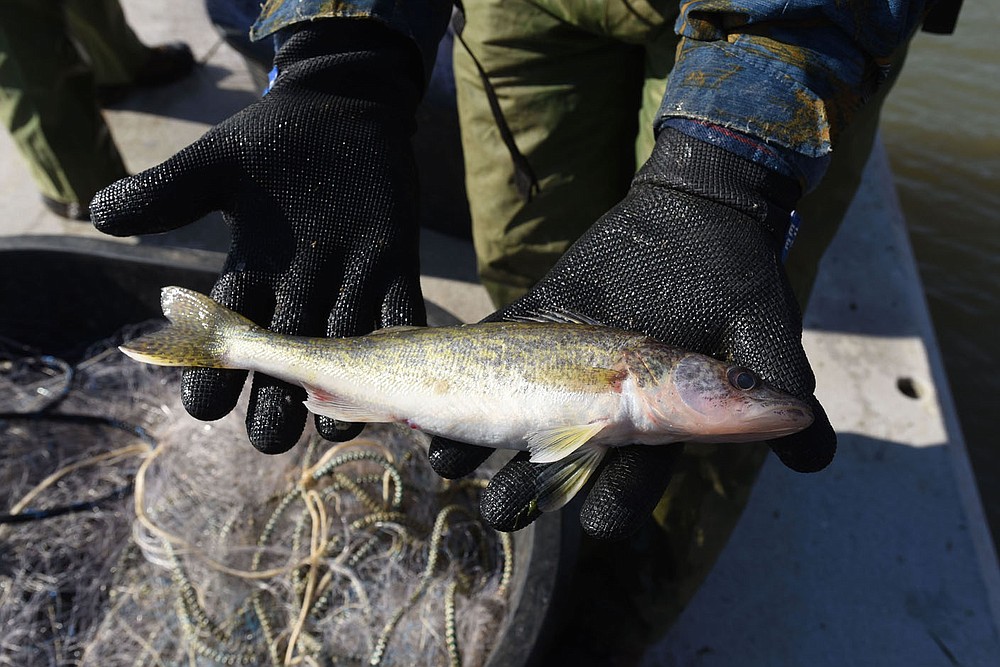 Game and Fish began stocking walleye at Lake Fort Smith in 2013. Research at the lake this winter helps fisheries biologist evaluate the walleye population and determine how well stocked walleye survive. This 12-inch walleye caught in a net for the study is between one and two years old, said Jon Stein, Game and Fish regional fisheries supervisor. (NWA Democat-Gazette/Flip Putthoff) 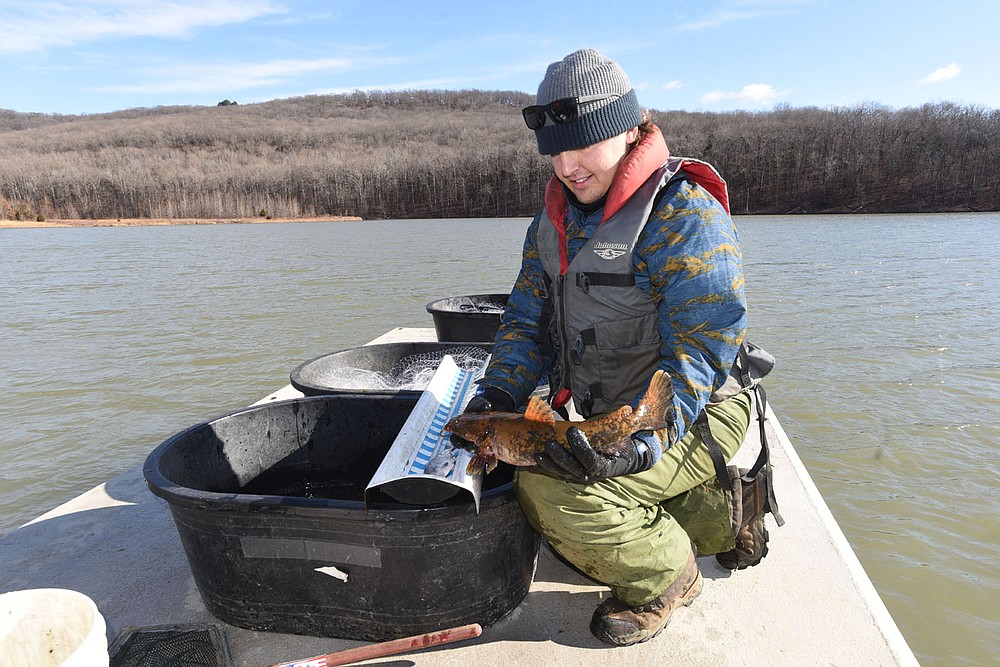 Kody Rudolph looks at a flathead catfish caught in a net during the walleye study. Rudolph is with the Fort Smith Utilities water department. He and co-worker Aaron Freeman helped with the Game and Fish study at Lake Fort Smith. (NWA Democrat-Gazette/Flip Putthoff) 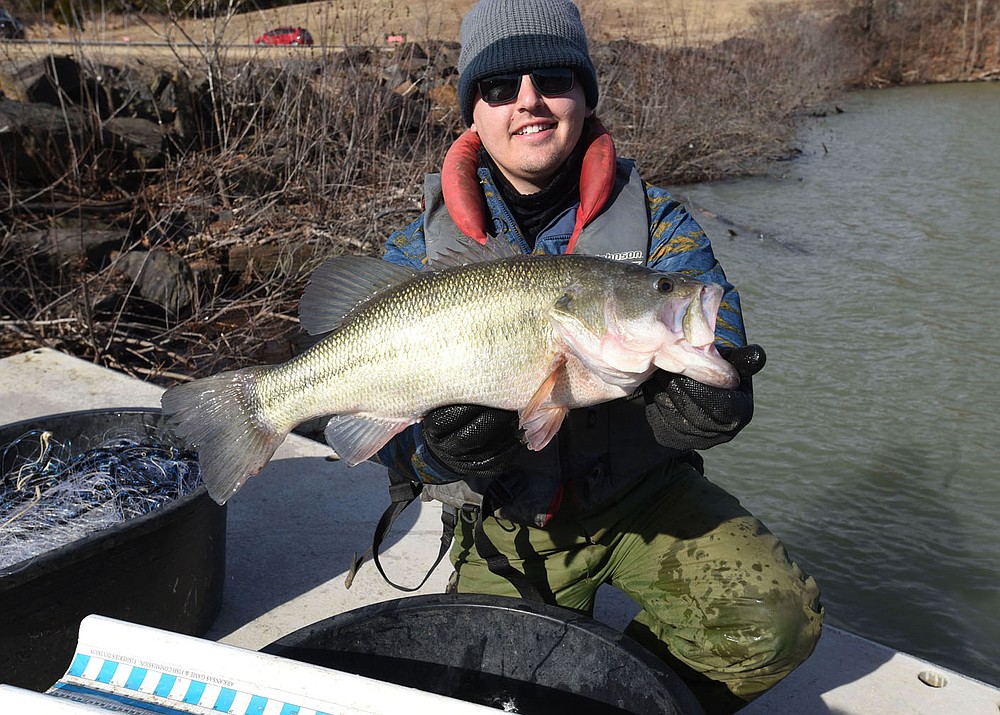 Lake Fort Smith is home to some lunker largemouth bass. Kody Rudolph shows a 7.6-pound largemouth that was caught in a net during the walleye study. Largemouth bass up to 10 pounds have been caught at the scenic lake. (NWA Democrat-Gazette/Flip Putthoff) 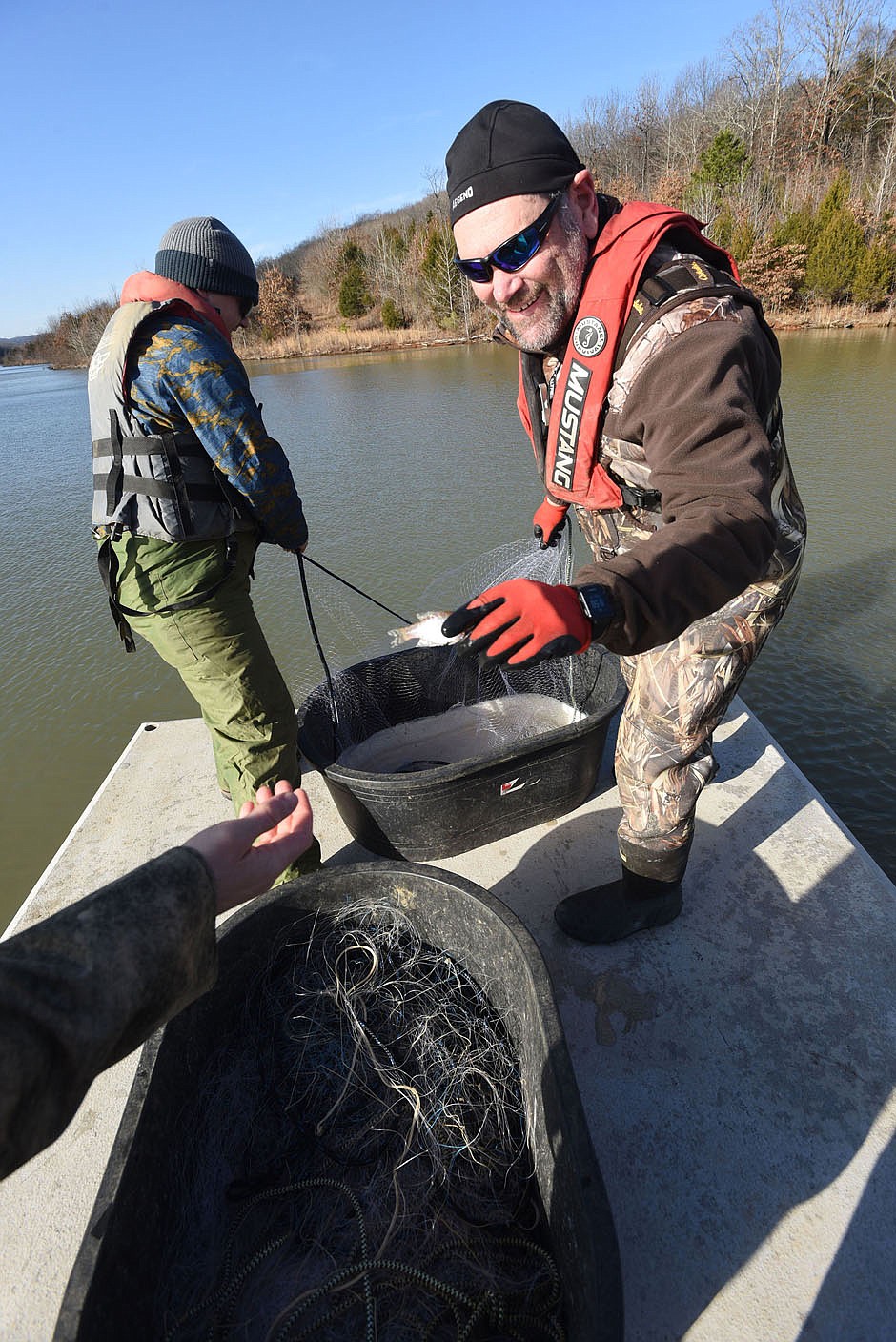 Jon Stein (right), Northwest Arkansas regional fisheries supervisor for Game and Fish, takes a small crappie from the gill net. Walleye are the focus of the study at Lake Fort Smith, but Stein also looked at crappie, white bass and other species during the research. (NWA Democat-Gazette/Flip Putthoff) 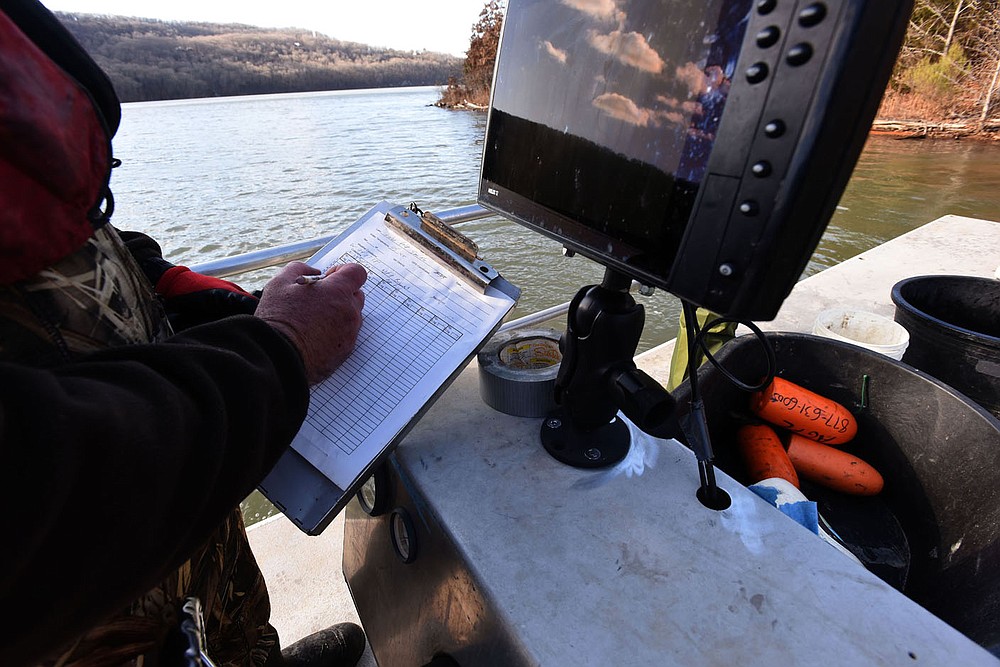 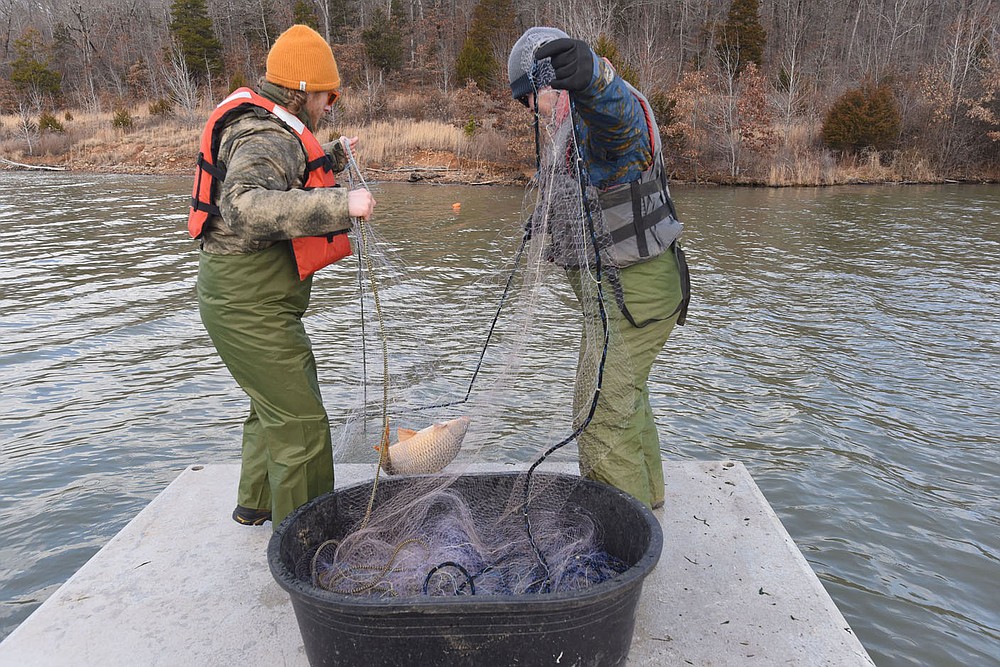 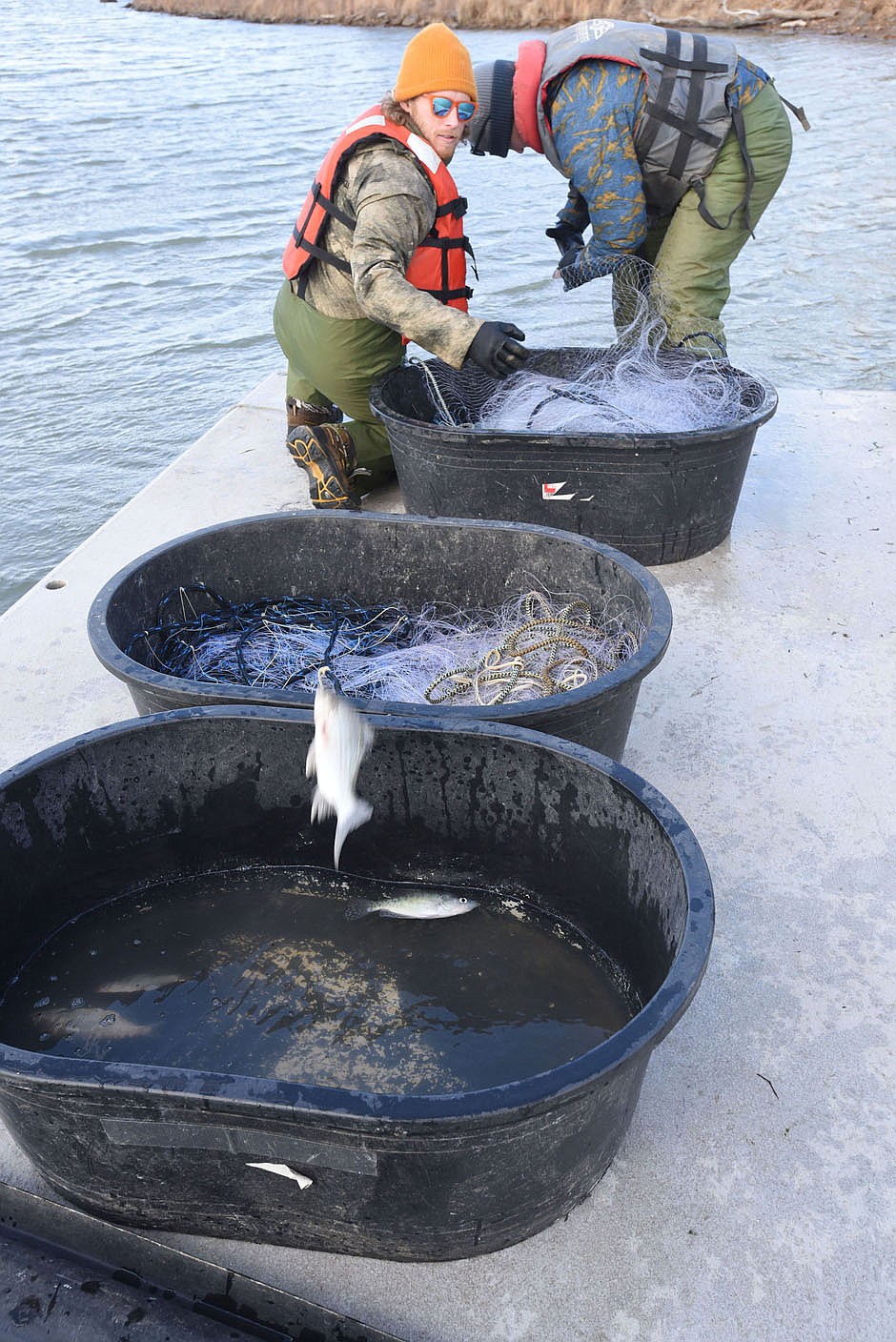 Lake Fort Smith is located north of Alma and south of Winslow two miles east of U.S. 71 in the Boston Mountains. The lake is 1,390 acres with a maximum depth of around 150 feet, said Kody Rudolph with the city of Fort Smith. The lake is a water supply for the city.