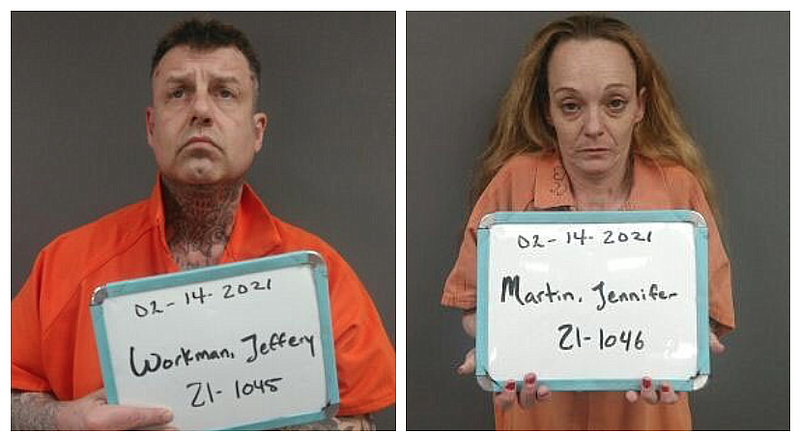 HACKETT -- Two people have been arrested in connection with a home invasion and fatal shooting that took place Sunday.

Jeffrey Allen Workman, 46, of Fort Smith was arrested late Sunday on suspicion of first-degree murder, first-degree battery, aggravated residential burglary, and possession of a firearm by certain persons, as well as on a parole violation, according to Capt. Philip Pevehouse, public information officer for the Sebastian County Sheriff's Office on Tuesday. Workman is being held without bond at the Sebastian County Jail, an online inmate roster shows.

Jennifer Martin, 39, of Fort Smith also was arrested on suspicion of conspiracy to commit first-degree battery, Pevehouse said. She is being held at the county jail on a $150,000 cash bond, according to the inmate roster.

Workman and Martin both are scheduled to appear in court Thursday.

Pevehouse identified the victim in the incident as Stephen D. Basham, 34, of Hackett.

"The gun which was used in the murder and the baseball bat used in the battery were recovered by SCSO at another location in Fort Smith," Pevehouse wrote in a news release. "Three search warrants were obtained and executed in the investigation. Multiple interviews were conducted."

The Sheriff's Office was notified of a home invasion and shots fired in the 300 block of Plum Street about 5:30 a.m. Sunday, Pevehouse said. Basham's body was found in his bed.

Witnesses in the home reported an unidentified "tall white male wearing a hoodie with the hood on his head" entered the home by kicking in the front door, according to Pevehouse. He hit a man inside the home with a baseball bat, police said.

The suspect then went upstairs to a bedroom and fired five to six shots at Basham, killing him, according to Pevehouse. The shooter left before deputies arrived.

A woman and three juveniles, ages 9 to 15, in the home weren't injured. The man hit with the bat required medical attention, according to Pevehouse.