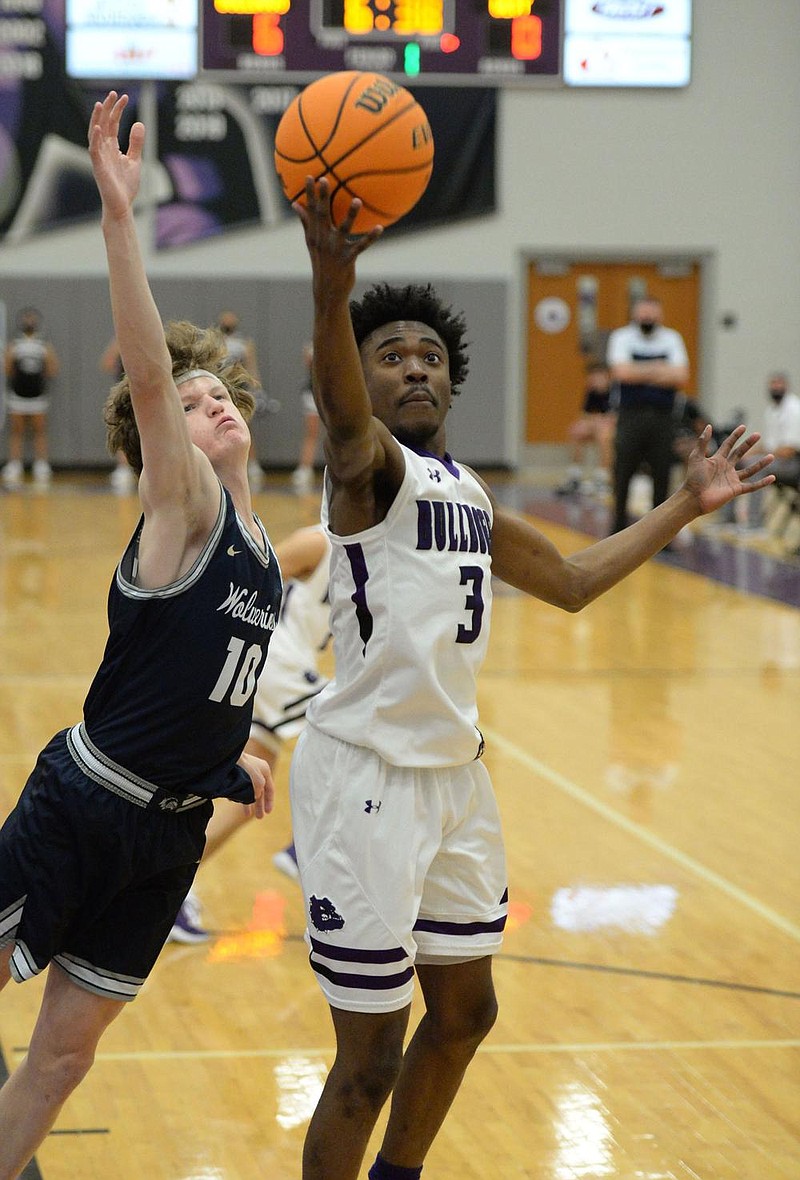 Fayetteville's Landon Glasper (3) pulls down a rebound Tuesday, Jan. 5, 2021, in front of Bentonville West's Cade Packnett (10) during the first half of play in Bulldog Arena in Fayetteville. Visit nwaonline.com/210106Daily/ for today's photo gallery. (NWA Democrat-Gazette/Andy Shupe)

Glasper scored 33 points as Fayetteville rallied from a 19-point deficit and beat Springdale 61-59 in overtime Friday at the Springdale gym. Glasper broke a 59-59 tie with two free throws with 0.8 seconds left after he was fouled on a rebound. The win enabled Fayetteville (18-5, 9-3) to remain in second place in the 6A-West Conference behind Bentonville, which beat the Bulldogs 60-58 on Tuesday despite 30 points from Glasper, a junior guard.

Glasper drove to the rim in attempt to tie that game with seconds left, but he was called for an offensive foul and Bentonville ran out the clock. For his effort, Glasper is the Northwest Arkansas Democrat-Gazette boys Player of the Week. Caroline Lyles of Fayetteville is the Northwest Arkansas Democrat-Gazette girls Player of the Week.

Fayetteville rallied from a 38-19 deficit in the third quarter to defeat Springdale for the second time in a close game. Glasper carried the offensive load for Fayetteville, especially in the second half when seniors CJ Williams and Matt Wayman fouled out. Glasper tied the game 55-55 with a deep 3-pointer late in regulation then decided the outcome in overtime with two clutch free throws with 0.8 seconds left.

“Coach told me ‘when the game is on the line, get to the rim and don’t settle for a jump shot’ and that’s what I did,” said Glasper, who made all eight of his free throws against Springdale.

Lyles led a comeback on Tuesday when Fayetteville beat Bentonville 45-41 to a tie for first place with the Lady Tigers in the 6A-West Conference.

Bentonville appeared in control in the second quarter after Maryam Dauda hit a short jumper to put the Lady Tigers ahead 21-14. But Fayetteville stormed back and took a 24-23 lead behind Lyles, who scored 11 of her 17 points in the first half.

The Lady Bulldogs (13-6, 9-1) continued to outplay Bentonville in the second half with Lyles and Claudia Bridges doing most of the scoring. Lyles converted a three-point play after a rebound basket to put Fayetteville ahead 32-24 late in the third quarter. She was also the primary defender against Dauda, who was held to nine points after pouring in 35 points in a win over Fayetteville earlier this season.

The victory marked another highlight for Lyles, who wears a knee brace after being injured well before the season started.

“It’s been an incredible return for Caroline,” Fayetteville coach Vic Rimmer said. “Following her late summer knee injury, she has worked so hard to get back to a high level of play. Caroline’s ability to score from the 3-point line and also around the hoop makes her a unique talent.”

Lyles scored 16 points while playing sparingly in a 74-27 win at Springdale on Friday. Lyles made 3-pointers in the second and third quarters for Fayetteville, which made 13 3-pointers on the night. 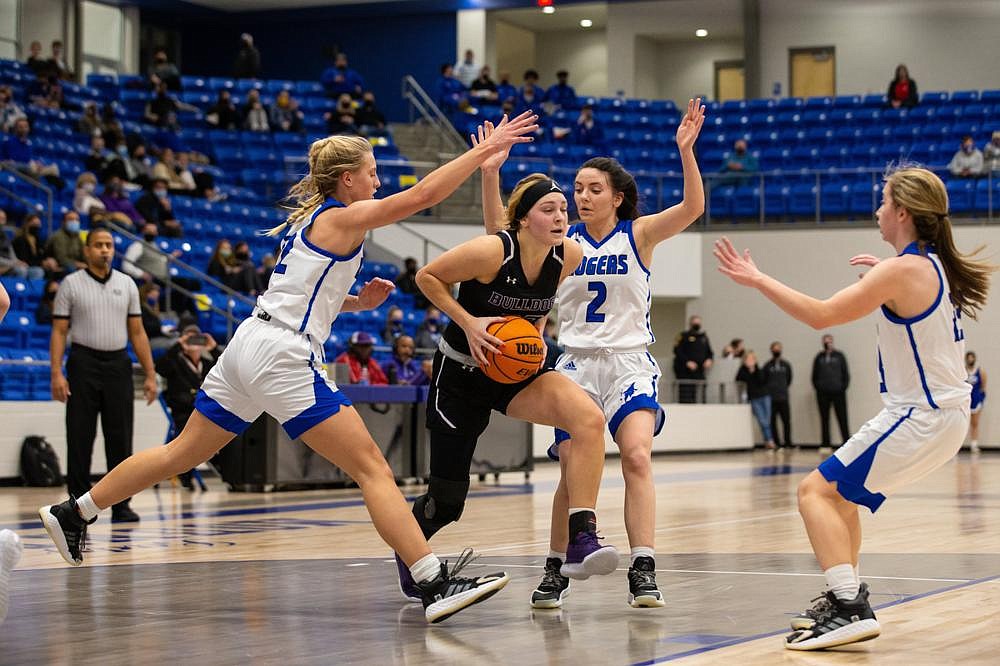 Caroline Lyles (center) of Fayetteville drives past Kate Miller (left) and Aubrey Treadwell of Rogers on Friday at King Arena in Rogers. Lyles led the Lady Bulldogs to a 63-53 victory for their second consecutive 6A-West win. (Special to NWA Democrat-Gazette/David Beach)