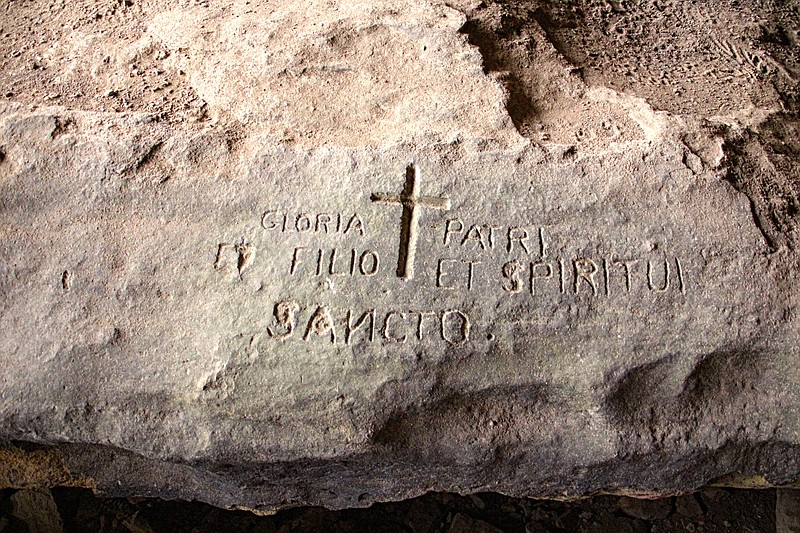 The origin of this Latin inscription, carved into stone in a shelter on Home Valley Bluff, is one of the mysteries of the Ozark National Forest. (Special to the Democrat-Gazette/Bob Robinson)

When I read that the Ozark Society Highlands chapter was planning to lead a hike into Home Valley Bluff on Feb. 6, I marked the event on my calendar. I had hiked the area several years ago and remembered an abundance of scenic bluffs, waterfalls and pedestal rock formations.

Something else in the hike description piqued my interest: a Latin inscription. The group was to visit an area with an inscription carved into rock.

I had not heard about the inscription or the Ozark folklore surrounding its origin. Some tales claim a prayer was etched into stone by Hernando de Soto back in 1541. Others believe the inscription was created by early European farmers in the 1820s. Another popular tale attributes the inscription to a battle-weary soldier during the Civil War.

This added an element of mystery to the adventure.

SWITCH TO PLAN B

"Home Valley Bluff hike has been canceled due to weather concerns."

I was en route to the area when I read the email. I was planning to spend the night of Feb. 5 in the Buffalo River area to shorten the drive to the meetup location the next morning. Pulling up the weather app on my phone, I saw the forecast included a combination of rain, sleet and snow, along with sub-freezing temperatures. Canceling the group hike was the responsible thing to do.

However, I seldom change my plans based on a ''weather forecast.'' Plus, the wet stuff was not scheduled to arrive until early afternoon Feb. 6. I believed that with a small group, people I was sure could maintain a healthy pace, we could be back in our vehicles and headed home before the weather became a concern.

Swapping a few emails that evening, our little group agreed. The next morning, using directions listed in Tim Ernst's "Arkansas Nature Lover's Guidebook," the six of us met at a driveway 1.2 miles east of the community of Nail on Arkansas 16.

Armed with only limited directions from a hiking friend, Terry Fredrick of Fayetteville, I explained to everyone our chances of finding the inscription were pretty slim. However, all agreed it would be an enjoyable bushwhack even if we did not find it.

The driveway led us down a mountainside to the lip of a sheer rock ledge. This ledge offered a panoramic view across the wide-open vastness of Limestone Valley to another sheer wall of rock that rimmed the canyon known as Home Valley Bluff.

Ernst declared these bluff lines to be some of the most incredible in the Ozarks. Coming from a person who had pretty much visited them all, this was high praise.

After drinking in our fill of this beautiful natural scene, using Fredrick's directions, we followed the bluff eastward until we found a passable route down to the first bench below. From that point, we were to bushwhack along the bluff line until we reached an open bluff shelter.

Our exploration had officially begun.

Immediately we discovered a large cavity in the 30-foot rock wall with a steady curtain of water dripping across the opening. Stepping through the falling water — several drops landed between the gap of my collar and chilled my neck — we explored the shelter.

At the back of the shelter we saw that, over eons, streaming water had cut into the rock, separating a once-solid mountainside into two separate formations.

After we emerged from the cavity, continuing to follow the bluff line required a great deal of scrambling over piles of massive boulders. There were also dense briar patches, which tripped everyone up, clinging to our feet. But the payback was worth it. We experienced firsthand naturally carved bluff shelters and crevices that had not been visible when I hiked along the top of the bluff on my earlier outing.

We were also dazzled by waterfalls pouring off bluffs some 50 feet above. Our effort to follow the bluff line routed us behind several of these falls.

Just past Tea Table Falls, the bench we were following grew narrower and narrower; erosion over time had chipped away at the bench until eventually nothing remained to support us. At that point, we had no other alternative than to backtrack and drop down to the next bench some 20 feet below to resume our quest.

We paused to explore the walls of each open bluff shelter we passed in search of the historical writings. On a couple of occasions, we had to scramble up steep bluffs of 10 or more feet to reach shelters on an upper bench level.

One such shelter that Jack Mabry and I scrambled up to proved to be a massive opening, some 80 feet across and 20 feet tall. A steady flow of water poured from a crack at the back of the cave to weave a path across the shelter floor. Lush green algae and fungi flourished along the drainage banks, so bright it glowed in the shadowy darkness of the cavern. 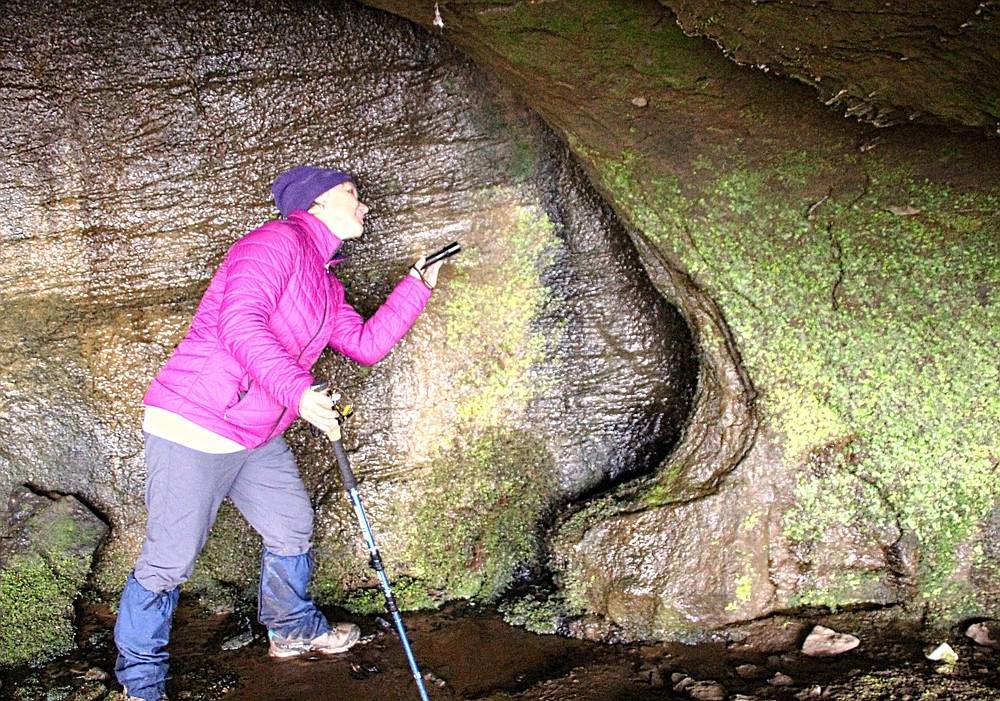 Dalene Ketcher looks for the source of water sheeting down the back of a cavern during a hike Feb. 6, 2021, along Home Valley Bluff -- a 3-mile, rugged limestone wall that rises in three tiers as it wraps around a mountainous ridge overlooking the drainage of Big Piney Creek in the Ozark National Forest. (Special to the Democrat-Gazette/Bob Robinson)

ABOUT TO GIVE UP

After hiking more than 2 miles along the bluff line, we concluded we must have missed the inscription. But we decided further investigation would have to wait for another day because we also wanted to hike along the top of the bluff.

I had anticipated following others on this hike and so had not researched the route to the inscription on my own. A lesson learned for future outings.

Once we had backtracked to the top of the bluff, we continued our exploration along the rim of the canyon, enjoying expansive views into the open valley below.

We passed the distinctive rock pedestals known as Tea Table Rocks, two stacked rock formations some 8 feet tall, noble sentinels watching over the canyon below. There was also a unique water cascade that fed into a cut slot that made a sharp right turn before free-falling over the bluff edge.

It was a great hike with more than enough beautiful scenery and natural rock formations to make the strenuous scramble over boulders and through briar patches worthwhile. We returned to our vehicles just when the first light flakes of snow began collecting on our shoulders. We celebrated the adventure with an adult beverage.

"Are you up for going back in tomorrow?" Fredrick asked when I phoned him to report I was unable to find the inscription.

"For sure," I eagerly replied.

It had been a very enjoyable outing, and until Fredrick offered to venture back down the bluff, I had not realized how much I regretted not finding the inscription.

The snow was already accumulating by the time I had reached cell coverage to call him, with a couple of inches stacked alongside the highway. I told him I would find a place in the area to hunker down for the night and report road conditions the next morning.

I awoke in a fairy-tale winter wonderland, with a thick layer of pure white fluffy snow blanketing all surfaces. Cautiously, I ventured out to check highway conditions, elated to find them clear and dry.

The hike was a go.

Fredrick and I and one of the hikers from the previous day, Dalene Ketcher, started our trek down the mountain in awe over the surrounding snow-blanketed forest. What a difference a day makes.

We took the identical route as the first day, following the first bench, hiking along the bluff and then behind the waterfall. Emerging from the falls, we continued until the ledge vanished once again.

He had always approached the inscription from the opposite direction. Knowing it was on the first bench, he assumed it could be reached by following the same bench from the east.

We backtracked and then dropped down to follow the bluff by way of the second bench. Upon reaching the same shelter that Mabry and I had explored, we crawled up the vertical, 10-foot bluff.

Reaching the floor of the wide cavern, Fredrick circled a pile of large boulders clustered just beyond the far corner of the opening. Then he stopped and pointed a finger at the backside of one of the large stones.

There it was: "Gloria Patri Et Filio Et Spiritui Sancto."

For those who are not up on their Latin, that is "Glory be to the Father, to the Son and to the Holy Spirit."

I had found it, albeit Ringo Starr style, "with a little help from my friends." Nonetheless, there it was.

The carving was much more detailed than I had anticipated. Someone worked long, painstaking hours, scraping the rock surface smooth and then delicately cutting letters deep into the hard surface.

As Fredrick and Ketcher ventured off to investigate the water trickling from the cavern wall and the lush vegetation populating its edges, I remained at the engravings.

Why here? Why this particular rock? Why not on the walls of the shelter, like most historic messages?

Deep in thought, I stood there, looking. As my eyes rose from the etching to peer through the wide opening into the valley below, a thought struck me.

"That is why he chose this rock. To keep watch."

As I slowly considered the various folklore I had read on the origin of the inscription, one by one I began eliminating who I thought were unlikely authors.

De Soto was on a quest for gold and silver. I do not believe he would have allowed his soldiers to spend so much time carving an inscription. Labor would be better spent digging for precious metals.

As for the early pioneers, I can attest that this is not a location they would have accidentally stumbled across while scouting a new homestead.

However, a Civil War soldier? He would have an interest in watching the valley. Facing the opening, the boulder would offer a perfect vantage point, even during the long hours he labored on the inscription. There was even a water source at the back of the cave for drinking. The cavern was also deep enough to offer protection from the rain.

Yes, I can see a battle-weary soldier finding the shelter of the cavern a welcome home -- in shock from all the horrendous scenes he had witnessed during battle, turning to prayer for an answer, etching his prayer in stone.

After returning home, I learned a fact that supported this theory. In 1864, a Union detachment attacked a company of Confederates in the very valley below the bluff shelter.

The inscription is the beginning of a prayer of praise. The rest of the prayer says, "as it was in the beginning, is now, and ever shall be, world without end. Amen."