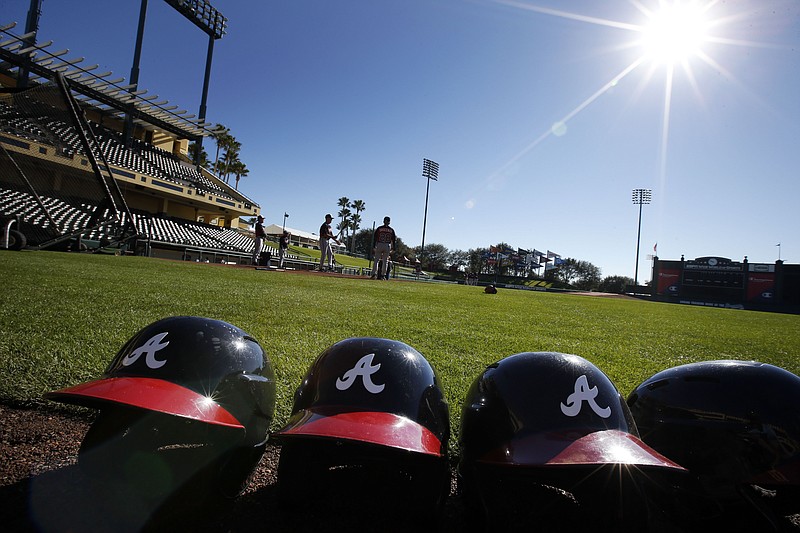 FILE - In this Feb. 18, 2014, file photo, Atlanta Braves batting helmets sits on the field under a shining sun during a spring training baseball workout in Kissimmee, Fla. Major League Baseball revamped its spring training exhibition schedule because of the pandemic, cutting travel for Florida-based teams in an effort to avoid the novel coronavirus, the league announced Friday, Feb. 12, 2021. (AP Photo/Alex Brandon, File)

Stadiums were emptied, schedules rewritten. Some players opted out. The ones who didn't spat into covid-19 testing cups until their mouths went dry.

"When it was all said and done, you kind of look back and go, 'God, that was the longest 60 games I've ever been a part of,' " veteran pitcher Jon Lester said last month.

Against the backdrop of the ongoing coronavirus pandemic, pitchers and catchers are reporting to spring training this week, the first step in a 2021 season that will take many of the complexities from 2020's 60-game sprint and stretch them over an additional four months.

Sure, there's the usual buzz over players with new homes. Blake Snell and Yu Darvish, hoping to push the upstart San Diego Padres over the top. Still in their way, the World Series champion Los Angeles Dodgers, who upgraded with NL Cy Young Award winner Trevor Bauer. Francisco Lindor is a Met, Nolan Arenado a Cardinal, and George Springer and Marcus Semien have joined up on the Blue Jays.

This season, though, promises to again be defined by the pandemic.

Offers by MLB to delay opening day were rejected by the players' association, defaulting the league into an on-time start.

Baseball will again use seven-inning doubleheaders and runners on second base to start extra innings -- experiments introduced during last year's condensed regular season to ease the burden on pitchers amid a flood of postponements prompted by positive tests and contact tracing.

Sunflower seeds are still outlawed, and high-fives frowned upon, too. Although limited-capacity crowds are expected at many stadiums, autographs will remain a no-no.

Other 2020 changes have been put on the bench. The universal designated hitter is gone, and no deal has been reached to re-expand the postseason. Of course, last year's agreement to fatten the playoff field from 10 to 16 teams wasn't finished until hours before the first pitch on opening day, so there's precedent for a late change.

Scheduling figures to remain a headache. There were 45 games postponed for coronavirus-related reasons last year, and all but two were made up.

Players will again be tested 3-4 times per week for covid-19 and heavily restricted in what they can do during their time off. Lester, signed by Washington as a free agent in January after six seasons with the Chicago Cubs, compared the exhaustion of last year's protocols to a deep playoff run.

"Mentally, you don't realize how draining it is until you're done," he said. "I think last year was that. It was two months of that mental grind of the testing, worrying about the testing, making sure you're doing all the right things."

And now it's time to start all over, beginning soon in Clearwater, Tempe and all the familiar camp sites.

Spring rosters will be limited to 75 players, with minor-league camps delayed until the big-leaguers leave town for opening day April 1. For fans accustomed to exploring the backfields, there won't be much to see.

Still, MLB has adopted extra spring precautions. The Grapefruit League schedule was reworked to limit travel, and clubs won't play exhibitions against local colleges -- usually a spring staple. Some early games may be shortened to five or seven innings, and half-innings can be called off before three outs if a pitcher has thrown at least 20 pitches.

MLB has claimed billions in losses after playing the 2020 season almost entirely without fans, and free agents were met by a sluggish market this winter.

Several notable players remain available. Right-handed starter Jake Odorizzi, an All-Star in 2019, is still without a deal after various ailments ruined his 2020. Gold Glove center fielder Jackie Bradley Jr. hasn't found a home, either. Trevor Rosenthal, Taijuan Walker and others could help a contender, too.

Championship managers Alex Cora and AJ Hinch are back after serving one-year bans stemming from the 2017 Houston Astros cheating scandal. Cora -- fired by Boston shortly before last year's camp opened -- was rehired by the Red Sox, where he won a title in 2018. Hinch, fired as Houston's manager after his suspension, was hired to replace Ron Gardenhire in Detroit.

The only other new manager is a throwback -- Tony La Russa, now in charge of the Chicago White Sox. Already a Hall of Famer, La Russa hasn't managed since 2011, and his hiring was met by skepticism about his potential handling of modern players.

La Russa in particular is coming back to a different game. And while many recent changes haven't been wholly popular with fans, the consensus is that all these adaptations are baseball's best chance at normalcy.

"I actually liked both the seven-inning doubleheaders and the runner on second," Oakland Manager Bob Melvin wrote in a text to the AP. "I was skeptical at first, but they both were successful in my opinion." 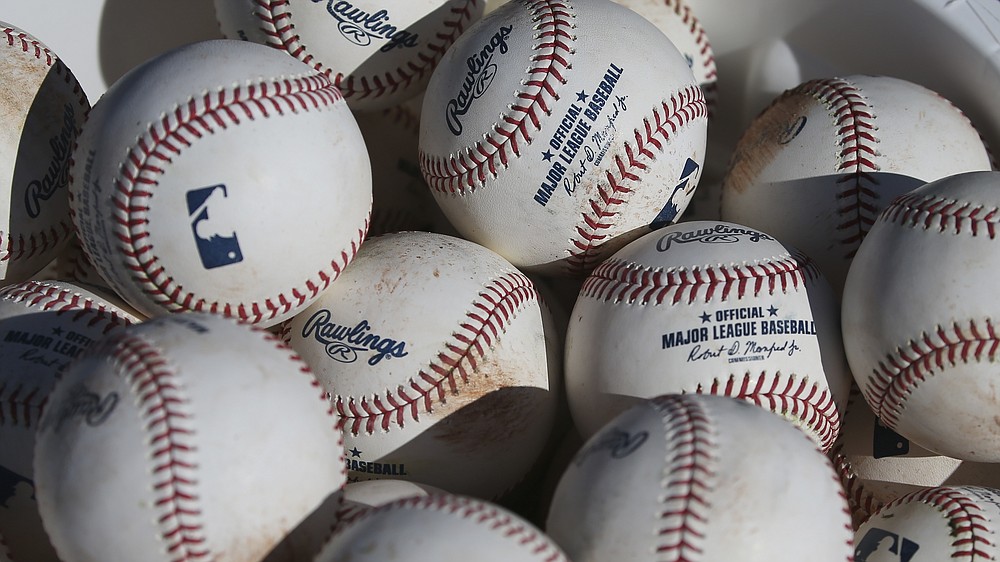 FILE - In this Feb. 14, 2020, file photo, baseballs sit in a bucket after they were used for fielding practice during spring training baseball workouts for pitchers and catchers at Cleveland Indians camp in Avondale, Ariz. Major League Baseball revamped its spring training exhibition schedule because of the pandemic, cutting travel for Florida-based teams in an effort to avoid the novel coronavirus, the league announced Friday, Feb. 12, 2021. (AP Photo/Ross D. Franklin, File) 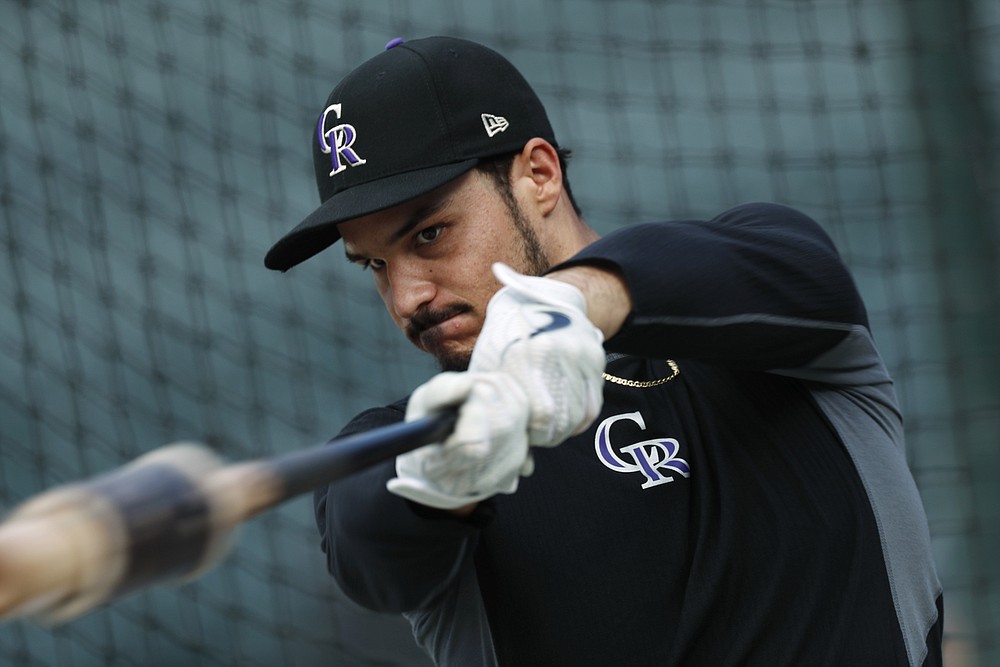 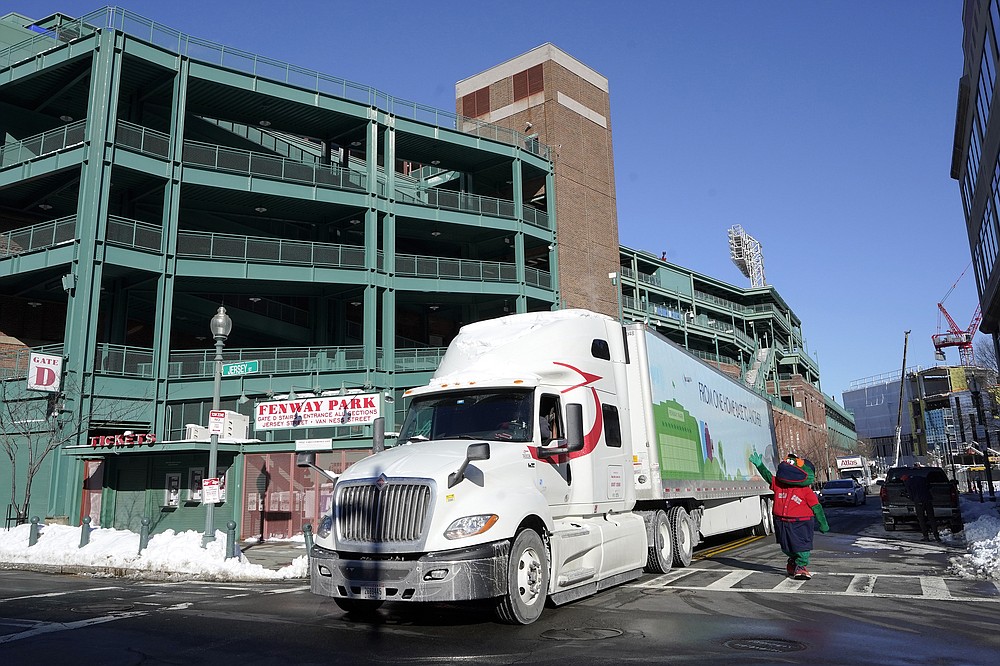 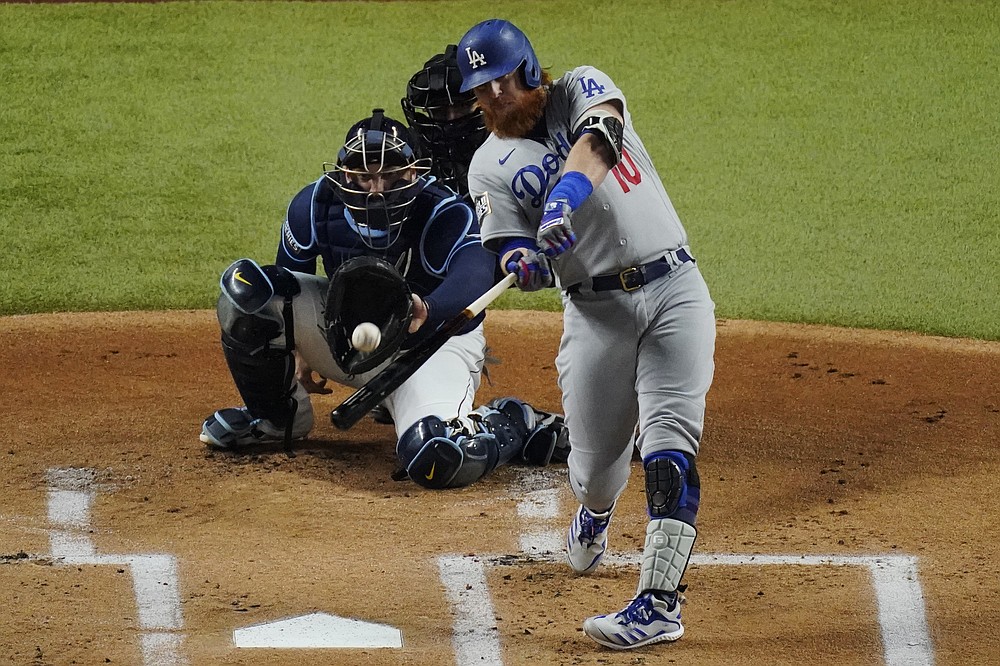 FILE - In this Oct. 24, 2020, file photo, Los Angeles Dodgers' Justin Turner hits a home run against the Tampa Bay Rays during the first inning in Game 4 of the baseball World Series in Arlington, Texas. Turner is returning to the Dodgers, announcing via Twitter that he’s ready to “run it back” with the World Series champions. (AP Photo/Sue Ogrocki, File)
ADVERTISEMENT