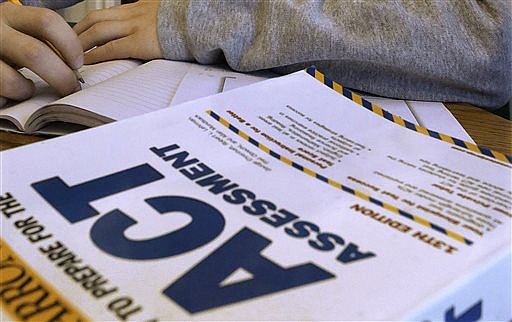 The state is requiring school districts to give ACT Aspire tests to students in grades three through 10 this spring -- at the end of a school year in which a global pandemic kept thousands of students at home.

The ACT Aspire tests in math, literacy and science, along with different tests for kindergarten-through-second graders, for students with the most significant cognitive disabilities and for students who are not English-language speakers, are all to be taken by students on-site, state officials have directed the school systems.

That includes the approximately 97,000 students -- 21% of the state's more than 470,000 public school students -- who have been doing work online from their homes this year.

On-site testing is intended to reduce the risk of students looking up answers or parents aiding their children.

The Arkansas Division of Elementary and Secondary Education has compiled and made available an "assessment tool kit" to help school systems encourage families who have stayed away from campuses to participate in on-site testing.

"It's important that we measure student learning," Kimberly Mundell, a spokeswoman for the state agency said last week. "We weren't able to test last spring, so it's even more important that we test this school year."

Even if the U.S. Department of Education should permit states to ask for waivers of testing requirements for this year -- and so far it hasn't -- Arkansas has no plans to ask for one, Mundell also said.

Mundell said the state is offering the districts some flexibility in the testing program.

In the spring of 2020, all 50 states requested and received waivers of the testing requirements from the federal government. The coronavirus pandemic at the time was in its early stages. Arkansas and much of the nation in March had to turn on a dime to close schools to on-site teaching in hopes of slowing the spread of the contagious and potentially fatal virus.

Arkansas schools reopened in late August and, in contrast to schools in some other states and districts, have remained open unless an outbreak and quarantines caused a temporary short-term shift to remote instruction.

While 21% of students statewide have opted for remote instruction, that percentage varies from district to district.

The issue of whether the tests should be given this year is a national one. Education Week, a national newspaper on elementary and secondary education, reported last week that while Arkansas and Texas are among states planning to give exams, other states such as New York and Michigan have said they are seeking waivers so they can cancel the tests.

The Arkansas assessment tool kit notes that without the normally required testing in 2020, critical information about student learning in the 2019-20 school year is not available.

Testing this spring will enable parents and educators to determine if a student is learning what is needed for success in college and careers, the tool kit states. The test results will indicate what the impact of the pandemic has been on academic achievement.

While on-site testing is required to ensure a consistent measure of students, the tool kit also says that students' and staff members' safety are the highest priority, and that state Department safety protocols will be followed. That includes the wearing of masks, social-distancing and disinfecting of spaces and materials.

The Division of Elementary and Secondary Education has extended the window of time for doing the testing and has suggested other strategies to allow for smaller groups to test at a time.

The period for giving the ACT Aspire tests this spring is April 5 through May 21.

Testing on Saturdays, after school hours and at alternative sites -- such as community centers -- and separate times and sites for on-site and remote learners are among the flexible options that the state agency is suggesting.

Provisions in the tool kit emphasize that while the end-of-year tests are traditionally a state and federal government strategy to hold schools and districts accountable for student learning, the focus this year will not be so much on schoolwide accountability but on students. The test is a means to "to take a snapshot of learning to identify and track progress and inform interventions."

The state agency, with the support of Gov. Asa Hutchinson, asked lawmakers this year to waive or pause the application of A-to-F letter grades to schools based on the results from the Aspire tests. That legislation has been signed into law. This will be the second year without letter grades. They were not applied to schools for the 2019-20 year when the tests were not given.

There is no process for families to ask that remote-learning students be excused from the on-site testing, the tool kit states.

Instead, parents who have concerns about high-risk health issues are urged by the state to contact their student's school to explore options for the testing.

The tool kit includes a customized flyer that districts can distribute to families to explain safety measures and flexibility around the testing.

The tool kit also suggests a timeline and different strategies -- including emails and phone calls --for communicating information about the testing.