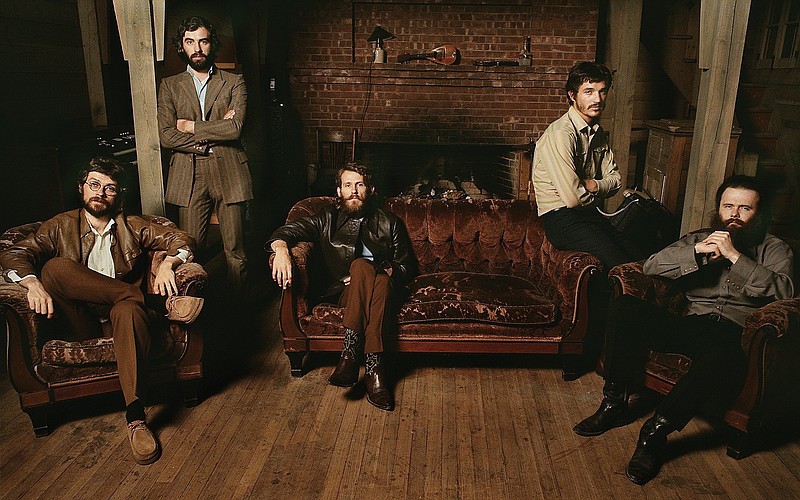 The Band (Special to the Democrat-Gazette/Norman Seeff)

"Stage Fright," the third album released by The Band, came out in August 1970, which means it has been around for 50 years and is subject to being revisited and reconsidered by people who were very young when it first came out.

On Friday, Capitol/UMe released the obligatory 50th anniversary edition, a handsome set that includes two CDs, a Blu-ray disc of a live performance, an LP and a seven-inch vinyl record. Among the new tracks uncovered for the set are seven songs recorded by Robbie Robertson, Rick Danko and Richard Manuel during a loose jam session in a hotel room in 1970; and alternate versions of the tracks "Strawberry Wine" and "Sleeping."

The package has been remixed by Robertson and producer Bob Clearmountain from the original multi-track masters, which will be of some interest to fans versed in the history of the album.

Reportedly, Todd Rundgren, who worked as an engineer on the record, and British producer Glyn Johns were both asked to prepare mixes of the album. Accounts vary on whose mixes were used on the original album — the consensus seems to be that seven songs on the 1970 release were prepared by Rundgren and three were Johns' tracks, but it has also been claimed that all the Johns mixes were used and the 2000 reissue apparently used only Rundgren's mixes.

It's probable that no one quite knows. In his notes accompanying the set, Robertson diplomatically writes, "Johns and Todd [Rundgren] did a terrific job on the original

mixes in England while The Band was on the Festival Express train tour across Canada with Janis Joplin and the Grateful Dead. We had always been part of the mixing process before, which left something on this album feeling a little unfinished. Clearmountain has taken this music and given it the sonic lift it deserves."

Robertson also says that, for the first time, the album is being presented in the originally planned song order.

It carries a list price of $149.98, which is in line with similar projects. A photo book is included, which didn't arrive in time for this review. (We're working off digital tracks, not the finished boxed set here.)

I've always liked "Stage Fright," though I'm not sure it's anyone's favorite record by The Band, excepting perhaps the late British critic John Bauldie, who offered the opinion that "The W.S. Walcott Medicine Show," the lead track on the newly configured album (it was the second track on side two on the original release) is "The Band's greatest Americana song." Most fans probably favor 1968's "Music From Big Pink," or maybe 1969's "The Band."

Both those albums contain more familiar songs than "Stage Fright" does, and the general consensus is that "SF" is where the strain first began to show on the group, and its records became less of a collaborative effort as Robbie Robertson stepped forward as their chief songwriter. (Robertson has composer credits on all 10 tracks that comprise the original album; he's credited as sole songwriter on seven.)

When it was released, most critics thought it a credible if somewhat disappointing follow-up; in his classic 1975 book "Mystery Train," Greil Marcus detected that "[a] certain vibrancy was missing; the music was too worked out, too careful."

Maybe so, though apparently "Stage Fright" was meant to be a looser and less serious record than the first two — Robertson conceived it as a "good-time" record recorded live in front of an audience at the Woodstock Playhouse in their base of operations in upstate New York. But the city fathers, fearing more Woodstock Festival-type anarchy, opposed the idea, which led to the group simply employing the off-season theater as a makeshift studio.

And the lyrics for the largely upbeat-sounding tunes took a decidedly dark turn as Robertson said he found himself "writing songs he had to write" — full of anxiety and nervous tension such as the title track and "The Shape I'm In," both sung by Richard Manuel and about him. 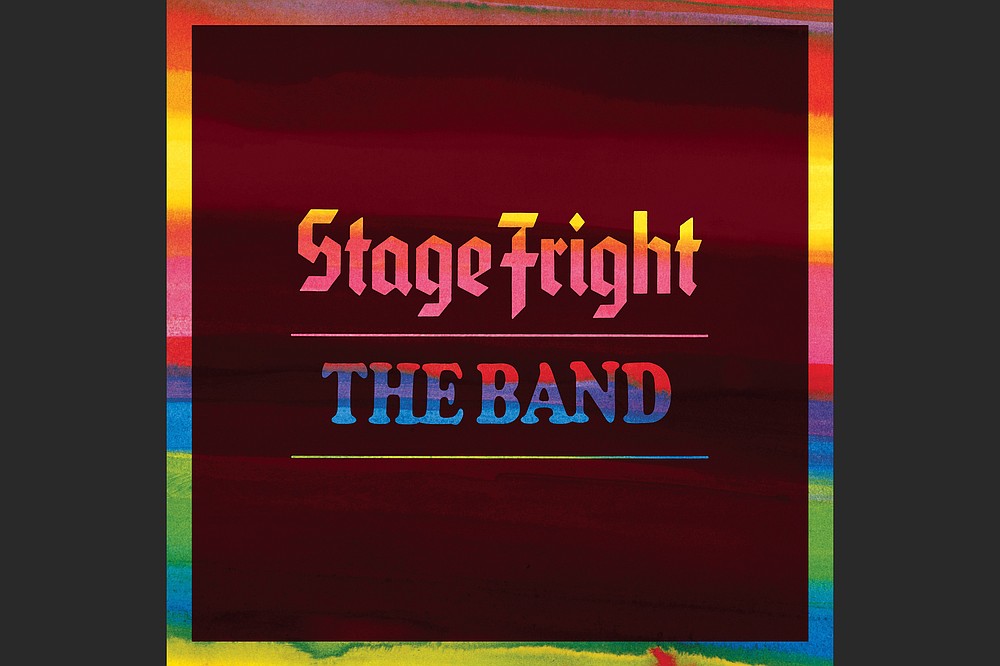 Much of what is written about The Band focuses on the relationship/rivalry between guitarist-songwriter Robertson and drummer/multi-instrumentalist/lead singer and putative heart and soul of the outfit Levon Helm. Given that Helm, the only American member of the group, is beloved in his home state of Arkansas, it's always been convenient to frame the story of The Band as The Ballad of Levon and Robbie.

But "Stage Fright," as a listening experience, really belongs more to Manuel and Rick Danko, the group's other two lead singers. (In the beginning some counted Robertson as a lead singer too, but he concentrated on playing guitar during the "Stage Fright" sessions and has, since the early 1970s, been regarded as a supporting vocalist in The Band. Nevertheless, early on, Rolling Stone's Ralph Gleason and others referred to The Band's "four lead singers.")

Born in 1943, Manuel grew up in Stratford, Ontario, which I always assumed was a small town, something like the fictional Letterkenny depicted in the streamable Canadian comedy series (which is far funnier than "Schitt's Creek"). But a Canadian correspondent insists that, even in the 1950s, even though it's about 90 miles southwest of the big city, Stratford would more properly have been considered an exurb of Toronto than a sleepy rural community. His point was that Manuel was not a hick.

In any case, Manuel's background was not dissimilar to that of many small-town Canadian kids. He sang in church choirs, took piano lessons and was intoxicated by early rock 'n' roll. But Manuel wasn't content to accept the offerings of commercial AM radio; at nights he tuned into the Nashville blowtorch WLAC to hear disc jockey John R.'s show that featured blues artists like Muddy Waters, Jimmy Reed and Otis Rush. By the time he was 15, Manuel was singing and playing piano in the bar band the Rockin' Revols (a phonetic styling of "Rebels," Duane Eddy's band).

He was 18 when Fayetteville native Ronnie Hawkins asked him to join his backing band, the Hawks, comprised at the time of 21-year-old Helm on drums, 17-year-old Robertson on guitar and 18-year-old Danko on bass. (A few months later, 24-year-old organist Garth Hudson would join the Hawks.)

Hawkins, a vocalist who didn't play an instrument, thought Manuel was a "better pianist than Van Cliburn" but he was more impressed with his voice.

"Richard had the greatest voice in the world," Hawkins told Martin Levin for a 1996 article in Toronto Life. "Great throat. Great phrasing."

Hawkins was a disciplinarian who forbade the use of drugs by his sidemen. But the Hawks were hard partiers, and the band's residence at the Le Coq d'Or soon established them as the toast of Toronto's Yonge Street.

"I guess he [Manuel] must have had a drinking problem then," Hawkins told Levin. "But he never messed up in performance, and that's what mattered to me."

By 1970, The Band was one of the world's best rock 'n' roll bands. While they may never have sold as many records as some of their contemporaries — their albums went gold, not platinum, and Joan Baez had a bigger hit with "The Night They Drove Old Dixie Down" than The Band did — they had achieved a certain cachet. They were critical darlings, Bob Dylan's hangout buddies. Eric Clapton wanted to join them.

Four-fifths Canadian, they evinced a certain outsider's perspective as they all but invented what we now call Americana. There was a certain naive purity to the group — only Robertson was an urban product. When they moved to Woodstock in 1968, Manuel, Danko and Hudson all lived together in the house that came be known as Big Pink. The three shared a dog, Hamlet, and lived a pastoral, communal and markedly small-town existence.

It was slow around Woodstock. There was time to kill. Hawkins no longer rode herd over his boys; they were free to take heroin and wreck cars. Manuel developed an especial fondness for Grand Marnier, a viscous French liqueur blended from cognac, distilled essence of bitter orange, and sugar. It's a sweet, throat-coating drink that Bo Diddley once offered up as the perfect thing to "keep the throat from drying up in a place where there's a lot of smoke."

By 1970, Manuel was drinking eight bottles of the stuff a day. He'd all but stopped composing songs. He'd had four composing credits on "Music From Big Pink" and three co-writes with Robertson on "The Band." On "Stage Fright," he's credited with co-writing "Sleeping" and "Just Another Whistle Stop." But Robertson would write these lyrics about him:

Robertson wrote the title track for Manuel to sing, but it turned out "Stage Fright" was better suited to Danko's jittery voice. That song is allegedly about Bob Dylan, and it's all about fortune and fame:

David Geffen once said he never knew anyone as interested in money as Dylan, and Robertson was, at the very least, the most practical member of The Band. Whether you buy his version that his mates left him, that they all retreated into drugs and lassitude and left him to do the hard work of writing songs and organizing tours, or whether you take Levon's side and think that Robbie blew up something beautiful because he wanted to go Hollywood, the truth is that "Stage Fright" closes a chapter for The Band.

The next album, "Cahoots," is a listless hodgepodge redeemed somewhat by their cover of Dylan's "When I Paint My Masterpiece," which features what is perhaps Helm's most mournful singing ever (a dark-horse contender for best rock vocal ever).

They moved to California, Manuel to a Malibu beach house. He hardly ever wrote again. When he moved out of that house in 1976, they found 2,000 Grand Marnier bottles. He was taking the sedative placidyl to sleep. In her autobiography, famous groupie Cathy Smith — who shot John Belushi up with his last speedball and about whom Gordon Lightfoot wrote "Sundown" — wrote that he was "exactly like his singing voice — sad, sweet and soulful, a little boy lost."

Manuel hanged himself in a motel in Winter Park, Fla., near Orlando, after a show with the reconstituted Band in 1986. No one knew why, but no one seemed all that surprised.

Danko died in his sleep 10 days after finishing a tour in 1999. Helm died from complications due to throat cancer in 2012.

Garth Hudson and Robbie Robertson are still around; both pursue their art in their own ways.

"Stage Fright" is not an easy record; it feels uncomfortable in its own skin, a little jumpy, a little self-conscious. But it has moments that will make you fall in love with it.

The album comes down to Manuel and Danko, to "The Shape I'm In" and "Stage Fright" — the frailest, most vulnerable links in the chain.

When Jason Isbell was in the Drive-By Truckers, he wrote a song called "Danko/Manuel," with an elliptical lyric that alludes to the end of The Band and the deaths of these two Canadians. The song appears on the 2004 album "The Dirty South," a concept album about what we might describe as the condition of the American South, the lies and masks implicit in living in the region:

You can't listen to "Stage Fright" without hearing the songs of ghosts.