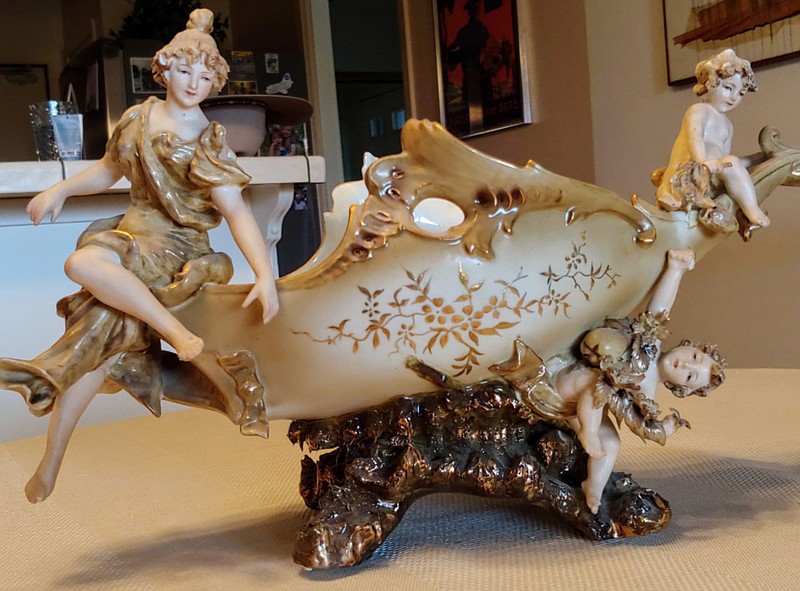 DEAR HELAINE AND JOE: I'm sending pictures of my German antique porcelain centerpiece, which measures 17-by-8 inches. On the bottom are two crossed arrows with the number "6298." Could you please date this piece and tell me who made it? Any thoughts on value would also be appreciated. It is in excellent condition and was acquired in the 1950s.

DEAR C.C.: We need to get this said right up front because we are reminded of the song from the Broadway play "The Wiz" titled, "Don't Nobody Bring Me No Bad News," and unfortunately we have to share a bunch of not-so-good news today.

But starting with the positive, this is an extremely attractive porcelain centerpiece, and it would be visually spectacular on a festive dinner table or holiday mantelpiece. The three-dimensional figures of cherubs and the Art Nouveau style lady are eye-catching, and the design suggests it was made turn-of-the-20th century or just a tad before — but that would be incorrect.

We understand why C.C. thinks this may be a "German antique centerpiece" because the crossed arrow mark could be that of the Porcelain Factory Kalk, which was founded in Cologne in 1863 but moved to Eisenberg, Germany in 1904. Kalk's crossed arrow marks are similar but Kalk never used a four-digit number under its insignia.

Instead, this symbol is one that was used by Arnart Creations/Arnart Imports, which was founded in 1953 and had an office on 5th Avenue in New York until about 2001. If C.C. will look closely at the bottom of her centerpiece, she will also see the remnants of a paper label that appears to be the sort of label that Arnart used in conjunction with the crossed arrows mark.

We found vague discussions of a company named Home Interiors & Gifts (HomCo) that also used the crossed arrows mark and it is said that HomCo's pieces can be differentiated from Arnart's by the number combination under the arrows and the fact that the arrows have four feathers.

The arrows on the piece in today's question have four feathers, but we believe this piece was imported into the United States in the 1950s by Arnart. We discount the HomCo references because this company is known almost exclusively for its figural production that ranges from porcelain flowers to Nativity images.

In summation, this centerpiece was made in Japan by an unknown company sometime in the mid to late 1950s and was imported into this country by Arnart Creations, which was probably responsible for the Art Nouveau style design. Most serious antiques collectors would brand this a reproduction and have little interest in it because of its age (or lack thereof) and origins.

But many of today's buyers are not so picky and are interested in the "look" rather than the substance. This more eclectic buyer would see this piece as large and attractive, both useful and decorative and might pay $75 to $125 to own it.