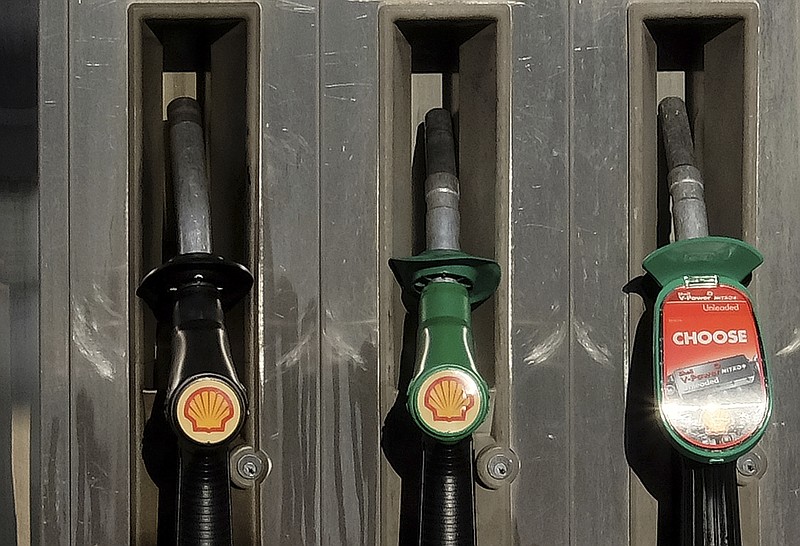 FILE - In this Wednesday, Jan. 20, 2016 file photo, the Shell logo on pumps at a petrol station in London. Global energy company Shell said it plans to eliminate seven refineries and reduce production of gasoline and diesel fuel by 55% over the next decade as it unveiled new plans for reaching its goal of being carbon neutral by 2050. (AP Photo/Kirsty Wigglesworth, File)

LONDON -- Royal Dutch Shell, one of the multinationals that has defined the oil industry, is slowly turning away from the fossil fuel that made its fortune over the decades but also worsened a global climate crisis.

The company said Thursday that its production of oil peaked before the coronavirus pandemic and will fall steadily as it attempts an ambitious pivot toward less polluting forms of energy. It's a milestone for the company and reflects the urgency facing governments and companies to reduce climate-warming emissions.

Shell unveiled new plans for reaching its goal of being carbon neutral by 2050 that include a 1% to 2% drop annually in oil output. It will eliminate seven of its 13 refineries and aims to cut production of gasoline and diesel fuel by 55% over the next decade.

The plan is part of a wider push, particularly among European oil companies, to overhaul their operations to reduce carbon emissions blamed for global warming while still making money. BP said last year that it wants to eliminate or offset all carbon emissions from its operations and the oil and gas it sells to customers by 2050.

Critics say energy companies have been moving too slowly to cut carbon emissions in a United Nations drive to limit temperature increases to no more than 2.7 degrees over pre-industrial levels.

"Our accelerated strategy will drive down carbon emissions and will deliver value for our shareholders, our customers and wider society," Shell's chief executive officer, Ben van Beurden, said in a statement.

Shell plans to increase production of liquefied natural gas, low-carbon fuels such as bioethanol and hydrogen as it seeks to eliminate or offset all carbon emissions from the company's operations and the products it sells.

It plans to increase its network of electric vehicle charging stations to about 500,000 by 2025 from 60,000 today and double electricity sales to retail and business customers. Shell said that it will invest $100 million annually in "nature-based solutions" that protect or redevelop forests, wetlands and grasslands that take carbon out of the atmosphere.

David Elmes, a professor at Warwick Business School in England who heads the Global Energy Research Network, said Shell's plan to reduce emissions is "ticking all the boxes" but the question remains whether the company will be able to make the shift lucrative enough for shareholders used to generous dividends.

The plan includes bets on new technologies such as capture carbon and storage that need a lot of investment.

"Today's plan is certainly a transformation, the question is can they afford it," he said.