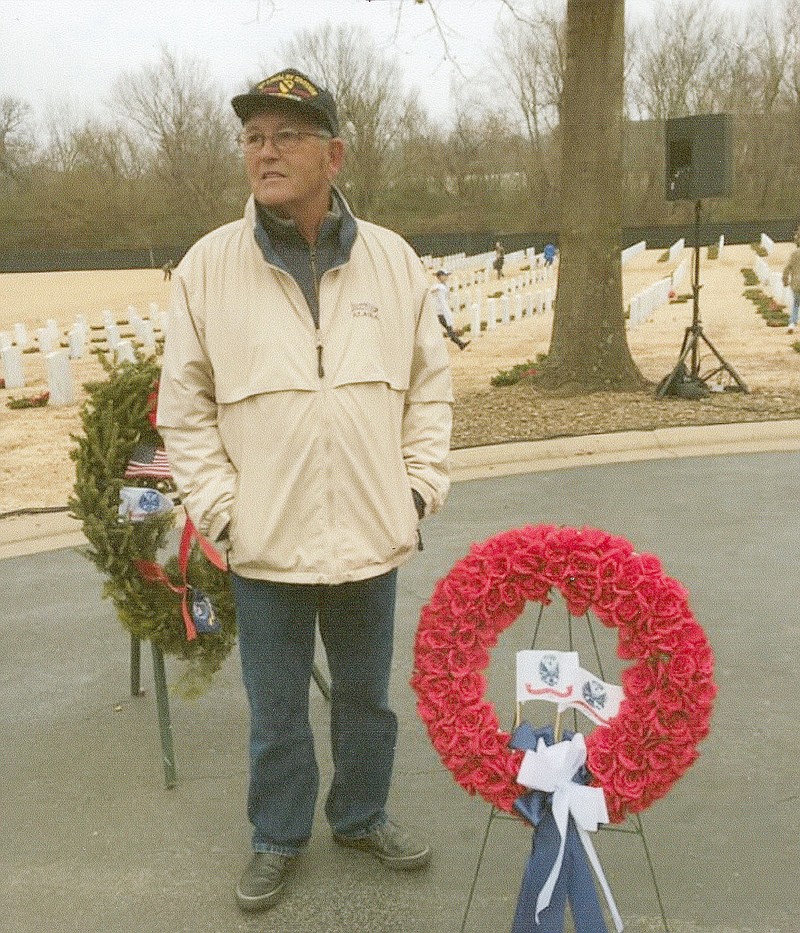 U.S. Army Specialist Calvin Chambers of Prairie Grove, a Vietnam War veteran and Purple Heart recipient, has been chosen to represent Arkansas during a week-long tribute to America's combat wounded.

Purple Heart recipients, one representing each state, plus a Purple Heart national recipient, will receive an all-expense-paid trip that includes visits to the U.S. Military Academy at West Point, George Washington's headquarters, a special tour of the newly renovated National Purple Heart Hall of Honor, the 911 Memorial and other tributes. The week will be capped with a gala in New York City and a welcome home rally.

The national representative is a veteran from Florida who was awarded seven Purple Heart medals, according to Col. (Ret.) Russ Vernon, executive director for the National Purple Heart Honor Mission in Newburgh, N.Y., a nonprofit dedicated to recognizing Purple Heart recipients through outreach and education.

"Our Purple Heart recipients have made enormous sacrifices for America, and this is our opportunity to say 'thank you' on behalf of a grateful nation," Vernon says. "For some, this will be like the homecoming they never had. We received hundreds of nominations from across the country, and we look forward to honoring Calvin for his lifelong sacrifice and service to his community."

Chambers, who was born in Prairie Grove, grew up in California and was 19 years old when he enlisted in the U.S. Army in August 1969. Although he will share his story about being wounded in Cambodia, the incident for which the Purple Heart was awarded, he says it's not something he likes to talk about.

While deployed to Vietnam, Chambers was stationed at Fire Support Base Buttons -- previously called Landing Zone Buttons, in Phước Long Province. He went to Cambodia with his platoon in early May 1970 to capture North Vietnam's stockpiles of supplies and ammunition to help the South Vietnamese.

"We wanted to make it safer for the South Vietnamese and even us to fight the war," Chambers says in a telephone interview. "There were a lot of stockpiles that were captured."

On May 25, 1970, he says the soldiers had just "got logged," which, he explains, meant they had received food, water and ammunition that was flown in by helicopter every three days. Chambers' platoon was directed to take the perimeter around the top of the hill.

As the platoon started up the hill, Chambers says there was a ridge ahead and a trail on the ridge. Chambers, who was walking lead for the right column of soldiers, says he did not want to cross the ridge and was running to catch up to his squad leader to tell him that.

Chambers says he had just stopped to put his hand on his squad leader's shoulder when the platoon was ambushed. The ensuing firefight took the lives of Chambers' squad leader and three others in the platoon and left Chambers and others wounded.

"I don't know why I wasn't killed," Chambers says with emotion.

Chambers says he dropped and rolled as soon as the ambush started. He then crawled out and grabbed his medic, who had been shot, by his legs and dragged him back to safety.

"I didn't want to go but gave in and got in," Chambers says.

He was flown to Japan for treatment, and two or three weeks later a doctor asked him if he was ready to go back to Vietnam.

"I told him I never thought I should have left Vietnam," Chambers says.

Within a few days, he was very sick and was diagnosed with malaria, causing him to be sent back to the States.

Upon returning to California, Chambers married his sweetheart, Lyla, during his 30 days of leave.

His military service ended in 1971, and in 1982, Chambers, his wife and family moved to Prairie Grove, looking for a good place to rear their children. He worked 27 years in various positions at the Veterans Health Care System of the Ozarks hospital in Fayetteville and is an advocate for his fellow veterans as commander of the Military Order of the Purple Heart Chapter 460 in Fayetteville.

Chambers says he is proud to have had the opportunity to serve his country.

"I've been able to meet some very patriotic soldiers through the Purple Heart organization. I'm proud to say we shared the same experiences. Without what we did, our country wouldn't be the country it is today."

This is the second year the Purple Heart Honor Mission has sponsored the Purple Heart Patriot Project. The 2021 event is scheduled for the end of April, but Vernon says it's possible the date may be changed to fall due to covid-19 concerns.

"It certainly will be the trip of a lifetime," Vernon says. "For us, the most important thing is to capture these histories and stories so they are never forgotten. The freedoms we have to protest and disagree are because of what our soldiers have done for us to ensure a free society."

Vernon says a Purple Heart medal is awarded only to a soldier who is wounded or killed in combat by the enemy. It is a medal awarded by all branches of service.

"So all of these recipients answered the call to duty," he says. "Our nation's combat wounded and those killed in action are America's heroes. It's the one medal a service member never wants to receive but probably is the one they are the most proud of."

Vernon says a committee made up of community leaders and veterans from the different military services makes the selections each year for the Purple Heart Patriot Project.

This year's recipients of the project include veterans from World War II, Korea, Vietnam, Afghanistan and Iraq, and they embody the "depth and diversity of America," Vernon says. "The military really is the melting pot of our nation."

The committee not only looks at the veteran's service record, it also considers what a nominee has done since coming home from war.

"Across the board, these warriors have done great things since coming back," Vernon says.

Chambers says his wife of 51 years will join him for the Purple Heart Patriot Project.

"I'm very happy to be able to participate," Chambers says. "It's the opportunity of a lifetime." 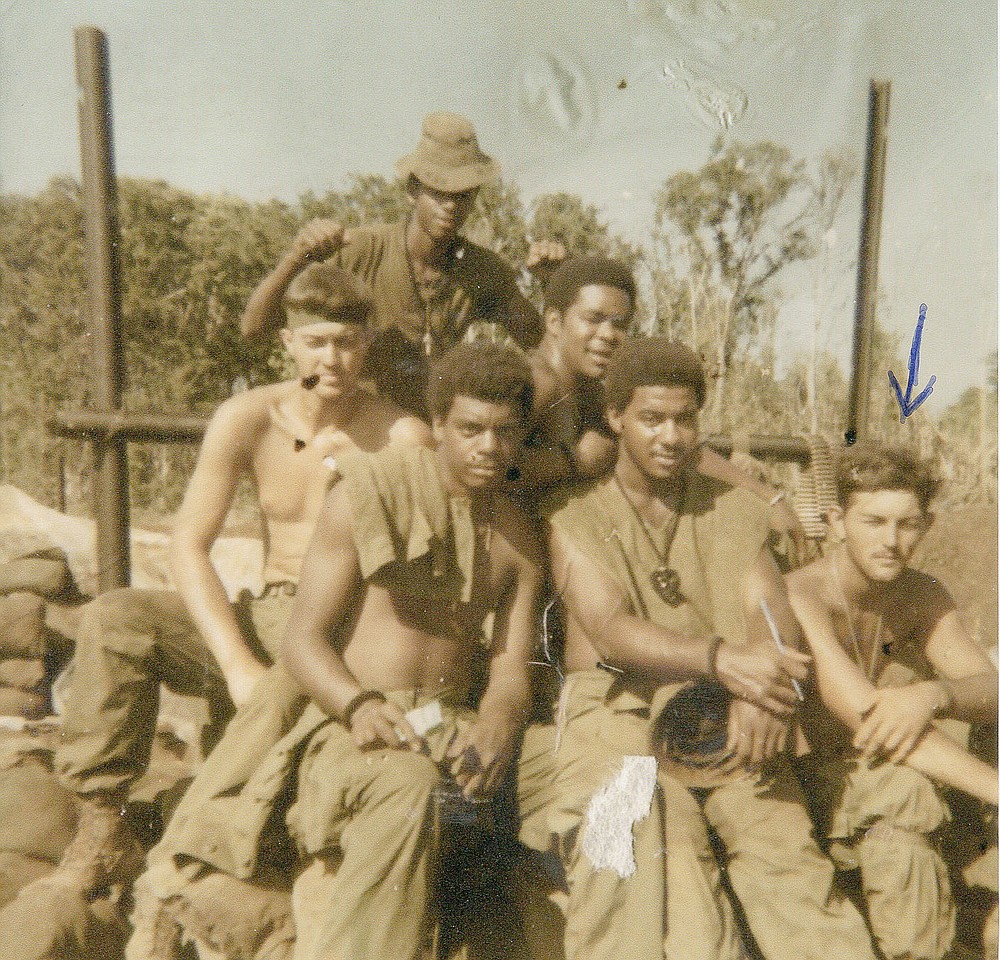 COURTESY PHOTO Calvin Chambers is pictured front, right in this photo from when he served with the U.S. Army.
ADVERTISEMENT