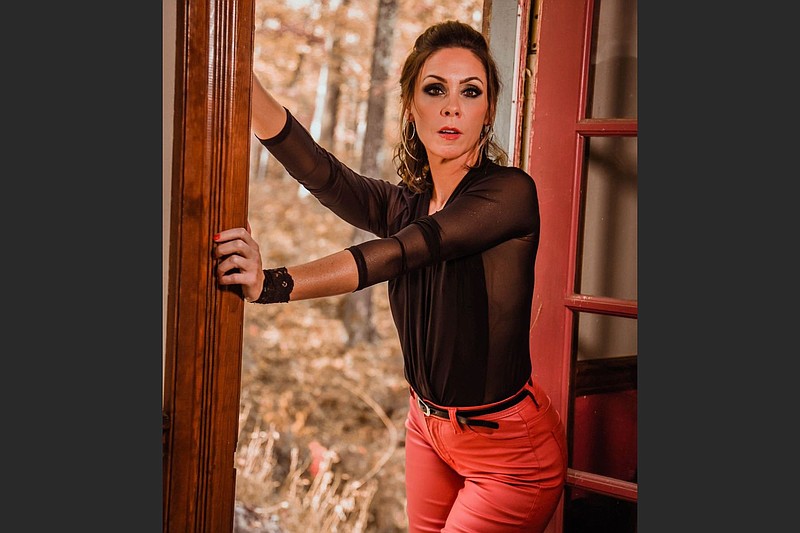 Amie Bishop is all over Hot Springs. The city is home base for the popular electronic and rock music performer. Check her out Friday night — along with Adam Merriott — at Fat Jack’s Oyster Sports Bar & Grill in Hot Springs. Find out more about the singer at theamiebishop.com. (Special to the Democrat-Gazette)

Live music is flowing like spring water in the Spa City, which you could also call Music City these days since covid-19 has pretty much silenced entertainment venues elsewhere in Arkansas. The beat goes on in Hot Springs, with all necessary precautions (supposedly) in place.

◼️ Two clubs across the street from Oaklawn Racing Casino Resort in Hot Springs, that have been around for decades, are The Frontier Club, 2700 Central Ave., and Crosswalk Bar & Grill, 2714 Central Ave. The clubs often feature live music, as well as DJs and karaoke.

Danny and Greg will perform at 4 p.m. Tuesday in the first Mardi Gras party at The Beehive, 220 Minorca Road, Hot Springs Village. (501) 777-8176; beehivehsv.com. Community Open Mic Night with Feelin' Goovy takes over from 7 to 9 p.m. on Wednesday. Admission is free; reservations recommended.

Saturday, Stickyz will host "Valenwines Soulfest 3" which will feature performances by Brae Leni & The Blackout, Courtney Shilo and Jason Talbert with Kevin Cleveland and Amberlee. Tickets are $12.50 in advance, sold in pairs. (If any remain at showtime, cost will be $15.)

Sunday, Stickyz will feature a 2 p.m. Valentine's Day show by Randall Shreve. Admission is free, but reservations are required. Doors will open at noon.

Darlingside will perform a livestream show at 2 p.m. today on Facebook.

◼️ Trey Gauthreaux, who calls himself "the Polynesian coon*," will perform a livestream concert at 7 p.m. today on Facebook, sponsored by the Murphy Arts District in El Dorado. Gauthreaux cites Waylon Jennings and Keith Whitley as his inspirations.

◼️ Trampled by Turtles will perform a livestream show at 8 p.m. today from the First Avenue club in Minneapolis. Tickets are $15, available at boxoffice.mandolin.com.

◼️ "Mardi Gras for All Y'all," featuring Louisiana musicians, chefs, sports stars and media personalities, will be held at 8 p.m. Friday through Sunday on YouTube, Facebook Live and nola.com.

◼️ Shawn Cunnane will perform at 6 p.m. Saturday in a "Deadheadland" show on Facebook.

◼️ Selwyn Birchfield will host a CD release party for "Living in a Burning House!" at 8 p.m. Saturday on Facebook.

◼️ Deanna Bogart will present her show, "A Day on the Mountain," at 9 p.m. Saturday on Facebook. Bogart, a multi-instrumentalist, has more than 40 years as a blues-rock bandleader.

◼️ Mike Roberts, an Austin, Texas, singer-songwriter, will perform a livestream set of love songs on Facebook at 6 p.m. Sunday.

◼️ A celebration of the musical life of New York Dolls' Sylvain Sylvain will be held at 6 p.m. Sunday on the site of rollinglivestudios.com, where tickets are available for $15. The show will include stories, performances and videos from David Johansen with Earl Slick, plus Debbie Harry, Henry Rollins, Thurston Moore, Lenny Kaye and Kevn Kinney with Aaron Lee Tasjan.

◼️ Singer-songwriters John Paul White, Cedric Burnside and Erin Rae will perform a livestream show, "Songs of Love and the Lack Thereof," at 8 p.m. Sunday. Tickets, $20, are available at boxoffice.mandolin.com.

◼️ Memphis singer-songwriter John Paul Keith will debut his new album, "The Rhythm of the City," at 7 p.m. Monday on the "Talkin' Memphis" show on radio station WYXR-FM, 91.7's Facebook site. Access is free. Fans can stream the audio at wyxr.org and Keith and his engineer, Scott Bomar, will be livestreaming from the station's studio, "so you can join in the livestream chat there and ask us anything," Keith says on Facebook. Keith has been a frequent performer at Little Rock's White Water Tavern.

◼️ Jazz group The Kurt Elling Quintet will perform a Valentine's Day livestreaming concert at 8 p.m. Saturday from Chicago's Epiphany Center for the Arts. Tickets, $20, are available at boxoffice.mandolin.com.

Sanders grew up in Zach Ridge, outside of Marshall, and now lives in Cleveland, north of Morrilton. A former Arkansas oil field worker, he was discovered by Arkansas radio personality Bobby Bones, who heard Sanders' cover of Chris Stapleton's "Either Way," which resulted in an invitation to Sanders to perform on Bones' radio show.

◼️ Check out the new version of Bob Dylan's classic song, "The Times They Are A-Changin," performed by the Nitty Gritty Dirt Band, The War and Treaty, Jason Isbell, Rosanne Cash and Steve Earle. The song is at thenittygrittydirtband.bandcamp.com/releases.

◼️ YouTube has an interesting re-telling of the heist of the legendary Gram Parsons' body after his death at Joshua Tree, Calif. See "Iconic Corpse: Gram Parsons" at youtu.be/bYuNKbxnZDc.

"The Last Remaining Juke Joints in America" is an article on spin.com, with its focus on joints in Mississippi, Louisiana and Alabama.