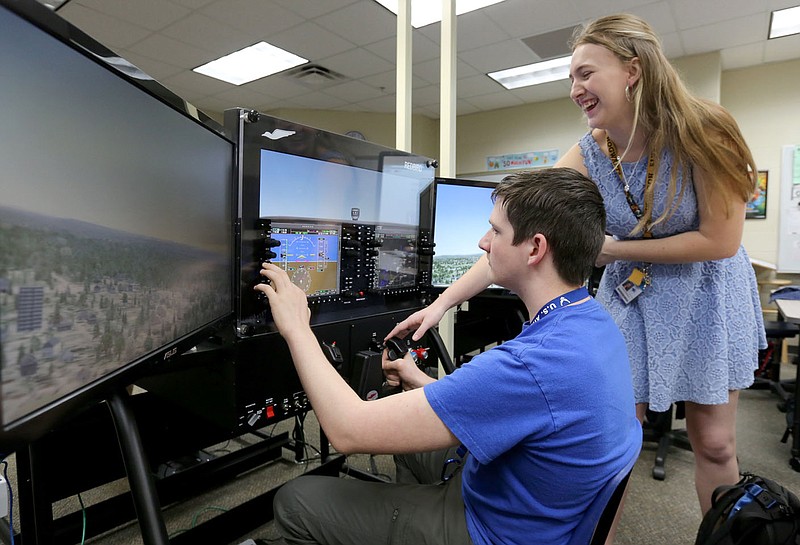 Katlyn Thompson, a senior at Har-Ber High School and first officer in the Aviation Club, helps Dylan McCuistian, a junior, take off from the city of Springdale Municipal Airport Thursday, March 12, 2020, on a flight simulator at the school in Springdale. The club acquired 15 state-of-the-art flight simulators and two teacher stations for use by its Aviation Club thanks to a grant from the Walton Family Foundation and through partnership with the Smithsonian National Air and Space Museum.(NWA Democrat-Gazette/David Gottschalk)

Making Northwest Arkansas one of the "most vibrant and inclusive regions in the nation" ranks as a major goal of the Walton Family Foundation's latest five-year plan, which was unveiled Monday.

"When we figure out ways to bridge divides, I believe it will happen in a place like this, a place with the places and spaces that provide the experiences that bring people together," said Karen Minkel, the foundation's Home Region Program director.

"Whether it's doing business together or just getting on the walking and biking trails where we see and meet each other, someplace like this is where it will happen," she said.

The foundation is led by descendants of Sam and Helen Walton, founders of Walmart. The five-year plan has three major areas of emphasis: improving K-12 education nationwide; protecting rivers and oceans and the communities they support; and investing in the Northwest Arkansas and the Arkansas-Mississippi Delta regions.

In 2019, the foundation awarded more than $525 million in grants, according to a news release Monday.

The "home region" part of the plan includes support for Northwest Arkansas' diverse and innovative regional economy, the plan's announcement said, so small businesses and startups can flourish and world-class cultural and other opportunities are accessible to everyone.

Efforts will include help and support for promising businesses from entrepreneurs of all backgrounds, whatever that need happens to be, Minkel said. The foundation will seek to connect such an entrepreneur with the relevant group or groups anywhere in the state or nation whether that need is for investment or advice, she said.

For example, businesses owned by entrepreneurs from other cultures had difficultly in obtaining the small business loans provided by the federal government to help those businesses survive the covid-19 pandemic, Minkel said. The difficulty was in getting through government and loan processes and procedures that are much more familiar to long-established businesses and groups.

The foundation will also encourage support for emerging leaders of diverse backgrounds in all community endeavors, including nonprofit and cultural efforts, she said.

The foundation's commitment to supporting diverse entrepreneurs is a real and recognized boon to the Northwest Arkansas region, said Geovanny Sarmiento, vice president of community engagement and inclusion at the Rogers-Lowell Area Chamber of Commerce.

"The issue is not whether we're going to be diverse anymore. We're more diverse by the day," Sarmiento said. Even among the obvious classifications, there's diversity, he said. Most Spanish speakers in the region may be of Mexican descent, but large segments of Spanish speakers come from other countries and regions within countries, he said.

The issue is whether a businessman whose first language is Spanish can find Spanish-speaking attorneys, insurance agents and others advisers to help him in business, he said. 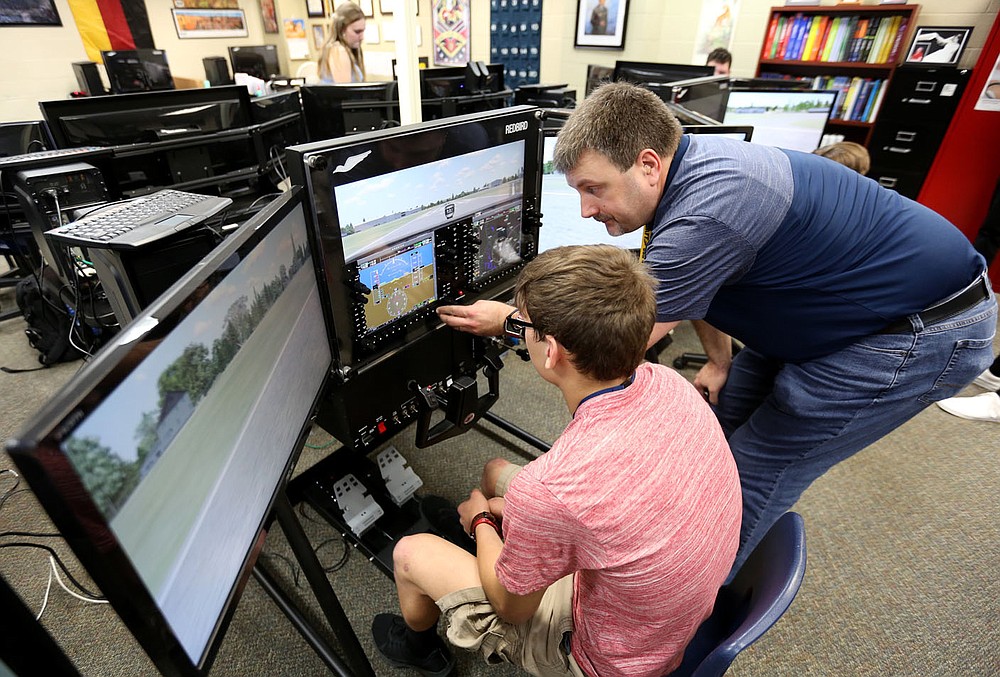 Jason McMullen, teacher and Aviation Club adviser, reviews the instruments with Lukas Croson, a junior at Har-Ber High School, before he takes off from the city of Springdale Municipal Airport Thursday, March 12, 2020, on a flight simulator at the school in Springdale. The club acquired 15 state-of-the-art flight simulators and two teacher stations for use by its Aviation Club thanks to a grant from the Walton Family Foundation and through partnership with the Smithsonian National Air and Space Museum. Check out nwadg.com/photos for a photo gallery. (NWA Democrat-Gazette/David Gottschalk)
More News