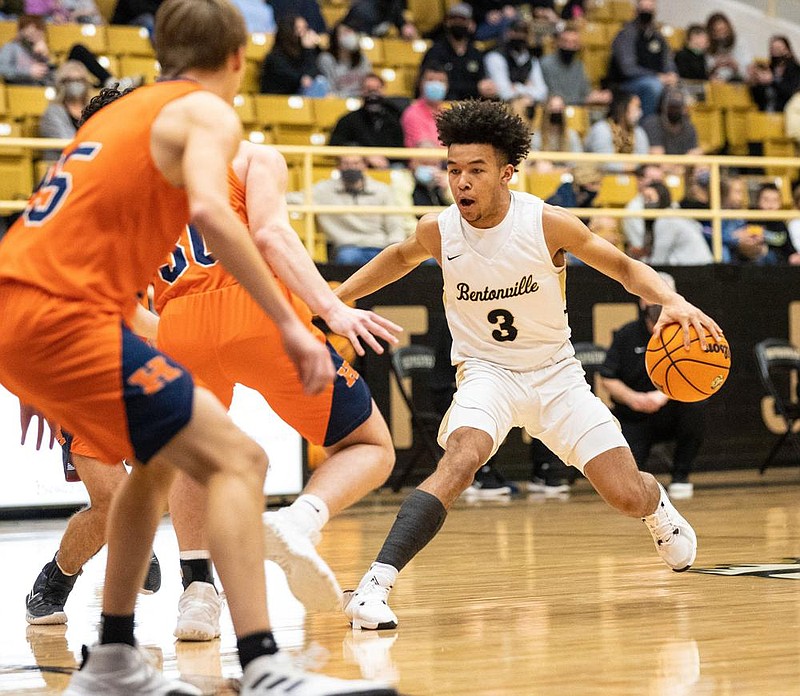 The Tigers knocked down eight three-pointers in the first half and 11 in the game in an 82-50 victory Friday night against Rogers Heritage in 6A-West Conference action at Tiger Arena.

"My guys set me up in the right spot to make the play," said Hicks of the three-pointer that came off the opening tip. "That is huge for my confidence, for the team's confidence in me. That helps me get going and that helps the team get going."

Hicks repeated the shot on Bentonville's next possession for a quick 6-0 lead and the Tigers (16-1, 10-0) were only mildly threatened the rest of the way against an out-manned Heritage squad.

Bentonville led 8-0 and 12-5 before Heritage's Kyle Ingram, who led the War Eagles (7-13, 2-7) with 21 points, and Lucas Sarrett hit a pair of three-pointers to keep Heritage close at 12-8. But the Tigers responded with a 17-2 run that carried into the second quarter.

"We haven't been pleased with how we've been playing," Tigers Coach Dick Rippee said. "I think we've been a little bit inconsistent. Somewhere along the line, you have to make a decision about what kind of team do you want to be. I thought our guys really rebounded well tonight. I thought those shots that Harry hit early really set the tone."

Bentonville continued to pour it on in the second quarter including reserve Thane Spencer, who came into the game firing. Spencer hit a pair of three-pointers in the quarter and added a driving layup as the Tigers cruised to a 42-25 halftime lead.

"I thought we did a great job of finding open guys tonight," said Rippee, whose team faces a big road game Tuesday at Fayetteville, "and we had guys ready to shoot it."

Bentonville freshman Caden Miller was also a big part of the offense Friday night. With the Tigers shooting lights-out from the perimeter, the 6-8 Miller had room to operate in the paint, and he responded with 14 points for the Tigers.

"That is the best game he's had against really a good player in Ingram," said Rippee. "Just a really good player. I think he's a really good low-post player and I thought Caden bothered him some on his shots. We've been encouraging him because we think our team can take another step whenever he starts having confidence around the basket. "

Miller's dunk on a backdoor feed started an 11-0 run for the Tigers to open the second half. Miller's shot was followed by a barrage of three consecutive three-pointers that gave Bentonville a 53-25 lead.

Sarrett scored 16 for the War Eagles, who host Fort Smith Southside on Tuesday.

The Lady Tigers kept their 6A-West slate perfect with a victory over Heritage.

Bentonville roared out of the gate and rolled to a 23-5 lead after one quarter and never looked back.