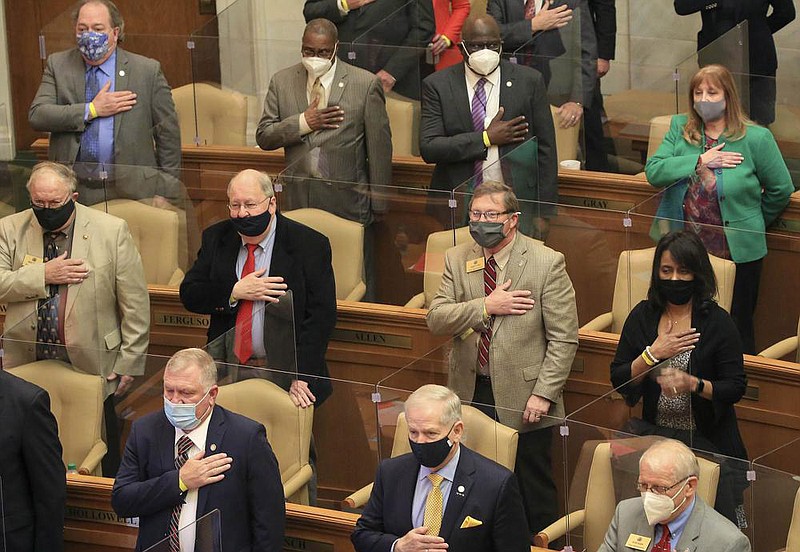 Members of the state House of Representatives recite the Pledge of Allegiance at the Capitol to begin Wednesday’s regular session. More photos at arkansasonline.com/24leg/. (Arkansas Democrat-Gazette/Staton Breidenthal)

A bill seeking to prevent cabinet-level secretaries in Arkansas from receiving payments from outside sources for their duties beyond their salaries did not receive a motion to go forward from the House State Agencies and Governmental Affairs Committee on Wednesday.

House Bill 1189, from Rep. Frances Cavenaugh, R-Walnut Ridge, targets Commerce Secretary Mike Preston, who has received performance-based bonuses of more than $50,000 in private funds from the private, nonprofit Arkansas Economic Development Foundation during each of the past five years at the recommendation of Gov. Asa Hutchinson.

Cavenaugh said special language in state law explicitly prohibits the secretary of education from doing the same thing, which she said is a double standard.

She added that Preston, whose position she did not mention specifically until a committee member asked which secretary she was referring to, also sat on the board that voted on his bonus.

“For me, it was just a complete conflict of interest,” Cavenaugh said. “We specifically said the secretary of education could not do this exact thing.”

Cavenaugh said she worked with Hutchinson’s office on amending the bill, but the governor is opposed.

“It is important to have flexibility in the salary structure for cabinet officials in order to recruit and retain top talent,” Hutchinson said in a written statement Wednesday.

The bill failed to gain a motion, putting it at the bottom of the agenda.

A bill that would allow the governor of Arkansas to implement a unified command without an executive order cleared the House Committee on State Agencies and Governmental Affairs on Wednesday.

Rep. Mark Berry, R-Ozark, said the legislation has been in the works for several years since Gov. Asa Hutchinson ordered the creation of a multiagency response plan on the heels of protests in Arkansas against police brutality in Ferguson, Mo., and Baltimore.

Berry said the legislation would have allowed law enforcement in Arkansas to respond more quickly when protesters gathered in downtown Little Rock and at the state Capitol in the wake of George Floyd’s death in May 2020.

“Hours count in those kinds of situations,” he said.

House Bill 1236 passed in a voice vote, sending it to the House floor for further action.

The Senate handily approved a bill aimed at protecting religious organizations from restrictions beyond those that are applied to secular organizations during states of emergency.

Sen. Kim Hammer, R-Benton, the Senate sponsor of the bill, said the legislation would codify a U.S. Supreme Court ruling from November that barred restrictions to slow the spread of covid-19 from being placed on religious services in New York.

Sen. Clarke Tucker, D-Little Rock, said he favors the intent of the bill, but its language could be reworked and improved. He voted present.

Hutchinson said through a spokeswoman last week that he did not see any problem with the bill because it does not affect any actions taken in Arkansas during the pandemic.

The House passed legislation on Wednesday that would allow the Department of Finance and Administration to issue state identification without a photograph of the ID holder if the person’s religious beliefs prevent him or her from having a photo taken.

Rep. Delia Haak, R-Gentry, said her House Bill 1244 was made at the request of a growing Amish and Mennonite community in her Northwest Arkansas district.

“This does affect them on a daily basis,” Haak said.

A bill that would set rules for the dates of special elections in Arkansas gained the approval of the House State Agencies and Governmental Affairs Committee on Wednesday.

House Bill 1368, sponsored by Rep. David Ray, R-Maumelle, would require the proclamation, ordinance or resolution ordering a special election to be filed at least 75 days before the date the election is to be held.

Ray told the committee that people not knowing when elections are going to be held is one of the highest barriers to participation, and voter turnout is much lower in special elections than in primary or general elections. He said the legislation would lead to lower taxes in the long run, because research shows that special elections cause tax increases to pass easily.

The committee passed the bill in a voice vote, sending it to the House floor for further action.

Legislation aimed at settling a dispute between the Arkansas Supreme Court and the Court of Appeals regarding the pay of their clerks was sent to the Senate by the Senate Judiciary Committee on a voice vote Wednesday.

House Bill 1222, by Rep. Carol Dalby, R-Texarkana, amends the law to say clerks at both courts shall “be of the same grade, unless the General Assembly approved a pay grade change.”

The law previously said the clerks shall receive the same “salaries,” though Dal-by said it was discovered that each court had a different interpretation of that meaning.

The Senate Judiciary Committee on Wednesday advanced legislation that would allow jurors to donate their daily mileage and per diem expenses to charities approved by the Administrative Office of the Courts.

House Bill 1058, by Rep. Carol Dalby, R-Texarkana, passed the House without much debate last month. In the Senate, however, it was re-referred to committee for some minor amendments.

The vote by the Judiciary Committee on Wednesday returned HB1058 to the Senate floor for a vote.

The Senate on Wednesday approved a bill that would prohibit doctors and insurance companies from discriminating against people with disabilities by blocking them from receiving or being referred for organ transplants.

The Senate voted 35-0 to send Senate Bill 155 by Sen. Breanne Davis, D-Russellville, to the House for further action.

If enacted, the bill would become “Lila’s Law” after an Arkansas girl with disabilities who required heart surgery. Her mother spoke to the committee.

The federal Americans with Disabilities Act also prohibits discrimination of disabled people from receiving transplants, but Davis said the law is often ignored and hard to enforce.

Legislation to allow students to receive both the Arkansas Governor’s Distinguished Scholarship and the Arkansas Academic Challenge Scholarship has cleared both chambers of the state Legislature.

The criteria to receive the scholarships are different, so if a student loses one they could still receive aid via another, said Rep. Lee Johnson, R-Greenwood.