'Stand your ground' fails panel vote; moving to House is next try for bill 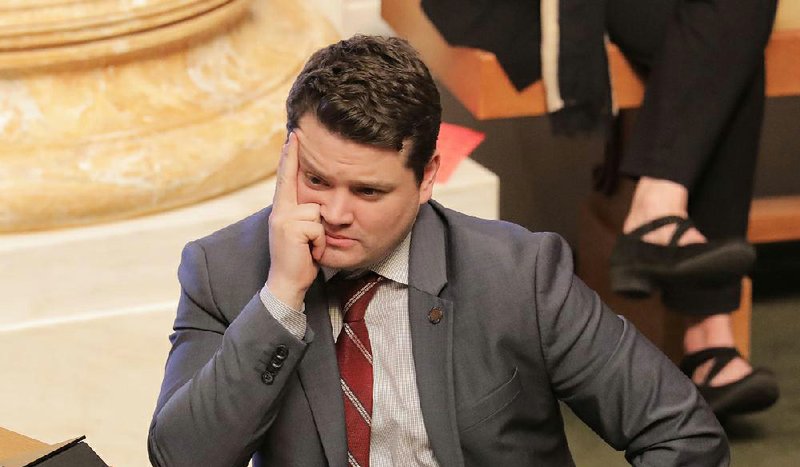 Rep. Aaron Pilkington, R-Clarksville, is shown in this photo.

A contentious bill to eliminate the "duty to retreat" from Arkansas' self-defense laws was derailed in a House committee Tuesday, after hours of testimony from opponents who said the proposal would give cover to armed vigilantes and racists.

The legislation, Senate Bill 24, is commonly referred to as a "stand-your-ground" bill, using the language of the National Rifle Association, which has thrown its support behind the bill.

But the bill has drawn fierce opposition from gun-control groups and community activists, who pointed Tuesday to studies in other states correlating stand-your-ground laws with increases in homicides, as well as the disparate success of "stand-your-ground" defenses in situations where Black people are injured or killed. Mental-health advocates, faith leaders and a coalition of Black mayors from around the state were among those who spoke against the bill Tuesday and during a rally at the Capitol over the weekend.

"This bill's not right and you know it; it's a racist bill," the Rev. Benny Johnson, president of Arkansas Stop the Violence, told lawmakers Tuesday.

Jayme Womack, an Arkansas woman whose brother was one of two innocent bystanders killed when a gunman shot into a crowd outside a bar in Slidell, La., in 2014, recalled to the committee her experience watching her brother's shooter claim self-defense under that state's stand-your-ground law. (News reports state that the shooter, Jamieon Chatman, later pleaded guilty to manslaughter and received a 40-year prison sentence.)

The House sponsor of the legislation, Rep. Aaron Pilkington, R-Clarksville, noted the divergent views of the opposition and argued that the bill was simply a matter of joining the majority of states where there is no duty to retreat.

"Somehow this bill, according to some, would take away our rights to defend ourselves and is actually bad for enhancing self-defense, and then on the other hand I heard that it would expand it and create the Wild West situation in Arkansas," Pilkington said. "How can those two things be simultaneously done at once?"

But after hearing from more than 20 witnesses who spoke against the bill Tuesday -- and one who spoke for it -- the Republican-controlled House Judiciary Committee voted against SB24 on a voice vote. The committee's nine Democrats, out of the 20 members, voted largely in opposition.

The bill's Senate sponsor, Bob Ballinger, R-Ozark, said supporters of the bill would move to extract it from committee to the House floor this afternoon. Ballinger said he believed enough Republican support remained for the bill to surpass the two-thirds threshold to extract it. The House has 100 members, 77 Republicans and 23 Democrats.

"I think it's easier to vote 'no' when you're not going to be held accountable for it," Ballinger said, referring to the fact that voice votes are not recorded for each member.

At least one Republican on the committee, Rep. Brandt Smith, R-Jonesboro, told a reporter he voted against the bill, citing the opposition from a group called Gun Owners of Arkansas, whose membership he said had been inundating him with messages.

Similar legislation failed to pass in 2019, after a single Republican on the Senate Judiciary Committee joined Democrats in opposition. That member, then-Sen. John Cooper, R-Jonesboro, later lost reelection in the March primary to a Republican who touted his support for stand-your-ground laws.

Gov. Asa Hutchinson, a Republican, has yet to announce his stance on SB24 after publicly expressing reservations about the 2019 proposal.

Since that attempt, Ballinger and his co-sponsor, Pilkington, said they have worked with prosecutors, sheriffs and police chiefs to address some of the concerns that led those groups to oppose the 2019 stand-your-ground proposal. Those groups are now neutral on SB24.

Still, some leading Republicans have remained leery of the idea.

The governor's nephew, Sen. Jim Hendren, R-Sulphur Springs, has been a vocal opponent of the bill, telling a rally at the state Capitol on Sunday that "it allows someone who can escape, in complete safety, to choose to stay and fight and kill."

House Speaker Matthew Shepherd, R-El Dorado, is a member of the Judiciary Committee but didn't attend Tuesday's meeting or cast a vote. Shepherd did not respond to a request for comment later Tuesday.

The committee chairwoman, Rep. Carol Dalby, R-Texarkana, stayed silent during the voice vote and later told a reporter that she would likely have abstained on a roll call, noting that there was not enough support for the bill in the committee regardless of how she voted.

Democrats, meanwhile, took relief in the bill's failure to pass a committee vote.

"As we said over and over, the self-defense law that we have here is perfect, there's no examples of it not working just as it should," said House Minority Leader Tippi McCullough, D-Little Rock. "If there's a chance to de-escalate and save lives, that's always [where] we think we should go."

SB24 passed the Senate last month by a vote of 27-7. If two-thirds of the House -- 67 members -- vote to pull the bill out of committee, a simple majority can vote to send the bill to Hutchinson.

Information for this article was contributed by Ashton Eley of the Arkansas Democrat-Gazette.