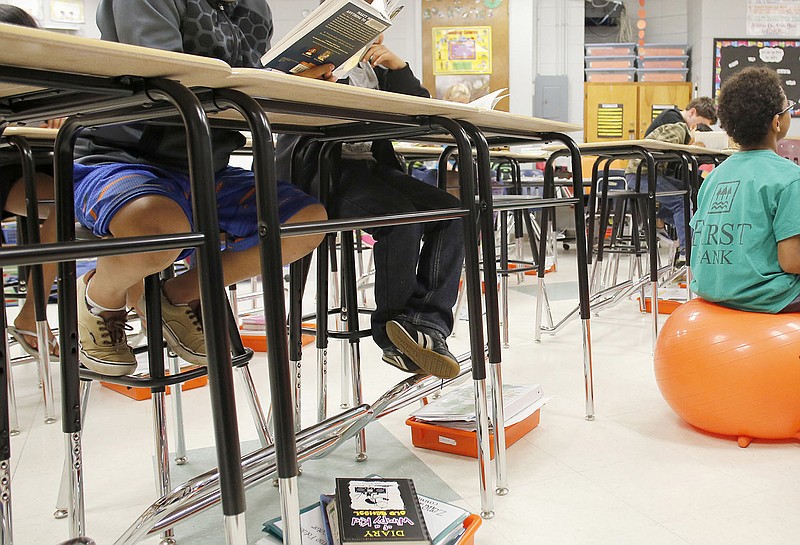 Students in a classroom at an elementary school in Fayetteville. (NWA Democrat-Gazette/FILE PHOTO)

Four Arkansas teachers have been selected as 2020 state finalists for the presidential awards for excellence in mathematics and science teaching.

The National Science Foundation oversees the program to recognize outstanding teachers who have demonstrated a commitment to professional development, innovative teaching techniques and technology use in their classrooms, according to a press release by the Arkansas Department of Education.

Lindsay Hall of Bernice Young Elementary in Springdale and Tammy Toomey of Holt Middle School in Fayetteville were selected as math award finalists, according to the release.

Fifty-eight Arkansas teachers were nominated for the awards, according to the release.

"To be selected as finalists for this national honor truly reflects the hard work and dedication of these exceptional teachers," said Johnny Key, Arkansas Department of Education secretary. "These four educators serve as role models within their respective subject area and also to all teachers around the state."

A national committee of scientists, mathematicians and educators will review the applications and recommend up to 108 teachers to receive awards in mathematics, science and computer science, according to the release.

Winners are chosen from each state, the District of Columbia, Puerto Rico, the U.S. territories and schools operated in the United States and overseas by the U.S. Department of Defense Education Activity.

Teachers selected as national honorees each receive a $10,000 award, a presidential citation and a trip to Washington, D.C., for a series of recognition events, professional development activities and an awards ceremony, according to the release.

The 2021 application cycle is now open for the Presidential Awards for Excellence in Mathematics and Science Teaching.

To learn more about the awards program, go to https://www.paemst.org.

This story was originally published at 1:54 p.m.