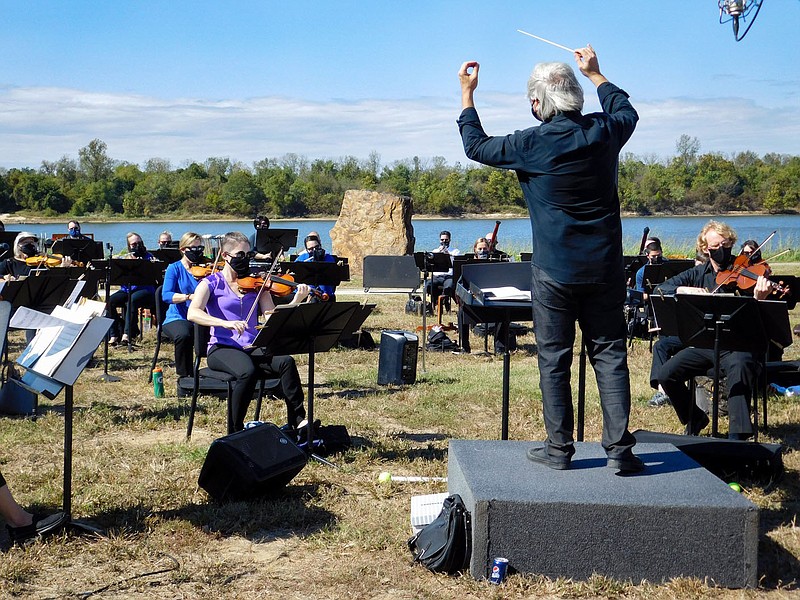 "All things considered, our 2020 concerts have been extremely successful," says John Jeter, music director of the Fort Smith Symphony. "There have been a few rescheduled concerts due to covid-19, but we have been very happy that we have been able to present live concerts with a myriad of safety features!"

Jeter and the Fort Smith Symphony Board led the way to put live music back on stage in the Northwest Arkansas and River Valley region after the pandemic shut most arts organizations down. Jeter says he "never really considered pivoting to streamed concerts only."

"The core of what we do is live performance, for which there is no substitute. There seems to be a way or ways of doing just about anything if there is a willingness to be inventive, flexible and work very hard."

As of now, the Fort Smith Symphony has given four live performances in its 2020-21 season, all of them covid-safe and audience approved.

"The size of the orchestra for these performances was about 56 musicians," Jeter explains. "Audience size was reduced greatly to comply with social distancing needs. The November concerts were performed outdoors on the grounds of the U.S. Marshals Museum, and the December concerts were indoors at the ArcBest Performing Arts Center.

"So far," he adds, "everything has been great. Despite all of the protocols, our concerts are quite similar to 'normal' in many ways and artistically as strong as ever. I think the remainder of the current concert season, which runs through May, will see performances similar to what we are doing now." And "we have scheduled and approved our 2021-22 concert season, which we plan on being a gradual return to pre-covid-19 programming and operations."

The 2021-22 season will be announced to subscribers in April, Jeter says.

"We have a great season planned of six subscription concert programs featuring approximately 40 works," he explains. "Music includes masterworks symphonies, new commissioned pieces, works by African-American composers, holiday, film music and more. The season is designed with flexibility to be presented within the current covid-19 protocols or more relaxed guidelines -- as we are all hoping will be the case eight months from now. We have offered a livestream option for some of our live subscription concerts, but we are still evaluating their long-term use."

Education is also an important part of the symphony's mission, and Jeter remains undeterred in his commitment.

"Our 2020 educational programming were presented virtually due to covid-19 restrictions on in-school presentations," he says. "We plan on returning to live in-school programs for the 2021-22 season, but we have to wait and see what the landscape is like next fall."

Jeter says the symphony's board recently approved a new three-year plan "that begins with some rebuilding due to covid-19 restrictions."

"We have had to make many changes due to the pandemic, but in reality, some of these changes are things we will probably make permanent as we move into the future," he says. "One example is that during covid, the concerts are shorter and without intermission. Audiences love the no-intermission option, so I think we will skip the intermissions in the future! This gives us the opportunity to create musical evenings with post-concert events at other venues as part of the experience. We will be possibly experimenting with this in April and May of the current season."

Jeter praises the musicians for their tenacity and flexibility and the community for its continued encouragement.

"They are extremely happy and excited to be performing," he says of the musicians. "They thoroughly understand all of the safety parameters and are doing an outstanding job being safe while performing so beautifully. They have been and continue to be super!

"Community support has been unbelievable during the pandemic and has led to the symphony being able to present our current season pretty much 'as advertised' before covid-19 reared its ugly head," he says. "We can't thank our supporters enough. We hope to see support continue as we move forward."

Next on the program for the symphony is a weekend of live concerts on Feb. 27-28, says John Jeter, music director.

“Two Classics performances on Feb. 27 featuring our Concertmaster, Er-Gene Kahng, performing the Mendelssohn Violin Concerto and Beethoven’s Symphony No. 4, and on Feb. 28 will be two screenings of Charlie Chaplin’s first full length film, ‘The Kid,’ with live orchestral accompaniment. This silent film was released exactly 100 years ago.”