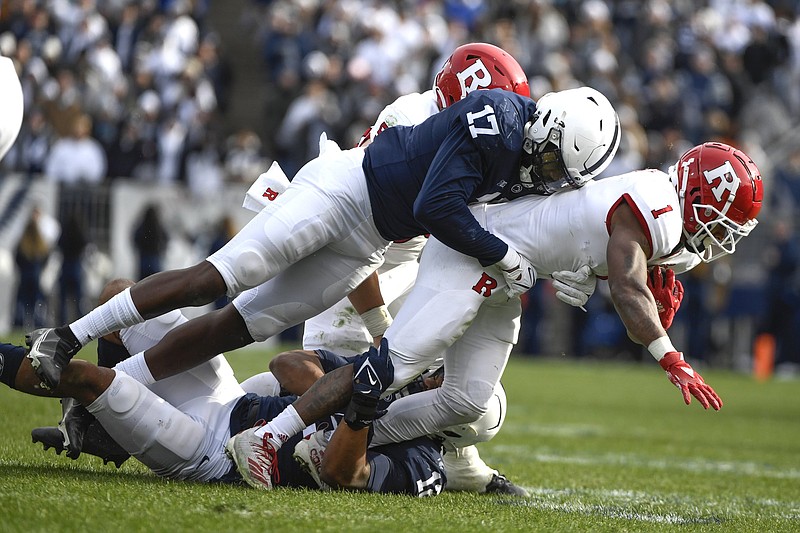 TAMPA, Fla. -- The decisions from star players that Penn State football fans had been fearing came down like harsh 1-2 punches early this week with the Nittany Lions preparing to face No. 21 Arkansas in the Outback Bowl on Saturday.

Led by Coach James Franklin, Penn State (7-5) had been a 4-point favorite on the early betting lines, but now the Nittany Lions are 2-point favorites against the Razorbacks (8-4), who also suffered key opt-out losses with receiver Treylon Burks and defensive end Tre Williams.

The Nittany Lions opened the postseason with the positive news that quarterback Sean Clifford, one of the top passers in the Big Ten, would return for a super senior season in 2022.

Since then, the list of top players to opt out has grown, starting with inside linebackers Brandon Smith and Ellis Brooks, a pair of key defenders who combined for 181 tackles.

"By Penn State just being a premier football program, I know those guys have athletes just like we have athletes," Arkansas quarterback KJ Jefferson said of facing the depleted Nittany Lions. "So I'm sure they have guys who can step in and make plays for them as well."

Penn State's linebacker depth has not been great behind Brooks, Ellis and 10-game starter Curtis Jacobs, who has 51 tackles. Jesse Luketa, a senior hybrid linebacker/end with 52 tackles, is expected to start in the middle for Brooks, while Jacobs is likely to move into a box linebacker role. Jacobs' outside linebacker slot might go to redshirt freshman Tyler Elsdon, who has six tackles.

[Video not showing up above? Click here to watch » arkansasonline.com/1229preview1/]

"They rush a lot, I see that, off the edge, the nickels," Arkansas tailback Raheim Sanders said. "So really for the running backs, of course we're working on protection because the nickel's rushing."

Sanders said Penn State's rush is reminiscent of Auburn, while Coach Sam Pittman said he figured the Nittany Lions would mimic the LSU plan of playing man coverage and blitzing with frequency.

Offensively, the Nittany Lions have a rugged line that has combined for 101 starts, led by veteran left tackle Rasheed Walker. Redshirt senior Mike Miranda has made 30 career starts, 12 at center and 9 at each guard spot. Redshirt sophomore Caedan Wallace has 19 starts at right tackle in 25 career appearances.

"Their quarterback is athletic," Arkansas defensive end Zach Williams said. "We've seen him run. He can run. We have to watch out for him and make sure he's contained."

"Sean Clifford makes plays really well," Arkansas linebacker Grant Morgan said. "He's a good quarterback who makes plays kind of continue a little longer, or he can just flip it into a spot where his receivers can get it."

"The running backs, they're bigger and they're strong, so we've got to watch out for that," Williams said. Coach [Barry] Odom has been doing some pretty good things to try to help us out with the scheme."

"[Washington] is also really good," Morgan said. "He's gonna probably step up and have a good game and they'll be able to say, 'Listen, this is what we want to do. He's gonna be our premier receiver now.' So they have ... really good athletes."

Arkansas defensive tackle John Ridgeway kept it short when asked if Penn State's offense reminded him of another team.

Auburn is the only common opponent for the teams, with Penn State notching a 28-20 win over the Tigers in Week 3 and Arkansas falling at home to them 38-23 in Week 7.

Penn State came hot out of the gates much like Arkansas, opening the year with a 16-10 win over No. 12 Wisconsin on the road to spark hopes in Happy Valley.

The Nittany Lions' five-game winning streak to open the season included their victory over No. 22 Auburn in State College, Pa.

Penn State blanked Indiana 24-0 on Oct. 2 to reach No. 4 in both major polls and set up a major Big Ten clash with No. 3 Iowa the following week.

The Hawkeyes prevailed 23-20, setting a tone for the Nittany Lions in tightly contested games the rest of the way. After an open date, unheralded Illinois edged No. 7 Penn State 20-18 in an FBS-record nine overtimes at the Nittany Lions' Beaver Stadium.

A once promising season was badly damaged. Even though Penn State played national powers Ohio State and Michigan close down the stretch, it lost five of its last seven games, four of them by four points or less, and the worst a 33-24 decision on the road at No. 5 Ohio State.