No makeup plans for CFP semifinals 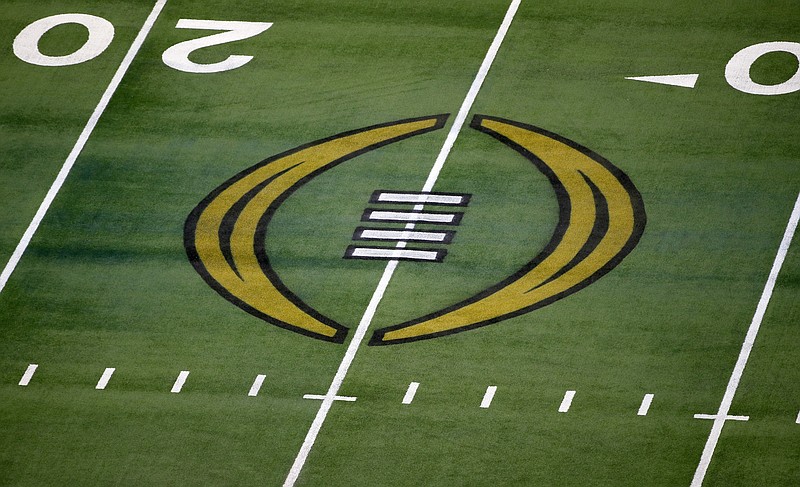 FILE - The College Football Playoff logo is shown on the field at AT&amp;T Stadium before the Rose Bowl NCAA college football game between Notre Dame and Alabama in Arlington, Texas, Jan. 1, 2021. If a team is unavailable to play in College Football Playoff semifinals on Dec. 31 because of COVID-19 issues, the game will be forfeited and the available team will advance to the championship game. With COVID-19 cases spiking across the country due to the omicron variant, the CFP announced Wednesday, Dec. 22, contingency plans for the semifinals and national championship game, which is scheduled for Jan. 10 in Indianapolis. (AP Photo/Roger Steinman, File)

If a team is unavailable to play in College Football Playoff semifinals on New Year's Eve because of covid-19 issues, the game will be forfeited and the available team will advance to the championship.

With covid-19 cases spiking across the country due to the omicron variant, the CFP announced Wednesday contingency plans for the semifinals and national championship game, which is scheduled for Jan. 10 in Indianapolis but could be delayed as much as four days.

No. 1 Alabama is scheduled to face No. 4 Cincinnati in the Cotton Bowl in one Dec. 31 semifinal, and No. 2 Michigan is set to play No. 3 Georgia in the Orange Bowl in the nightcap of the CFP doubleheader.

Not long before the CFP announced its contingency plans, Alabama announced offensive coordinator Bill O'Brien and offensive line coach Doug Marrone had tested positive for covid-19 and were isolating with mild symptoms.

Also, No. 23 Texas A&M became the first team to drop out of a bowl game, citing covid-19 issues and season-ending injuries as the reasons it would not have enough available players for the Gator Bowl against No. 20 Wake Forest on Dec. 31.

As college basketball faced a wave of cancellations and postponements due to the omicron surge over the past week, it seemed only a matter of time before it impacted bowl season.

"As we prepare for the Playoff, it's wise and necessary to put into place additional precautions to protect those who will play and coach the games," College Football Playoff Executive Director Bill Hancock said in a statement. "These policies will better protect our students and staffs while providing clarity in the event worst-case scenarios result."

The contingency plans were agreed to by the CFP management committee, comprised of the 10 FBS conference commissioners and Notre Dame's athletic director.

The CFP said each school will be responsible for determining whether it has a sufficient number of available players.

While there will be no rescheduling of either semifinal, the championship game could be delayed until as late as Jan. 14.

If a team cannot play in the title game, the available team will be declared national champion. If neither team has enough available players by Jan. 14, the championship will be considered vacated.

For the semifinals, if both teams scheduled to play each other are unavailable, that game shall be declared a no contest and the winner of the the other semifinal will be declared national champion.

If three semifinal teams are unavailable to play Dec. 31, the team that is able to play will be declared national champion.

Semifinals participants were scheduled to arrive at their bowl sites as soon as Christmas Day and no later than Sunday.

Now all bowl activities will be optional and the teams are permitted to arrive at their sites as late as Dec. 29.

The CFP said organizers for the Fiesta Bowl (No. 5 Notre Dame against No. 9 Oklahoma State, Jan. 1) and Peach Bowl (No. 10 Michigan State vs. No. 12 Pitt, Dec. 30) will attempt to identify potential makeup dates, if necessary, within a week of the scheduled game.

Earlier this week, Alabama Coach Nick Saban said more than 90% of his team was vaccinated with a booster shot, and players were being allowed to go home for a few days before the defending national champion Tide traveled to Dallas on Sunday.

"We give them a care package with everything they need to say safe, and we have implemented all the protocols here since we've been back that we had last year in terms of wearing masks to meetings, washing hands, social distancing in meetings," Saban said. "And we are encouraging the players to do that when they leave here. So we're really putting the protocols in place that we used a year ago, which was helpful to us."

At Michigan, the plan was for all the players to get booster shots as a team Wednesday.

"I think everyone understands the gravity of the situation, to have an outbreak now would be devastating to a lot of people," offensive lineman Andrew Stueber told reporters Tuesday. "Understanding the concern there is a big thing, so we've taken the proper precautions there."

The vaccination rates among college football teams are purportedly much higher than the general population. Many coaches boasted about how the vast majority of their players had been immunized before the season -- including Georgia's Kirby Smart and Michigan's Jim Harbaugh.

Most schools have been operating under guidelines that do not require regular surveillance testing of vaccinated individuals. Only those who show symptoms are required to be tested for covid-19, and vaccinated individuals were no longer subjected to long quarantines after being exposed to an infected person.

The CFP policies said schools would be allowed to use whatever protocols they used during the season, leading up to the games

"The director of athletics and the institution's chief medical officer must certify that each person with access to the playing field on game day has tested negative for covid-19 within 72 hours of the kickoff or has been fully vaccinated," the policy said.

The high vaccination rates helped major college football sail through the regular season with no games being canceled or postponed, unlike last season when the disruptions were constant.

Last season, more than 100 regular-season games were postponed or canceled because of covid-19 issues with one or both teams, and only 25 bowl games were played out of the 42 that had been originally scheduled.

The College Football Playoff was completed without delays.