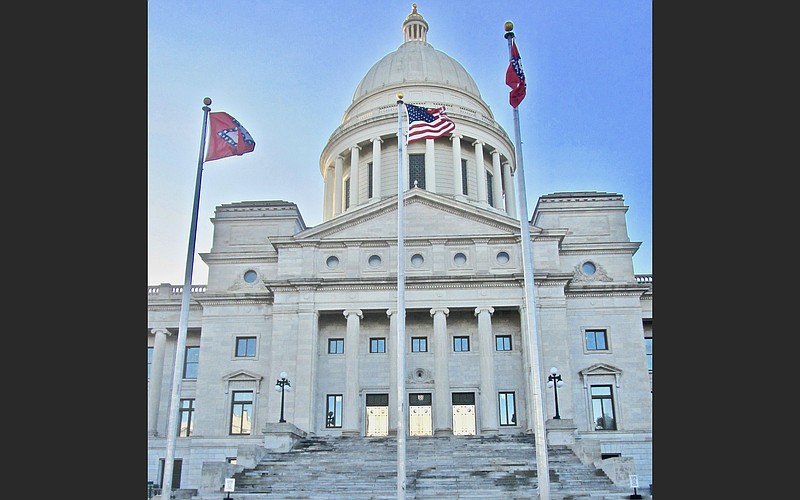 The Arkansas State Capitol is entered via the tunnel under the massive staircase. (Special to the Democrat-Gazette/Marcia Schnedler)

It was one of three executive orders issued by the governor Monday.

The infrastructure advisory committee will be chaired by Department of Energy and Environment Secretary Becky Keogh, and include Department of Transportation Director Lorie Tudor and state Game and Fish Commission Director Austin Booth as members.

Hutchinson's executive order states that the Department of Transportation and Game and Fish Commission are constitutionally independent state agencies, and "[n]othing in this executive order shall be construed as the executive branch mandating actions of those agencies."

The governor appoints members of the panels that oversee those agencies, the Highway Commission and the Game and Fish Commission.

The Infrastructure Planning Advisory Committee will review the new funds that the state expects to receive under the federal act, identify and prioritize the state's needs, and recommend how the funds should be invested, Hutchinson said in an interview.

Recommendations from the advisory committee will go to the Legislature for its consideration, he said.

Last month, the White House estimated that Arkansas would receive more than $4 billion in funding for a variety of broad infrastructure sectors over five years under the new federal law.

Arkansas will get nearly $3.6 billion for highway programs, including $278 million to replace and fix bridges based on formula funding, and about $246 million to bolster options for public transportation in Arkansas, according to the White House analysis.

The state also would be able to compete for almost $16 billion devoted to projects with "substantial economic benefits to communities" and funding from a $12.5 billion bridge investment program, based on federal projections.

Arkansas also will get a minimum of $100 million for expanding broadband coverage, and about a third of the state will also qualify for a benefit aimed at helping low-income families pay for Internet access under the new federal law, according to federal estimates.

Arkansas also will receive about $528 million to boost water infrastructure and ensure clean drinking water; $117 million for airport infrastructure; about $54 million for expanding a charging network for electric vehicles; about $23 million to defend against wildfires; and about $16 million to shield against cyber attacks over five years, according to White House estimates.

Besides Keogh, Tudor and Booth, the other members of the advisory committee include:

• Larry Bengal, chief administrator of energy at the Department of Energy and Environment.

• Julie Linck, chief administrator of environment at the Department of Energy and Environment.

• Shane Khoury, chief legal counsel at the Department of Energy and Environment.

• Wes Ward, secretary of the Department of Agriculture.

• Jami Cook, secretary of the Department of Public Safety.

• A.J. Gary, director of the Arkansas of the Division of Emergency Management.

• Mike Preston, secretary of the Department of Commerce.

• Cody Waits, director of the Office of Skills Development.

• Jerry Chism, director of the Office of Aeronautics.

• Jonathan Askins, director of the Division of Information Systems.

On Monday, Hutchinson also issued an executive order creating the Arkansas Energy Resources Council, which was recommended by the governor's Energy Resources Planning Task Force that the governor established in March to evaluate the ability of Arkansas' critical energy resources and infrastructure to withstand extreme events.

Under the governor's executive order, the council is required to meet at least once a year to foster technical and policy discussion among regulators and energy stakeholders, and to develop educational materials on best practices regarding preparedness and communication in advance and during events that may disrupt the supply of critical energy resources.

"The winter storms in February were a reminder of the toll that a natural disaster can take, which is why I have created the Arkansas Energy Resources Council," Hutchinson said in a news release. "The members of the council will facilitate ongoing conversations between state agencies and leaders in the energy sector so that we are as prepared as possible to deal with extreme events that can cause power outages and interfere with communication."

The council will be chaired by the secretary of the Department of Energy and Environment and also will include the attorney general; the director of the Division of Emergency Management; the president of Empire District Electric Co.; and the presidents and chief executive officers of Entergy, Electric Cooperatives Corp. of Arkansas, Oklahoma Gas and Electric, Southwestern Electric Power Co., Black Hills Corp. and Summit Utilities.

Hutchinson issued an executive order that he said requires certain auditors in cabinet-level departments to report to the Office of Internal Audit in the Department of Inspector General.

"This change will further enhance the integrity of our audits and give taxpayers confidence that state agencies are following the best practices of internal auditors," he said.

Hutchinson said no particular problem triggered this executive order, and it reflected the success of moving the Office of Internal Audit from the Department of Finance and Administration to the Department of Inspector General under the reorganization of executive branch agencies in July 2019.