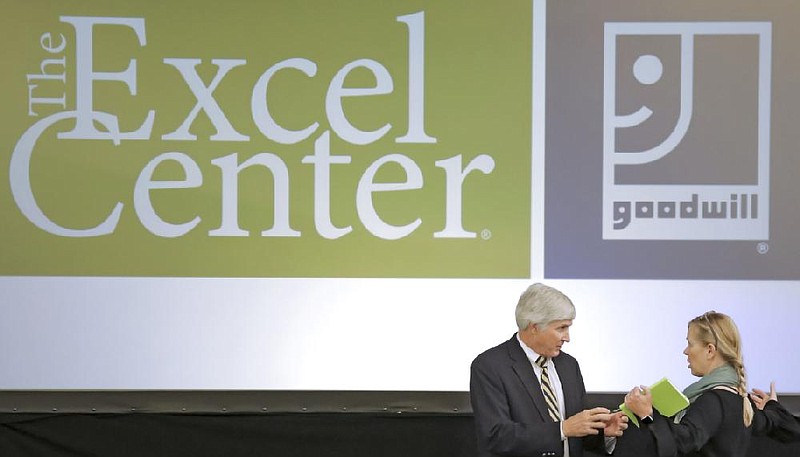 Brad Walker (left) talks with Betsy Delgado after an event in Little Rock in this September 2017 file photo. The event announced the opening of The Excel Center, an adult high school under the aegis of Goodwill Industries of Arkansas. (Arkansas Democrat-Gazette file photo)

The panel’s decisions in favor of renewing the charters for up to 10 years are now subject to review by the Arkansas Board of Education.

The panel is made up of state education leaders and interested citizens.

The state Education Board will consider the proposals early next year — before the current charters expire at the end of June.

The Education Board has the authority to accept panel decisions or conduct its own hearing on a charter organization’s application for renewal before making a final decision.

Those receiving the panel’s unanimous endorsements for renewal Wednesday were:

■ The Excel Center in Little Rock, a diploma-granting charter school that is operated by Goodwill Industries of Arkansas for adults who did not previously earn diplomas from traditional high schools.

The Excel Center and Lighthouse Academies asked for and were approved by the panel for five-year renewals of the charters they need to qualify for state operating aid.

The Exalt Academy asked for and was approved for a 10-year renewal but must report every two years to the state panel on its academic progress.

Panel members Phil Baldwin and Naccaman Williams noted that the Exalt Academy received state-issued “D” grades over the past two years in which state grades were applied to schools. That was in 2017-18 and 2018-19. The covid-19 pandemic resulted in grades not being given for the 2019-20 and 2020-21 school years.

“Great presentation and great package of material,” Baldwin said. “I’m a little bit surprised to see the score — two Ds — because it doesn’t feel like you should be graded that way. Help me understand why you have two Ds and why we should do 10 years if you have Ds.”

Tina Long, Exalt superintendent, said her school — in which 96% of pupils qualify for subsidized school meals because of family poverty and 66% are not fluent in English — puts the focus on showing academic growth rather than just proficiency.

“Our guarantee to you is that we will continue to meet every kid where they are and then grow them to a higher expectation than what the state has set,” Long said, adding that a statewide letter grade system doesn’t directly equate to a school like Exalt where many students are learning to speak English or where some of the enrolled children were unable to behave in a traditional public school.

The school teaches and re-teaches students until they have reached at least 85% mastery of the content, school leaders said Wednesday. The school — which features a 200-day school year compared with the standard 178-day year — uses a positive behavior system in which students are rewarded for behavior that improves incrementally over time.

The panel delayed until January any decision on the Exalt Academy’s proposal to double its enrollment cap from the current 540 students in kindergarten-through-eighth grades to 1,040 pupils in those grades, with 180 students added each year until the maximum cap is achieved.

The delay is because of the school leaders failing to meet a requirement that they give the local traditional school district at least 35 days notice of the request prior to the state panel taking action.

Long, the school’s superintendent for the past eight years, told the panel that the school has recently purchased its location at 6111 W. 83rd St. and will have the property paid off in five years, at which time the school can redirect its resources to making improvements to the interior and exterior of the building.

To accommodate the proposed increase in student numbers, Long said, the Exalt Academy will lease available space in neighboring buildings.

State-issued letter grades were also cited by panel members in voting to support the five-year charter renewal for Lighthouse Academies of Arkansas — contingent on a report in two years on academic achievement from what have been the low-achieving Capital City Charter School campus in North Little Rock and the Lighthouse elementary and middle schools in Pine Bluff.

John Osborn, instructional leader at the Pine Bluff schools, told the panel that the schools are emphasizing teacher collaboration through the use of professional learning communities as well as one-to-one coaching of teachers as a way to improve the rigor of teaching and learning at the schools.

Deborah Coffman, chairman of the panel and assistant state education commissioner for public school accountability, told the panel that she had visited the Lighthouse campuses and that “the progress is showing.”

School system leaders told the panel that the system is shifting way from its earlier focus on art-infused instruction to a focus of public service at its Jacksonville campuses; agriculture, science and technology at the Pine Bluff schools; and social entrepreneurship at the Capital City campus.

Also Wednesday, the panel approved the five-year renewal for the Goodwill of Arkansas Excel Academy. Panel members praised the school’s outreach to people 19 years and older who have yet to earn a high school diploma.

The school, which is separate from but connected to a career-preparation academy, features flexible course scheduling, free child care and individual life coaching for students.

Goodwill is approved by the Arkansas Board of Education to open two other similar campuses in the state and is working with state lawmakers to create a funding source for those additional schools.

CORRECTION: Arkansas' Charter Authorizing Panel voted to  support a 10-year renewal of the charter for Exalt Academy but delayed until January a decision on the Exalt Academy's request to double its enrollment cap. Additionally, the state panel endorsed the five-year renewal of the charter for the Lighthouse Academies of Arkansas with a provision that the charter system report in two years on academic achievement at two of its six campuses. An earlier version of this article included inaccurately condensed information about the two charter school systems.