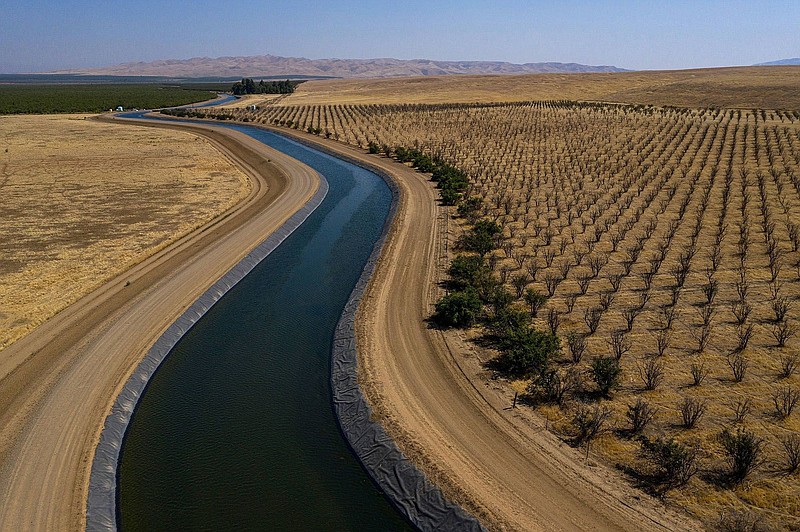 California farmers who struggled to make it through record-breaking drought and heat in 2021 are bracing for another bad year, this time without any additional water from the state.

The state said it won't give any water from the State Water Project to farmers unless drought conditions improve. That could mean even higher food prices at a time when consumers are struggling with an ongoing pandemic and inflation across the board.

"The carryover water that got a lot of farmers through this past year is gone," said Mike Wade, executive director at the California Farm Water Coalition. Farmers will either have to pump groundwater, if they can, "or they're going to be fallowing a lot of farm land," he said.

Drought conditions in 2021 already contributed to rising prices for some food products, Wade said. Prices for tomato paste and crushed tomatoes, for example, increased 22% from January to April.

This is the first time since a devastating drought in 2014 that California's farmers have gotten a zero allotment for water from the state, said Ellen Hanak, vice president and director of the Public Policy Institute of California Water Policy Center. The state's more than 69,000 farms and ranches supply over a third of U.S. vegetables and two-thirds of its fruit. The annual almond harvest accounts for about 80% of global production.

Farmers are now hoping for rain and snow. California has had only one major storm this season, Wade said, but the state needs at least four more by spring in order to make a dent in the water deficit.

"We're not holding our breath," he said.

It can take time for land to bounce back from a significant drought. In November, "it rained substantially, but it didn't fill any reservoir 'cause the ground was so dry it immediately soaked the rain," said Reese Tisdale, president of water-analysis company Bluefield Research. "You don't rebound from a drought with one rain; sometimes it takes more than a year."

Some farmers are choosing to diversify and plant more long-term crops like nut trees, Wade said. But for almond farmers, drought means not only fewer nuts but smaller, lighter ones, too, said Richard Waycott, president and chief executive officer of the Almond Board of California.

The lack of water could lead to a reapportionment of agricultural land in California over the long term, Waycott said. Farmers might migrate to safer areas where water is typically more available.

"For a grower, it's an existential issue," Waycott said. "It's the 'can I survive another year doing this' thing. It's heart wrenching."