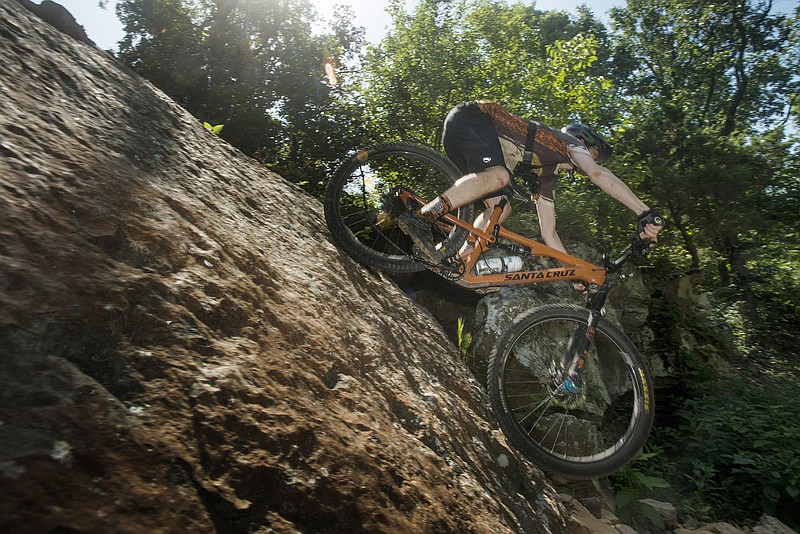 The City Council on Monday is set to review a bid of more than $2.6 million by Benchmark Construction to build a tunnel under East Robinson Avenue as a part of Dean's Trail.

The council will meet as a committee of the whole.

The city continues work on two more trail projects, while a nonprofit group builds a third one in Springdale.

Work continues on the Spring Creek Trail, which will connect the Thunder Chicken Trail head on Silent Grove Road and the J.B. and Johnelle Hunt Family Ozark Highlands Nature Center of the Arkansas Game & Fish Commission on North 40th Street.

Work also continues on the Shiloh Trail, which will link the bicycle tracks at the Jones Center with the Fitzgerald Mountain trails in the city's northeast.

Trailblazers + Ethic will gift the Shiloh Trail to the city when completed, as it did with the Fitzgerald Mountain trails. Trailblazers + Ethic (Equitable, Trails, Healthy, Infrastructure, Community) is a recent merger of Bike NWA and the NWA Trailblazers. The Walton Family Foundation backs both groups.

The Northwest Arkansas Regional Planning Commission in 2015 adopted the Bicycle and Pedestrian Trail Plan and the planning staff are working to update that plan, said Tim Conklin, assistant director of the regional commission. The project of making connections throughout Northwest Arkansas is ongoing and is nowhere near completion, Conklin noted. The region has 30 cities with trail plans for connection, he said.

Patsy Christie, director of the city's Planning Department, said the city's comprehensive trail plan also was introduced in 2015, and city planners are working to make updates.

The Walton Family Foundation in 2018 released the results of a study that found bicycling provided $137 million to the Northwest Arkansas economy, including $86 million in total health benefits.

The proposed tunnel under a busy U.S. highway marks the second phase of construction of Dean's Trail.

The first phase is open for use from East Emma Avenue to East Robinson Avenue. Dean's Trail begins at The Jones Center in downtown Springdale and ultimately will run south for 5 miles and connect with trails built by the city of Fayetteville at Lake Fayetteville.

Benchmark construction crews, if their bid is approved, will build the approaches for the Dean's Trail tunnel from where the trail currently ends west of Thrush Street on the north and along Sara Ford Avenue at J.O. Kelly Middle School to the south, said Ryan Carr, assistant director of the city's Engineering Department. Work should start in about a month, he said.

Two transportation alternatives grants from the Arkansas Department of Transportation will provide $1 million for the project. The Walton Family Foundation will add another $1 million. The remainder will come from $1 million the city budgets each year for trails.

Because Robinson also holds the designation of U.S. 412, the Transportation Department also was involved in the planning and issued its own requirements, including a four-phase traffic control plan, Carr said.

Construction will require closure of lanes on Robinson to install the concrete boxes the trail's users will pass through, he explained.

Several utility companies have infrastructure that also must move, said Brad Baldwin, the city's director of the Engineering and Public Works departments.

The City Council in May voted to pay $125,000 for construction of Dean's Trail Phase 3A, with $500,000 from the transportation alternatives grant program and $1 million from the Walton Family Foundation.

Phase 3A will run south from Sara Ford Avenue to the Springdale Animal Shelter on East Don Tyson Parkway, Carr said. The city is working on acquiring land for the route, he noted.

Phase 3B would take Dean's Trail to the trails at Lake Fayetteville. That part of the trail is under design, with the route not decided, Carr said. The route will include a tunnel under Crossover Road, he added. Phase 3B has not received money for construction, Baldwin said.

The Spring Creek Trail also is moving along.

Two bridges are in place, Baldwin reported. Crews still have to lay concrete on them and add landscaping, he said.

The cost to build the trail is $2.3 million. Spring Creek Trail will benefit from $250,000 in federal money through the Northwest Arkansas Regional Planning Commission and $380,000 from the Walton Family Foundation. The city will pay the rest.

The trail should open in late winter, Carr said.

And work has begun on the western portion of the Spring Creek Trail north of the Hunt nature center, Carr said. The trail extension will end across the street from the center. The connection to the center will be completed when the city makes improvements to North 40th Street from Falcon Road to the Spring Creek bridge.

Road work will start Monday, Carr said. The new part of 40th will include two lanes of traffic and one turn lane in the center, Carr said.

Sidewalks will line both sides of the street, with the western sidewalk a 12-foot path that will become part of the city's trail system and connect to the Razorback Greenway.

Completion of 40th is expected in summer of 2023, Carr said.

The Shiloh Trail will provide mountain bikers on the Fitzgerald Mountain trails access to downtown Springdale, the Jones Center and its pump track.

"It needs to be fun and engaging," Erin Rushing, the executive director of the former NWA Trailblazers, said in a September 2020 meeting with the Springdale Public Facilities Board. "The asphalt trail with option features will undoubtedly create a fun factor between these highly unique experiences."

The trail's plan includes a boardwalk across the undeveloped land to keep riders and hikers above a swampy area.

The trail also will rely on the natural 3% grade of the mountain to provide the fun at the north end of the trail, according to Rushing. Boulders for mountain bike-style jumps will dot the 2-mile trail, said Hogan Koesis, soft-surface project manager with Trailblazers + Ethic.

Koesis explained why the trail was designed with a hard surface rather than the soft surfaces usually used for mountain bikes.

"It's more maintenance friendly than a soft-surface trail. But it connects with a soft surface," he said.

"You can take us to a trail and point us in the opposite direction, and we will find the way for a trail," he said of his group. "There are lots of creative things you can do along a trail. And we always are looking for an opportunity to enhance or expand a trail -- but only if it makes sense."

Future projects in Springdale might include adding beginner trails to Thunder Chicken to better serve residents living near the trail.

"Sometimes we are stigmatized because we just build bicycle trails," Koesis said. "But we are trying to focus on everyone, whether you're a runner, a hiker or a dog walker. It's human nature to be active and we just want to get everybody moving, just get them out."

Christie said the city next will look to connect the neighborhoods, schools and other city amenities with the trails built over the last decade.

The City Council on Friday heard about a new active transportation planner position in the Planning Department's 2022 budget proposal. Christie said Mayor Doug Sprouse wanted the planner in that position to work on trail and sidewalk planning.

The Razorback Greenway, which opened in 2015, acts as the spine of the trails system running north to south throughout Northwest Arkansas, Christie explained.

Springdale has added east-west trail corridors to connect with the Greenway, including Dean's Trail and Spring Creek Trail, she added.

The overall vision for the regional trails system is to connect Northwest Arkansas communities together with origins and destinations, Conklin said.

He noted those connections might not be the 12-foot paths of pavement seen in the current trails; rather, they might be neighborhood streets or sidewalks.