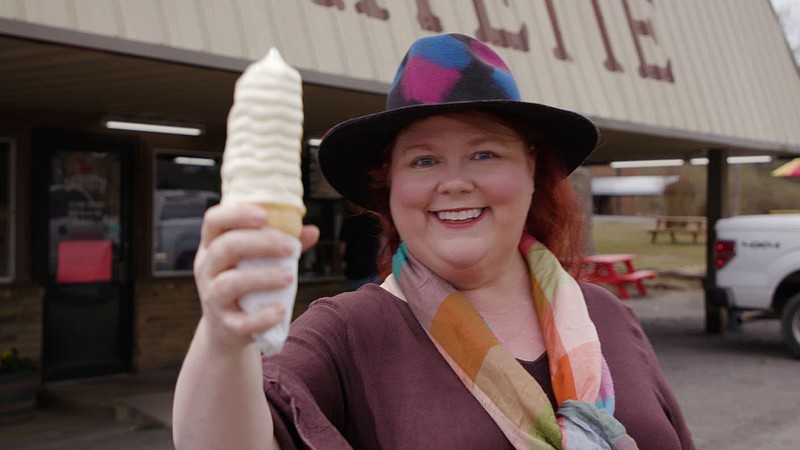 Arkansas foodie Kat Robinson is your guide this week to “Arkansas Dairy Bars,” as collected in her new book of the same name. (Courtesy Photo/Kat Robinson)

Garrett is on vacation, so instead of what’s new in eateries in your neighborhood, you’re getting what’s — well, not old, but let’s say venerable … and traditional … and charming. Your guide will be Kat Robinson, one of Arkansas’ best known food influencers, who is the author of a new book titled “Arkansas Dairy Bars: Neat Eats & Cool Treats.”

Robinson churns out books faster than you can say “sundae with a cherry on top,” but this one just might be her best ever if you’re looking for a travel guide to some of the state’s original innovators.

“We celebrate the new run of handcrafted sodas and beer and culinary wonders today,” she says, “but dairy bars, that’s where handcrafting never really left.”

As many of us remember — from real life or the TV sitcom “Happy Days” — the restaurants Robinson calls “dairy bars” were “the hub of high school date nights, or where [townspeople would] land after a local football game. Being able to hang out while waiting for your order to come up at the window, spending time with folks outside chatting or throwing around a Frisbee or comparing cars — it’s a nice way to reminisce about earlier times.”

“Well, burgers and ice cream have never gone out of style,” says Robinson, an author, a television host, a publisher, a graphic designer, a former news producer and an experimental historian. “You can go almost anywhere and get a burger that’s exactly the same as one you’d get three states away, sure. But one that’s hand patted, cooked by someone who’s become an expert on the grill? Dipped ice cream cones?

“Breaking bread together is in many ways its own trigger to create memories.”

So here for your investigative pleasure are two of her selections in the River Valley:

Since the 1940s, this button-order drive-in has been serving up a large selection of burgers, hot dogs and ice cream delights. The original edifice faced Midland Avenue and offered eight burgers for a dollar.

The restaurant’s reputation stands on its large array of ice cream offerings and on trusty, excellent burgers of all sorts — with 11 different burgers on the menu. [But] ice cream is the real star here. Dipped cones are offered in three flavors — chocolate, butterscotch and cherry. Soft serve comes in chocolate, vanilla and twist. The Peanut Cluster Parfait tops the ice cream specialties board — hot fudge and peanuts over soft serve with whipped cream, nuts and a cherry on top. The Banana Fudge Sundae and the Strawberry Shortcake Sundae are both big sellers. Shake flavors include traditional tastes as well as cappuccino and peanut butter fudge, and any milkshake can be malted.

Just up Greenwood from Ballman Elementary is this tiny but distinctive structure that offers burgers, ice cream and snow cones during the week. The Yellow Umbrella has changed little since its opening in 1957, when James Beasley built the stand right next to his small store, naming it the Tastee-Freez Drive In.

The burger shack became well known for small, inexpensive burgers, good lemonade and a double ice cream cone that had two sides for two scoops. Today, the ice cream is soft-serve, in vanilla, chocolate and twist. The burgers are still smashed on the grill. Hot dogs, chili dogs, corn dogs and nachos are all available, as are sundaes, shakes and snocones. But they’re only available between 10:30 a.m. and 4:15 p.m. Monday through Friday.

You can order “Arkansas Dairy Bars” on Robinson’s website, store.tontipress.com. I highly recommend it — and stretchy pants!

Has a restaurant recently opened or closed near you? Does your favorite spot have a new menu? Let us know by emailing [email protected].