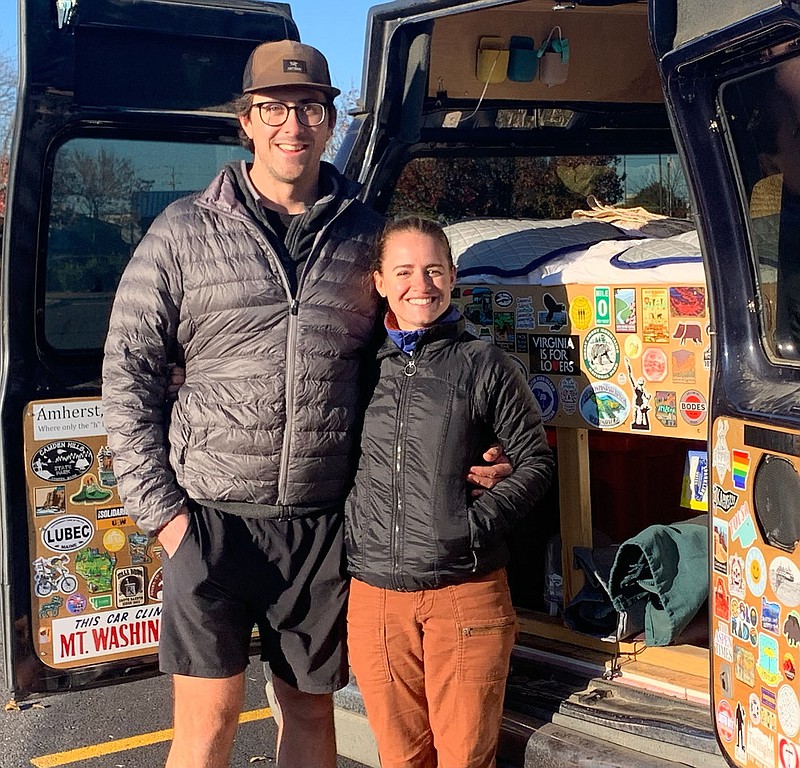 Photographer Tom Woodruff and artist Kate Fleming show the stickers they have collected on their van during their tour of the country for their All 50 States project. They made their last stop in Northwest Arkansas last week. (NWA Democrat-Gazette/Janelle Jessen).

Artist Kate Fleming and photographer Tom Woodruff were in Northwest Arkansas last week for the final stop of their American road trip.

The Arlington, Va., based couple spent the past two years traveling in a van and documenting the country for their 50 States Project.

They visited 17 states in 2019 and early 2020 before returning home because of the covid-19 pandemic. After getting vaccinated for the virus, they began their journey again in April and visited the rest of the states, including flying to Hawaii and Alaska.

Fleming and Woodruff have a vision for documenting the now, but they never imagined their trip would encompass a time when so much change was taking place, including the pandemic, demonstrations and the 2020 election. The couple at first felt like failures when they had to go home before the project was finished in 2020.

"Now the project is sort of straddling this really momentous time in American history," Fleming said.

The couple conceived the idea for the trip when they visited Australia in 2016 and realized how little they knew about their own country. After growing up in what they described as a coastal elite bubble, they were shocked by the results of the 2016 election and wanted to better understand, they said.

"It was an impulse to learn," Fleming said.

Fleming's oil paintings are created "en plein air" -- outdoors on location -- and depict the built landscape such as big box stores, parking lots, gas stations and fast food restaurants. On Nov. 18, she set up her easel to paint the garden center entrance of the Walmart on Walnut Street in Rogers.

The spaces Americans share in their everyday lives look the same across the country thanks to corporate architecture, she said.

"It's a shared experience among Americans for better or worse," she said. "I can't say it's my favorite thing to look at, but I also have fun in finding the beauty in painting those spaces."

Fleming is also documenting the now by showing what those spaces look like in 2021. Since brands evolve, the spaces will look very different in 25, 50 or 100 years, she said.

Woodruff pointed out vintage photos that look really cool now were not special when they were created -- they were just documenting ordinary scenes.

"These paintings are great now, but, in 50 years, they will have a totally different meaning," he said.

Woodruff's street photography explores a subjective, nonliteral interpretation of fear, he said. His theory is that fear is a big issue in America, so he was determined to figure out how fear will affect what the future looks like. His photos depict items that speak to fear visually, he said.

For example, some photos from the first 17 states show a sign riddled with pellet gun holes or an empty police car occupied by a mannequin.

Woodruff didn't take any pictures in Arkansas but photographed a mermaid bar in Montana, the Wyoming State Fair, the Sturgis Motorcycle Rally in South Dakota and street scenes in Chicago during the second leg of the journey.

Artists began embarking on road trips to document America almost as soon as the car was invented, Fleming said. Some well known examples include painter and print maker Edward Hopper and photographer Georgia O'Keeffe, she said.

"I think it's pretty incredible how they tapped into this idea of the American road trip and presented it in this really new and fresh way that has even more resonance after the past year and a half," said Hannah Jacobson Blumenfeld, independent project manager and co-director of Capitol Hill Arts Workshop. "It really speaks to the power of the arts to connect us in ways we might not have expected."

Capitol Hill Arts Workshop, located in Washington, D.C., is a sponsor of The 50 States Project, Blumenfeld said. The workshop was established in 1972 as part of a grassroots effort and provides classes for all ages in everything from performance art to music, dance, sculpture and painting.

"It's an incredible expansion and expression of that mission," she said.

Fleming and Woodruff did weekly video chat sessions with children about what they were doing on the road, while students did parallel projects in the classroom, Blumenfeld said.

"Getting to see real working artists out on the road is a really special part of it," she said.

Woodruff and Fleming said exploring the country has been the experience of a lifetime, though they were quick to note van life is not glamorous. Fleming compared it to setting up a campsite and breaking it down every day.

Every single state has shattered their preconceived notions, the couple agreed. Traveling and getting to know more people along the way also helped them develop empathy, Woodruff said.

Fleming and Woodruff said they learned more about themselves by seeing how other people live.

Woodruff said his best memories are staying with friends and family along the way and connecting with permanent residents of the cities and states they have visited.

They spent New Year's Eve in Key West, Fla.; kayaked in Alaska; hiked in Utah; rode mopeds in Boston; swam in the Great Lakes; and soaked in hot springs in Idaho.

"I think this may have been the most fun summer of my whole life -- just getting to go wherever we want, paint a lot, see friends and family all over the place, meet new people," Fleming said.

The couple decided to make Northwest Arkansas the last stop on their trip because they heard it was a great place to visit and they made several connections in the area, including with James Forman, owner of the The Art Collective Gallery in Rogers.

Forman got in touch with the couple after seeing Fleming's work on Instagram. He said he loves the concept of the project as well as Fleming's style. He also found Woodruff's photography project on the problem of fear interesting, he said.

"Both of their projects struck me as very timely, and I loved connecting with them," he said.

Northwest Arkansas is becoming an area for art tourism, thanks to Crystal Bridges and the Momentary, he said.

Fleming and Woodruff plan to create a book documenting their travels and an exhibit of their artwork and photography. They look at the end of their road trip as the beginning of the next chapter in their lives, Woodruff said.

"I always tell Tom, 'Don't let this be our last adventure,'" Fleming said. 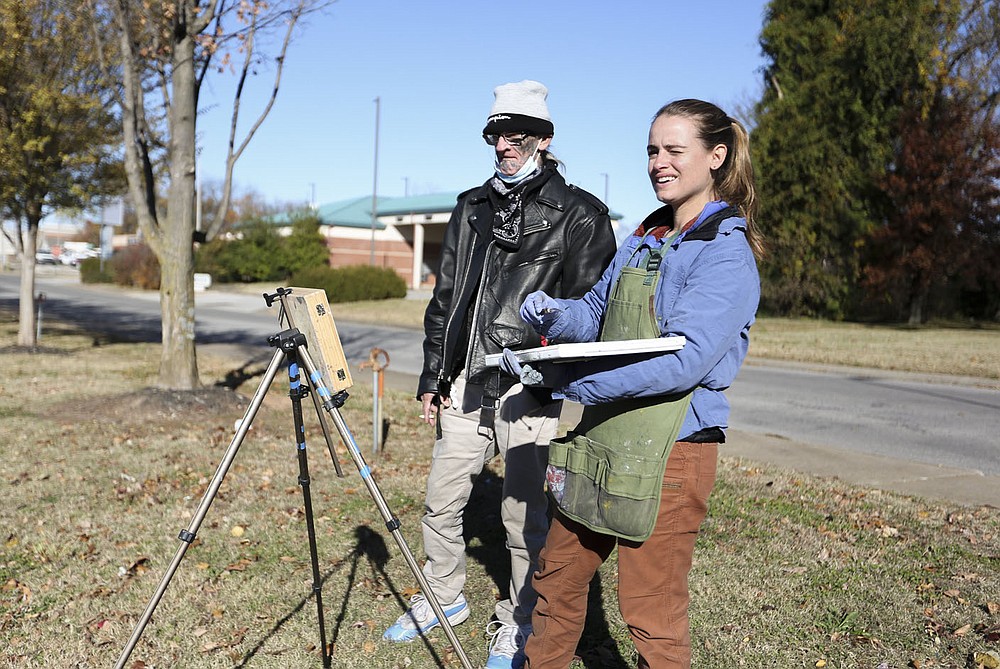 Artist Kate Fleming (right) paints as Steven &amp;quot;School&amp;quot; (left) observes her painting Nov. 18 at the parking lot of the Walmart Supercenter in Rogers. Artists Kate Fleming and Tom Woodruff of The 50 States Project finished their two-year-long tour of all 50 states in Northwest Arkansas. Check out nwaonline.com/211129Daily/ for today&#x27;s photo gallery. (NWA Democrat-Gazette/Charlie Kaijo)