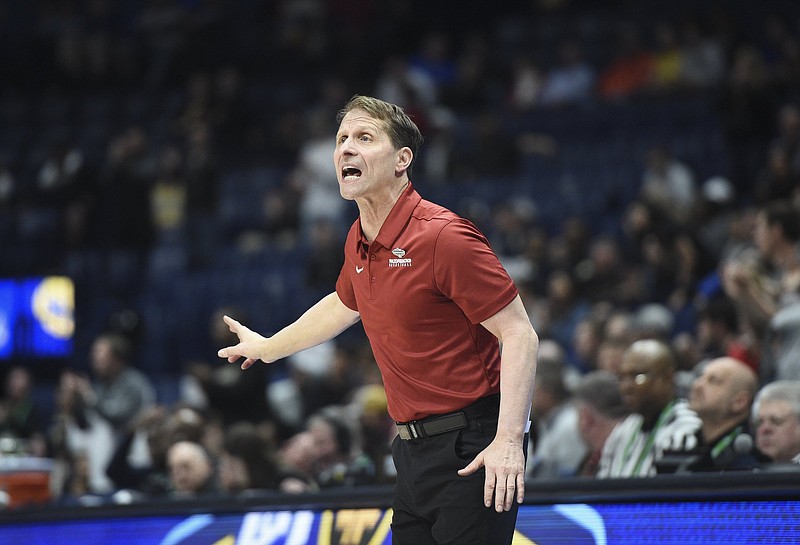 FAYETTEVILLE — Arkansas has finalized its 2021-22 nonconference basketball schedule with the announcement of games against Pennsylvania and Arkansas-Little Rock.

The Razorbacks are scheduled to host Penn on Nov. 28 and UALR on Dec. 4 at Bud Walton Arena. Arkansas’ other 11 nonconference games were previously discovered through Freedom of Information Act requests.

December’s game between Arkansas and UALR will be the first official game played between the teams. The Razorbacks defeated the Trojans 79-64 in an exhibition game on Oct. 20, 2019, when the Bud Walton Arena court was named for former Arkansas coach Nolan Richardson.

UALR is coached by Darrell Walker, a former All-America guard who lettered for the Razorbacks for three seasons from 1980-83 before a long NBA career. Walker is in his fourth season as the Trojans’ coach and has a record there of 42-45, including 11-14 overall and 7-11 in Sun Belt Conference games last season.

The Trojans must replace three of four double-digit scorers from a year ago, but return 6-10 senior forward Nikola Maric, who averaged 14 points and 5.6 rebounds last season.

Penn is led by Steve Donahue, who has an 83-64 record in five seasons as the Quakers’ coach. Donahue is also a former coach at Cornell and Boston College and has a career record of 283-278 in 19 seasons.

Donahue has led Penn to three consecutive seasons with a winning record and to the 2018 NCAA Tournament. The Quakers were 16-11 in their most recent season in 2019-20. Penn did not play basketball last season due to the covid-19 pandemic.

Jordan Dingle, a redshirt sophomore guard, is Penn’s leading returning scorer with an average of 13.5 points two seasons ago. The Quakers no longer have three of their top four scorers from that team.

The Razorbacks are scheduled to play games against Kansas State and either Cincinnati or Illinois on Nov. 22-23 at T-Mobile Center in Kansas City as part of the Hall of Fame Classic; against Oklahoma on Dec. 11 at BOK Center in Tulsa; and against Hofstra on Dec. 18 at Simmons Bank Arena in North Little Rock as part of a doubleheader with the Razorbacks’ women’s basketball team, which is scheduled to host UCA that day.

Arkansas’ men are coming off a 25-7 season that included three NCAA Tournament wins before a loss to eventual national champion Baylor in the Elite Eight. The Razorbacks are coached by Eric Musselman, who has a two-year record of 45-19 at Arkansas.