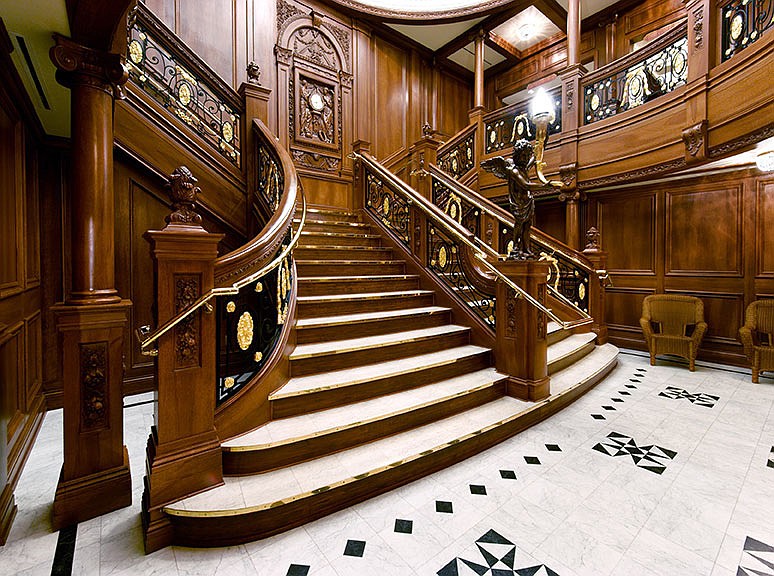 The replica of the Titanic’s grand staircase is fully the size of the original and was built at a cost of more than $1 million. The collection of artifacts housed at the museum is valued at over $4.5 million. (Courtesy Photo)

Forget the fictional Jack and Rose. The real love story on the Titanic took place between 67-year-old Isidor Straus, co-owner of Macy's department store, and his wife Ida, who was 63.

The couple's great-grandson Paul A. Kurzman, interviewed by Today in December 2017, explained that on that fateful night in 1912, as the world's most luxurious and "unsinkable" ocean liner began to take on the frigid waters of the north Atlantic, Ida was offered a spot on a lifeboat.

"My great-grandmother Ida stepped into the lifeboat expecting that her husband would follow. When he didn't follow, she was very concerned, and the ship's officer in charge of lowering that particular lifeboat said, 'Well, Mr. Straus, you're an elderly man ... and we all know who you are ... Of course you can enter the lifeboat with your wife,'" Kurzman told Today.

"And, my great-grandfather said, 'No. Until I see that every woman and child on board this ship is in a lifeboat, I will not enter into a lifeboat myself.'"

And then Ida stepped back onto the Titanic to spend the rest of her life with her husband of 40 years.

"If you know the Bible, in the tradition of the Book of Ruth, she basically said, 'We have lived our whole life together and if you are going to remain on the boat and to die as the boat sinks, I will remain on the boat with you. We will not leave one another after our long and wonderful marriage together,'" Kurzman told Today.

Ida's body was never found. But the Strauses are being remembered in a new exhibit currently on show at the Titanic Museum Attraction in Branson. They were two among the 69 known Jewish people aboard the ship and two of the 39 who perished. Research for the exhibition honoring the Jewish passengers and two Jewish crew members also revealed fascinating connections with the Holocaust, says Mary Kellogg, president and chief operating officer of the Titanic museum.

Kellogg is both a detective and a storyteller by nature, and the idea for the tribute was born about three years ago, when she became aware the Titanic had had a kosher kitchen with its own chef. Her response was "Let's start researching."

A White Star Line example of the Third Class Bill of Fare includes a statement that "Kosher meat" would be supplied and cooked for Jewish passengers as desired, according to "The Jews of the Titanic," written by Eli Moskowitz and published in March 2018 by Strauss Consultants of New York City. By 1912, Kellogg says, "it was normal for passenger ships to have kosher food aboard for their Jewish passengers."

"We even know what the dishes would have looked like, thanks to dishes that came from (Titanic' sister ship) the Olympic at a slighter later period," Kellogg says in the exhibition notes. But "as of right now, no Hebrew-marked or kosher service dinnerware/china/stoneware has been pulled from the Titanic wreck or the debris field."

Also revealed by the research were the number of Jewish passengers on board -- 31 in First Class; 13 in Second Class; 23 in Third Class; and two crew members. Of those passengers, 17 from First Class survived, three from Second Class and 10 from Third Class; both crew members died. The number is slightly different from Moskowitz's book because ongoing research revealed that some were assumed Jewish and were not, Kellogg explains.

The kind of exploration undertaken for the tribute was not new for the Titanic museum.

"Really, we pay tribute every year to new categories of people on the ship," Kellogg says. "The Irish, children, the 712 survivors, all the outstanding women, the suffragettes on board, the eight musicians, the eight clergymen -- even the 10 dogs. It's not unusual for us to identify different categories.

"But I was surprised by the connections with the Holocaust."

One connection involved the Strauses. As research revealed, the Strauses' nephew, Nathan, was a college friend of Anne Frank's father, Otto Frank, when they were students at Heidelburg University in Germany, Kellogg says.

"In 1909, Nathan Straus Jr. convinced his father to invite Otto Frank to New York to work at Macy's," the story continues. "Otto's father encouraged this, believing it would be a good opportunity to practice English and learn about foreign commerce before Otto joined the family banking business in Frankfurt."

Frank came to New York in September 1909 and returned to Germany in 1911, after his father's death. Straus and Frank remained friends, even vacationing with their families in Switzerland in 1928, and when Frank needed help to try to get his family out of Holland in 1941, he wrote to Nathan Straus Jr. The families lost contact in November 1941, and Frank's family went into hiding in July 1942. They were discovered and sent to a concentration camp in August 1944. Anne Frank and her sister Margot died in Bergen-Belsen Concentration Camp in 1945, and their mother died in Auschwitz. Otto Frank was freed when the war ended, and he reconnected with Nathan Straus in September 1945. Straus helped Frank get Anne's diary published in the United States in 1952, even asking Eleanor Roosevelt to write the forward.

Perhaps Kellogg's favorite story, though, is about the Violins of Hope, a collection of Holocaust-related stringed instruments. According to the exhibition notes, Amnon Weinstein has spent the past two decades locating and restoring violins played by Jewish musicians during the Holocaust. Kellogg first heard of Violins of Hope at a concert by the Knoxville (Ky.) Symphony in 2019 and immediately set out to bring examples of the violins to the Titanic museums in both Branson and Pigeon Forge, Tenn. Weinstein loaned her two of his unfinished restorations, and one can be seen at each museum.

For Kellogg, all roads lead to Titanic, including many more revealed in the current exhibition. And visitors are still invited to form their own connections when each receives a boarding pass with the name of an actual Titanic passenger or crew member, discovering their fate at the end of the $4.5 million collection of artifacts.

"I want to share as closely as possible with guests what Titanic's actual passengers and crew experienced aboard ship," the museum founder John Joselyn has been quoted as saying. "Visitors can touch finely carved wooden inlays, grasp the wheel on the captain's bridge, tap out messages on the ship's wireless, feel an iceberg's chill, stroll decks and galleries and listen to stories told by real survivors. I think of it as 'living theater' with guests as part of the experience. 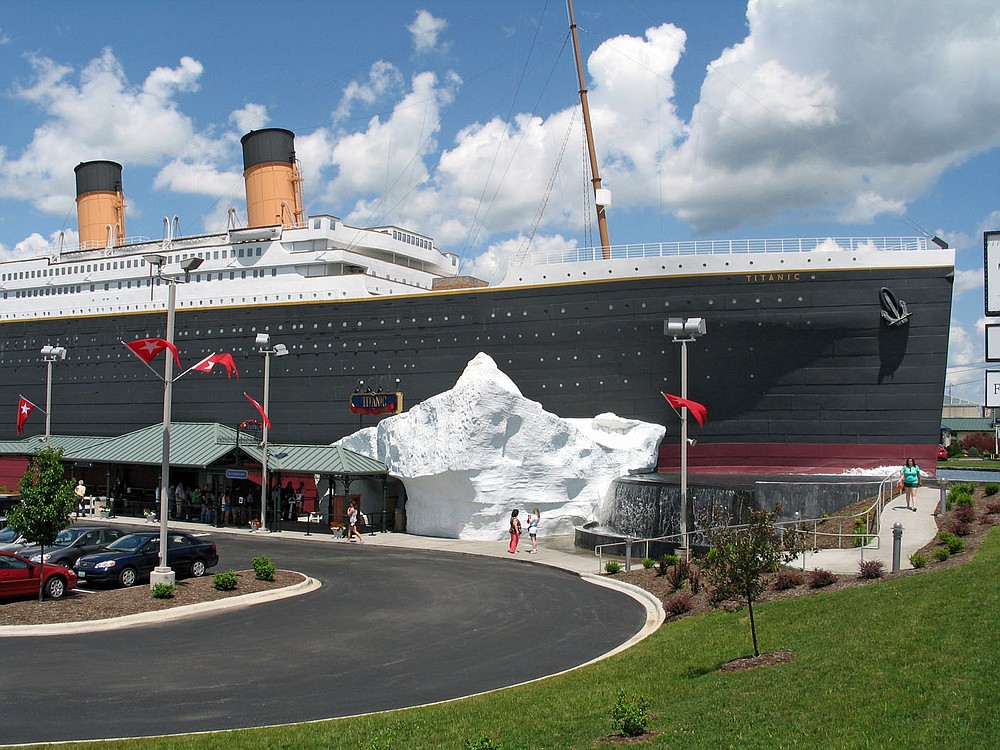 While the ship-shaped Titanic Museum Attraction in Branson seems huge, it is in fact built to half-scale of the actual ocean liner, which sank on April 15, 1912, after striking an iceberg in the North Atlantic. The museum opened in 2006. (Courtesy Photo) 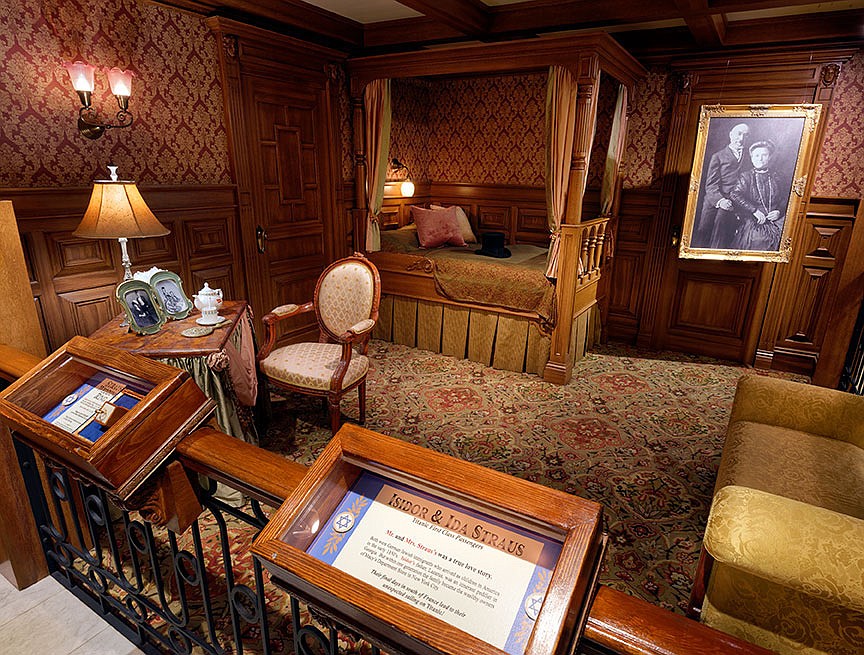 In James Cameron’s 1997 film “Titanic,” the central romance is the fictional story of Jack and Rose. In the real 1912 sinking of the massive ocean liner, Isidor and Ida Straus decided to go down with the ship — together. The Strauses are remembered in the current tribute to Jewish passengers at the Titanic Museum Attraction in Branson. (Courtesy Photo) 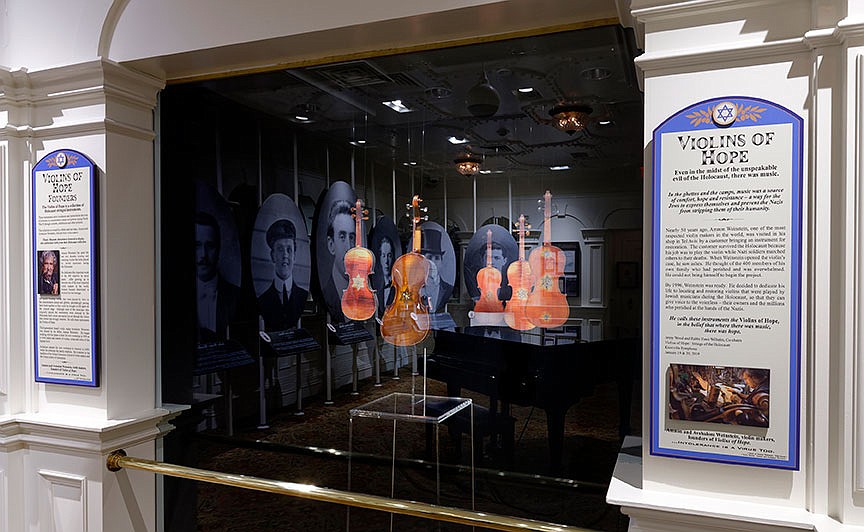 “Violins of Hope” is a project created by Israeli violin maker Amnon Weinstein to recover and restore musical instruments played by Jewish people during the Holocaust. Examples of his work are part of the current tribute to Jewish passengers on the Titanic at the Titanic Museum Attraction in Branson. (Courtesy Photo) 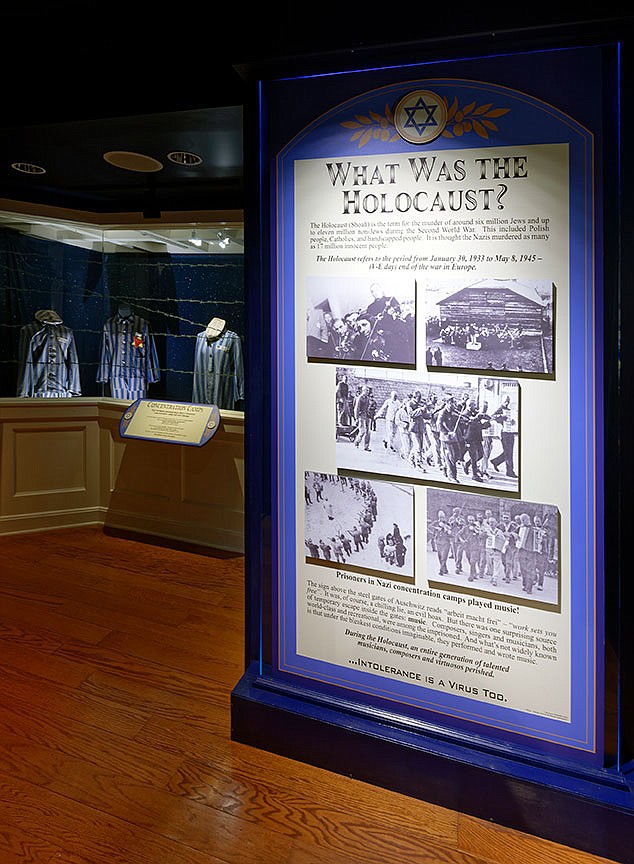 The Titanic Museum Attraction has taken the opportunity to explore the Holocaust through its connections to the 1912 ocean liner’s demise. A nationwide survey in 2020 showed 1 in 10 respondents did not recall ever having heard the word “Holocaust” before. (Courtesy Photo) 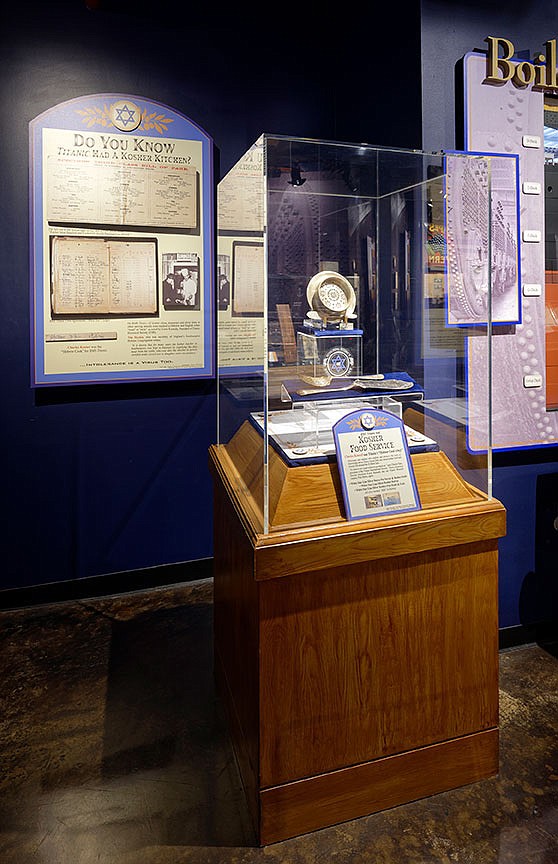 Examples of dinnerware used by the Titanic’s kosher kitchen come from its sister ship, the Olympic. None of the china from the Titanic has been recovered from the wreck. (Courtesy Photo) 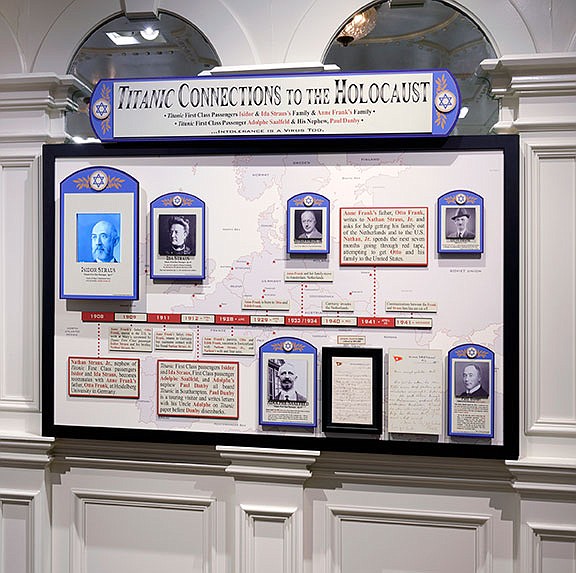 Connections between the doomed ocean liner Titanic and the Holocaust were revealed by research at the Titanic Museum Attraction. (Courtesy Photo) 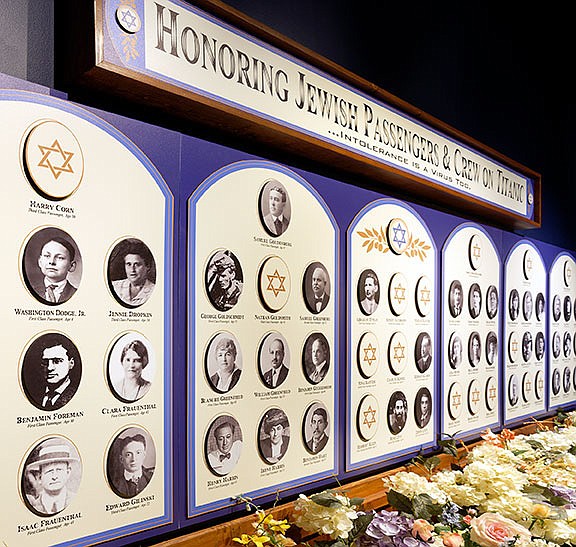 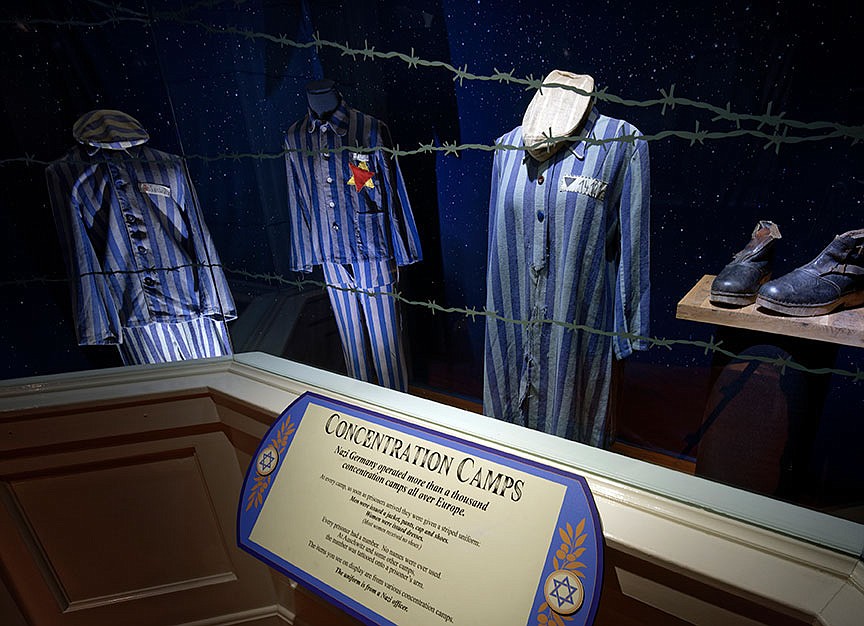 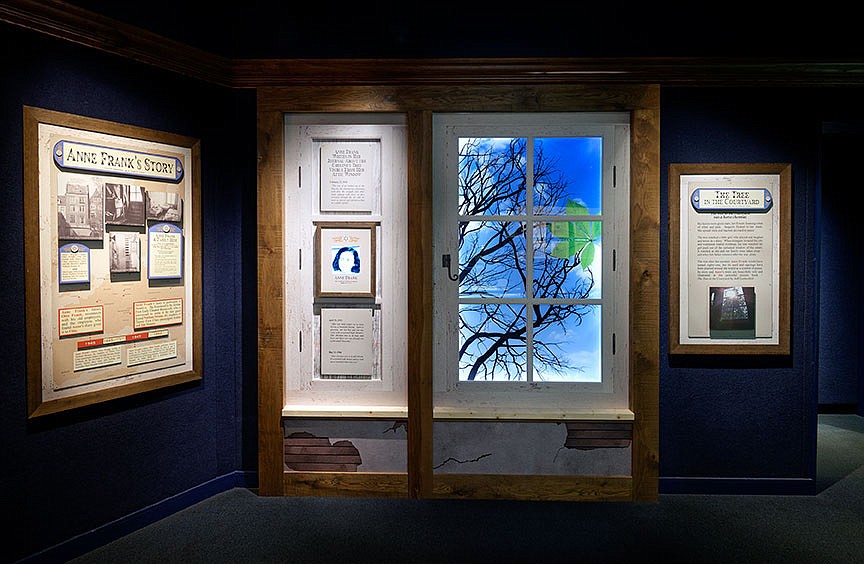 Anne Frank is connected to the Titanic through a friendship between her father, Otto Frank, and Nathan Straus Jr., the nephew of Isidor and Ida Straus. (Courtesy Photo)

FAQ Titanic Museum Attraction WHEN — Daily except Christmas Day through 2021 WHERE — 3235 76 Country Blvd. in Branson COST — $15-$28; family pass, $100; reservations are required INFO — titanicbranson.com FYI — Face masks are required for all visitors 5 and older. 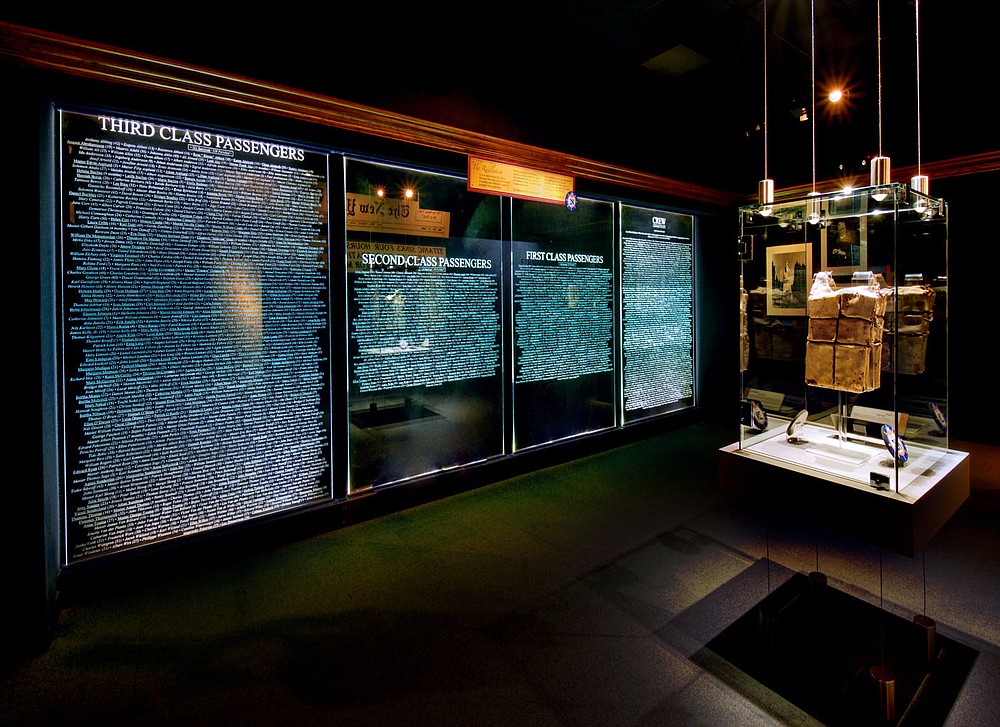 Museum visitors can pay their respects to the 2,228 passengers and crew of the Titanic. Only 705 survived the disaster in 1912. Each guest is assigned a boarding pass when he enters the museum and finds out at the conclusion of the tour whether that passenger survived. (Courtesy Photo)
More News

WHEN — Daily except Christmas Day through 2021

FYI — Face masks are required for all visitors 5 and older.