'It's going to do nothing but go up': Med school, jets, housing expected to increase Fort Smith population over decade 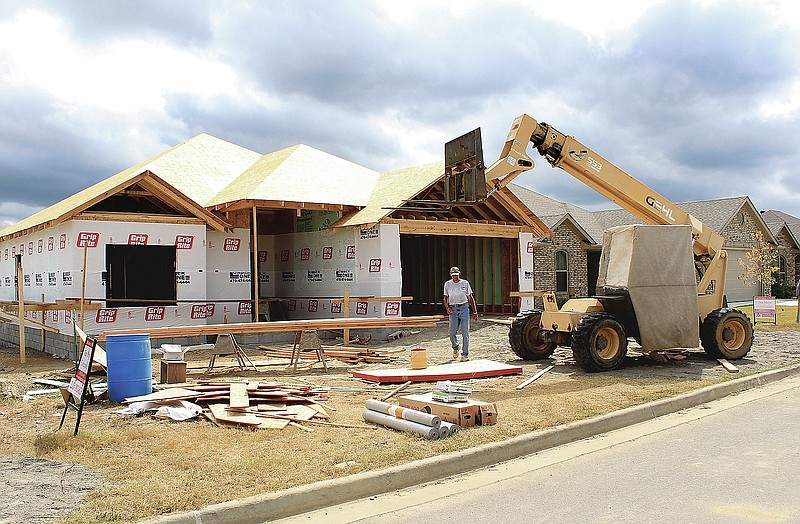 Moody Hamm of Tim Mays Homebuilders works Thursday on a construction in the 9100 block of Mayswood Place in the Chaffee Crossing area of Fort Smith. (NWA Democrat-Gazette/Max Bryan)

FORT SMITH -- The city is no longer second-largest in the Arkansas, but leaders believe it's primed to grow much faster over the next decade.

While Fort Smith's growth is modest compared to other cities, leaders and developers believe a more prominent, sudden population jump is possible due to initiatives such as Arkansas Colleges of Health Education's health and wellness research center and fighter jets set to relocate at Ebbing Air National Guard Base.

The census every 10 years determines how federal money is appropriated to communities throughout the United States. These dollars can go to schools, hospitals, roads and public works, according to the U.S. Census Bureau.

While the Fort Smith grew 3.4%, it fell to third behind Fayetteville, the southernmost large city in Northwest Arkansas and home to the University of Arkansas. Northwest Arkansas is home to Walmart, Tyson Foods and J.B. Hunt Transport -- three of the country's largest companies.

Fort Smith's county, Sebastian, didn't grow as much as other parts of the state, either. Sebastian County grew 1.6%, while Benton and Washington counties in Northwest Arkansas grew 28.5% and 21.1%. In central Arkansas, Saline County grew 15.2%, while Craighead County in the northeast part of the state grew 15.3%, data shows. Saline County is part of the greater Little Rock area, while Craighead County holds Jonesboro, home of Arkansas State University.

Mayor George McGill said he puts an asterisk next to the city's 2020 census because of how the social restrictions in place to prevent the spread of covid-19 might have affected the process. He believes Fort Smith's population should be closer to 95,000.

"At this point, what we're doing is just gather the information and do an honest assessment of what we should do moving forward," McGill said.

Despite the drop to third, some say the city's comparatively modest growth is cause for optimism. State Rep. Justin Boyd, R-Fort Smith, said the numbers show resilience from the 2012 closing of the city's Whirlpool plant. At its peak in 2005, the appliance plant employed 4,500. It eliminated more than 1,000 jobs with its closing.

In the past decade, the city has added thousands of homes in the Chaffee Crossing area. Engineered material manufacturer Glatfelter opened one of its production plants in that area. And The Unexpected arts festival has helped renew interest in downtown Fort Smith.

"They've arrested their decline, which is step one," said Mervin Jebaraj, director of the Center for Business and Economic Research at the University of Arkansas' Sam M. Walton College of Business.

Rod Coleman, chairman of ERC Holdings, noted the limited amount of land for development in the city could be partially responsible for the more modest growth. He said housing in Chaffee Crossing, the fastest-growing part of town, wasn't built until recent years.

Coleman also noted growth in nearby Greenwood, just south of Fort Smith. The town grew from 8,952 to 9,516 in the last decade, census data shows. All other towns of more than 1,000 people in Sebastian and Crawford counties -- where Fort Smith and Van Buren are -- also gained population, according to the census.

But within the city, leaders and developers point to Arkansas Colleges of Health Education as a current driving factor for growth and development. The school broke ground in 2015 and now has a college of osteopathic medicine and offers a master's degree in biomedicine and occupational and physical therapy programs. It's set to have a health and wellness research program following a $32.3 million grant.

Leaders also point to the selection of Ebbing Air National Guard Base in Fort Smith as the preferred location for up to 36 Lockheed Martin F-35 Lightning IIs and General Dynamics F-16 Fighting Falcon aircraft. The initiative is expected to bring more than 800 pilots, support workers and dependants to the area, according to military estimates.

McGill said "things are just now starting to fall in place" in Fort Smith that will drive population upward.

Parker estimates 3,900 rooftops have emerged in Chaffee Crossing since Colleges of Health Education was built. While Parker attributed this growth to his college, others say the school isn't the only contributing factor.

Coleman, who for 50 years has worked in housing in Fort Smith, said consistently low interest rates on homes have allowed the city to steadily grow over the last decade. He said interest rates are even better after covid-19 due to an excess of cash in the lending market.

Coleman also said Chaffee Crossing "in the last four or five years" has afforded housing developers unused land to build homes. He also said people have moved from outside Fort Smith to Chaffee for jobs at ArcBest and Mars Petcare.

"The last year has been great growth," Coleman said of Chaffee. "There has not been anybody who hasn't been able to build something and put it on the ground that did not sell immediately, almost."

But Coleman also said the medical college has been a driving factor in the growth. The college in 2021 graduated its first class of 150 doctors, Parker said. These numbers don't account for the colleges' other programs that push the total number of students to around 900.

"We intentionally underbuilt our student housing because we wanted the community to benefit from what we're creating," Parker said.

Most of the students come from the school's "service area" of Arkansas, Oklahoma, western Tennessee, southern Missouri and northern Louisiana. About a third are from other places in the United States, Parker said.

Of the graduated class of doctors, 10 of them are completing their residencies in Fort Smith, Parker said. He estimated 83% of doctors stay where they complete their residencies. And each doctor accounts for four additional medical employees, he said.

The college also has more than 180 employees. More than 80% of them moved from outside Fort Smith, Parker said.

The medical colleges is also going to expand into the old Golden Living center, where it will house its Research Institute Health and Wellness Center. The facility will facilitate biomedical research and more educational opportunities for students, according to Susan Devero, communications director for the colleges.

Once complete, the facility will be filled with about 100 employees with Ph.D.s plus additional staff, Parker said.

"There's not 100 Ph.D.s available in Fort Smith, Arkansas," Parker said. "We've got to bring them in from the outside."

Parker also said the employees themselves -- many of whom make more than $100,000 per year -- have an impact on the population because of their expendable income. He said the money spent on activities like dining creates more business, thus leading to more jobs in the area.

The initiative is estimated to bring 345 U.S. military personnel, 180 Singapore military members and 300 dependents to the River Valley, according to a Fort Smith Regional Chamber of Commerce news release. Officials expect the initiative to have up to a $1 billion economic impact on the region.

"The next three years is going to be very, very successful in the housing business out here just because of what we've heard and know about based on the jobs at the med school, based on the Singapore mission," Coleman said.

McGill, who helped convince the Air Force and Singapore delegation to select the city as the location, said be believes the people in charge of locating projects such as these trust the region will grow. He said the decisions to locate in Fort Smith is "simply preparing for that."

"What we're trying to do is make sure we're providing infrastructure for that kind of growth," he said.

While housing and economic wins give McGill hope for the future, he said these alone aren't enough to keep growing the city.

McGill said amenities -- things for residents to do outside of work -- are decisive in whether people move to another area or stay where they are. The same is true for businesses that wish to attract and retain qualified employees, said Propak CEO Steve Clark.

McGill said amenities in Northwest Arkansas -- just one hour north of Fort Smith -- were a draw for the Air Force and Singapore delegation to move planes to the city. The region touts amenities such as nightlife in Fayetteville, Crystal Bridges Museum of American Art in Bentonville and the Walmart Arkansas Music Pavilion in Rogers.

"If I'm taking my family to another town, whether we have this, this and this, whether it's a skate park or trail system or whatever it may be, it's going to weigh in to those decisions," Clark said.

Residents and visitors have shown renewed interest in downtown Fort Smith from The Unexpected arts festival, which Clark founded. Before covid-19, the festival annually brought a handful of nationally and internationally acclaimed muralists to the city for a week to paint their works on buildings throughout downtown.

In the last five years, downtown has had venues including a coffee shop, cigar lounge and skate park open to the public. The Bakery District, a multipurpose gathering space with a coffee shop, bookstore, food truck and patio area, has also opened. But the area also lost a brewery and music bar during covid-19 and a western wear store in spring 2021.

Clark gave a nod to Peacemaker Music Festival and Steel Horse Rally, which combined bring more than 100,000 people to the downtown area each year. He also said development on the city's riverfront will contribute to the attractiveness of the city -- the openings of the U.S. Marshals Museum and Community School of the Arts in that area are expected in 2022.

But Clark said the city still needs to accelerate its development of amenities. Some are on their way, such as the renovation of the park at West End in downtown and of the barracks in Chaffee Crossing.

"There's a lot of other municipalities that are trying to woo the same employers and employees that we currently have and want in our town," Clark said.

When asked what he expects Fort Smith's population to do in the next 10 years, Parker's answer was simple: "It's going to do nothing but go up."

One of the keys to this growth, Jebaraj said, is consistency in investments and improvements. Clark agrees -- he said the city won't continue to grow if its stakeholders don't continue to invest in good jobs and amenities.

Coleman predicts the city will witness the same growth in the next five years that it saw in the last decade.

Boyd said community leaders will continue to make the city "the right place for businesses to grow" and improve life in the city.

Fort Smith was originally built as a military fort in 1817 to keep peace between the Osage and Cherokee tribes that had entered the area.