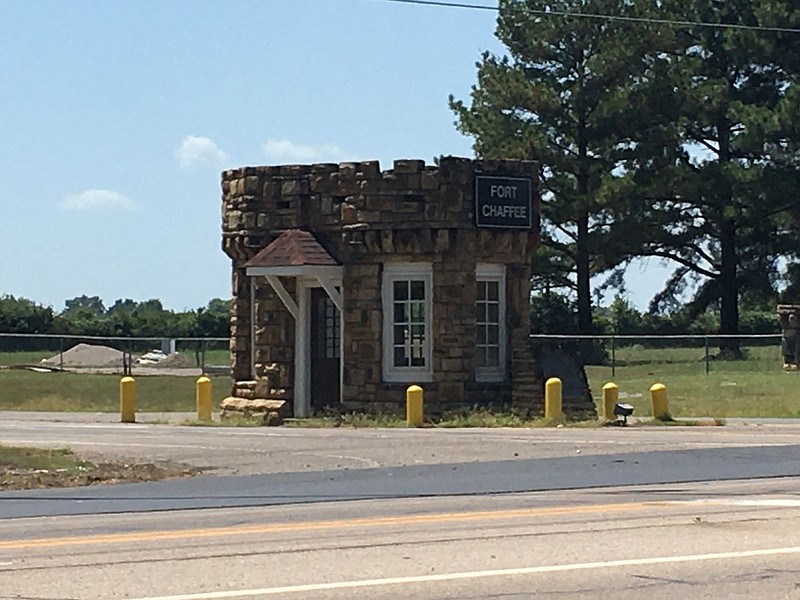 The entrance to Fort Chaffee as seen on Monday. (NWA Democrat-Gazette/Max Bryan)

Two members of the Army's 407th Army Field Support Brigade and a member of the Little Rock District of the Army Corps of Engineers evaluated the military base Friday through Sunday, according to Bob Oldham, public affairs specialist for the Arkansas National Guard.

It's the only place in Arkansas under evaluation for Afghan refugees to the knowledge of Gov. Asa Hutchinson's office, said Shealyn Sowers, director of communications and spokeswoman for the governor.

Oldham on Monday expected federal officials are speaking to the assessment team.

The assessment of the base follows the advance of the Taliban in Afghanistan following U.S. forces' announced Aug. 31 full withdrawal from the country, according to The Associated Press. The U.S. has spent nearly two decades in the country following the Sept. 11, 2001, attacks.

Tens of thousands of Afghans have sought to flee the country, The Associated Press reports.

The U.S. government Monday already approved Fort McCoy in Wisconsin and Fort Bliss in Texas to house visa principle applicants and their families. Fort Liam in Virginia had already been approved, Oldham said.

Alexia Sikora, communications director for 3rd District Rep. Steve Womack, R-Rogers, said other locations across the country are being assessed to house refugees as well.

"It's critical that anyone we accept is vetted, but we owe it to those who have helped our men and women in uniform," Hutchinson said Monday. "At this point, I have no information that Fort Chaffee will be used in the immediate future for housing refugees, but that decision will be made by federal authorities."

The U.S. Department of Defense didn't respond to a request for comment Monday afternoon.

Located in the Fort Smith area, Fort Chaffee is a training ground for the Arkansas Army National Guard and Air National Guard. It holds bed space for about 4,400 people, Oldham said.

The base in 1975 was selected one of four entry points for Southeast Asian refugees at the end of and following the Vietnam War, according to the Encyclopedia of Arkansas. These refugees were given medical screenings and paired with sponsors for residency in the U.S., Oldham said.

In 1980, the base accepted Cuban refugees from the Mariel Boatlift, the Encyclopedia of Arkansas states. It accepted refugees from Texas, Louisiana and Mississippi during the aftermath of Hurricane Katrina in 2005, Oldham said.

Oldham said he didn't know why federal authorities are evaluating Fort Chaffee "other than perhaps its history of housing refugees."

Part of the land originally used in the military base also has been developed for housing, private business and entertainment since 1997 through the Fort Chaffee Redevelopment Authority. Oldham said the remaining land couldn't house as many refugees as it could before 2008, when a fire destroyed 150 barracks-style buildings.

Oldham also said the National Guard doesn't have plans to dial back its training if Fort Chaffee is approved for refugees. If it's approved, he anticipates the guardsmen at the base for training would cut down on bed space for the refugees.

But Oldham also said the process for approval to house refugees at Fort Chaffee was "in the infancy stages" Monday.

The U.S. government began construction of Fort Chaffee — originally Camp Chaffee — in September 1941 in efforts to double its Army in anticipation of the upcoming conflict that eventually became World War II.