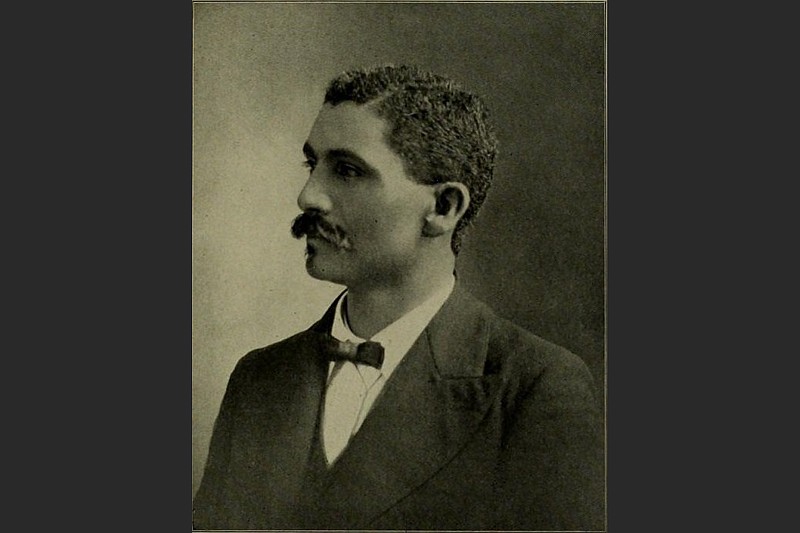 The Rev. Elias Camp Morris was pastor of the Centennial Baptist Church in Helena-West Helena from 1879 until his death in 1922 and the first president of the National Baptist Convention. Morris’ life and influence are explored in “Building for Tomorrow: E.C. Morris, Centennial Church and the Black Baptists During Jim Crow,” an exhibit that opens Saturday at the Delta Cultural Center in Helena-West Helena. (Special to the Democrat-Gazette/Delta Cultural Center)

A new interactive exhibit tells the story of a Black minister and former slave whose influence — from the pulpit to politics to business — stretched far beyond his home in Helena.

"Building for Tomorrow: E.C. Morris, Centennial Church and the Black Baptists During Jim Crow" opens Saturday at the Delta Cultural Center in Helena-West Helena and explores the life of Elias Camp Morris and the role of Black Baptists as they worked to uplift Black Arkansans in the late 19th and early 20th centuries, when Jim Crow laws relegated them to second-class status.

"It's a micro-historical exhibition that tells a larger story through the life and career of the illustrious Rev. Elias Camp Morris," says cultural center curator Drew Ulrich, who will provide a synopsis of the development of the exhibit during the grand opening at 2 p.m. Saturday.

Morris was born enslaved on May 7, 1855, in Murray County, Ga., to James and Cora Cornelia Morris. He would become the pastor at Centennial Baptist Church in Helena, a leader of the Arkansas Republican Party, a founder of a Little Rock college and the first president of the National Baptist Convention, the largest group of Black Christians in the U.S.

"He is one of the most understudied Black figures in Southern life during that time," says John M. Giggie, associate professor and director of the Summersell Center for the Study of the South at the University of Alabama, who assisted in the early stages of the exhibit. "His abilities to create a dense network of Black denominational culture for Baptists was really remarkable. No one of his generation did the same thing."

Todd E. Lewis of the Special Collections Division, Mullins Library, University of Arkansas Libraries, is the author of the entry about Morris at the online Encyclopedia of Arkansas.

The exhibit, he says, is "long overdue. He was the person who oversaw bringing together the largest African American denomination in the country. There's basically been nothing done on him, scholarship-wise."

It's apt that the cultural center, on the south end of Cherry Street in downtown Helena-West Helena, is home to the exhibit. Just a few blocks away, at the corner of York and Columbia streets, are the crumbling remains of Centennial Baptist, where Morris tended his flock for more than 40 years. The 1905 Gothic Revival structure, designed by Morris and congregant Henry Price, was placed on the National Register of Historic Places in 1987 and was listed as a National Historic Landmark on July 31, 2003. Years of neglect left it in precarious shape, and an April 2020 storm ripped away part of its roof.

THE MAKING OF A LEADER

Morris attended schools in Dalton, Ga., Chattanooga, Tenn., and Stevenson, Ala., according to Lewis. He also studied at Nashville Normal and Theological Institute in Nashville, Tenn.

In 1877 Morris set out for better opportunities in Kansas, but settled in Helena instead, devoting himself to the church, politics and helping Black people survive and succeed in a harshly segregated world.

"He was always traveling, always working. He had this incredible amount of energy."

Morris, who had five children with his wife, Fannie E. Austin, was named pastor of Centennial Baptist in Helena in 1879, a position he would hold until his death in 1922.

He organized Black Baptist associations in Phillips, Lee and Monroe counties and served as secretary for the Black Arkansas Baptist State Convention from 1880-'81. In 1882, he became the group's president, holding the office for 35 years. He helped start a Baptist seminary in Little Rock in 1884 — which became Arkansas Baptist College two years later — and founded the denominational newspaper the Arkansas Times, later renamed the Baptist Vanguard, according to Lewis.

The paper was "critical for creating a place of reference and communication for Black people across the Delta, not only in Arkansas but Mississippi as well," says Giggie, author of "After Redemption: Jim Crow and The Transformation of African American Religion in the Delta, 1875-1915." He explains that "it was a place to share ideas, to talk about political issues and share information about social life."

Morris was the Republican delegate for the Arkansas first Congressional District Elector at the Republican National Conventions in 1888, 1892, 1900 and 1904. In 1902, he was the catalyst behind the formation of the Helena Negro Business League and worked closely with Booker T. Washington, head of the National Negro Business League and the Tuskegee Institute in Alabama. Though he didn't receive the nomination, President William McKinley suggested Morris be considered for the post of recorder of deeds for the District of Columbia.

In 1908, he was special diplomatic envoy for President Theodore Roosevelt to the Belgian Congo and was part of the Executive Committee for Liberty Bond Drives during World War I. 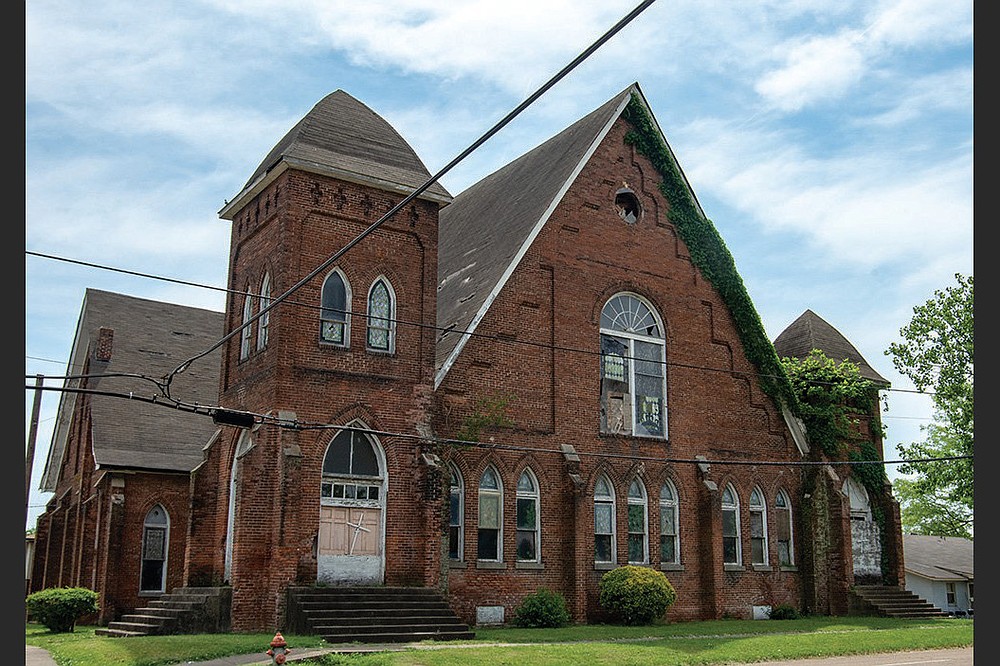 Centennial Baptist Church had just a handful of members when Morris took over, but swelled to around 1,000 in his time as pastor, says Ulrich.

"He very much realized how the church was a place that could mobilize African Americans in their community," Ulrich says. "He was kind of this new generation of African American leaders — mostly men — that emerged and propagated a conservative approach to racial uplift in the wake of the ascendancy of Jim Crow in Arkansas in the 1880s and 1890s."

Morris, like a lot of pastors at the time, felt a responsibility not just to his congregants' spiritual salvation but also their temporal salvation, Ulrich says. The church and its associations began developing organizations devoted to Black welfare.

"He proved to be this really dynamic leader that could unite churches to work toward goals that were designed to assist members to overcome the effects of the oppression that they experienced in their everyday lives," Ulrich says. "He was able to create networks and then galvanized and channeled them to give rise to businesses, schools and mutual aid societies."

In 1894, Morris was head of a national group of Black Baptists called the Foreign Missionary Convention. They merged with other Black Baptist groups to form the National Baptist Convention of the United States of America, which had about 2 million members and was, Ulrich says, "the largest independent organization of people of African descent in the world."

Morris became its first president in 1895, serving until his death in 1922 and making Helena the de facto headquarters of the group. The organization, now based in Nashville, Tenn., has more than 8 million members and is known as National Baptist Convention, USA Inc.

"He became, arguably, the most well-known Black Baptist intellectual in the country," Giggie says. "It gave him a very specific voice that he was able to use to build Black communities across the country, but particularly in the Delta. He leveraged his leadership to make the best of what was rapidly becoming a bad situation in Arkansas during the years of segregation and Jim Crow."

Ulrich explains further that, under Morris' leadership, "Black Baptist ministers mobilized their church communities to improve their standing in the country. Together, Black Baptists from the 1880s onward consolidated power in their churches and initiated organizations and activities to practically contend with the racial prejudice and segregation personified by Jim Crow and evoke racial pride."

And all of this long before groups like the NAACP, the Universal Negro Improvement Association and the Southern Christian Leadership Conference were founded. 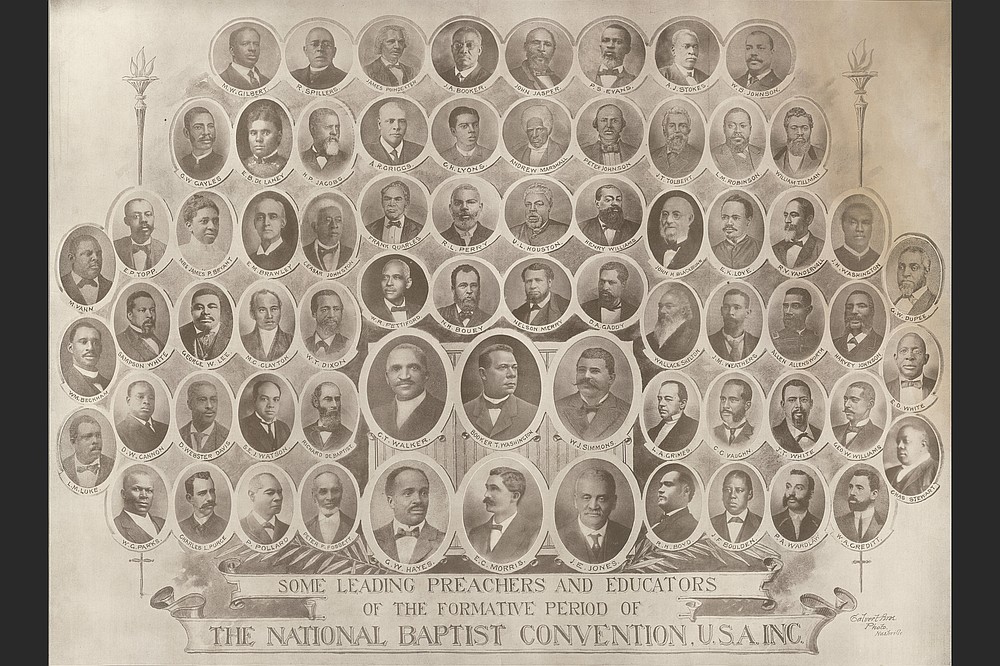 A collection of portrait photos of men and women influential to the National Baptist Convention and its forerunners includes Booker T. Washington (center, second row from bottom) and the Rev. E.C. Morris, (center, bottom). (Special to the Democrat-Gazette/Tennessee State Museum)

"They spoke at length about the best pathways for Blacks to advance in America, even as the freedoms that had been awarded them and protected for them after the Civil War were being eroded."

Though they acknowledged fundamental inequities in American life, Giggie says Morris and Washington "attempted to work through them by giving people skills and ambitions that could promise some degree of success or even just survival in Jim Crow America."

Morris was not like W.E.B. Du Bois, he adds, who spoke out against white supremacy. Whites in power were comfortable with Morris, who spoke at Arkansas' white state Baptist Convention in 1911. An attempt to have him serve as a delegate to the National Republican Convention in 1916, however, was blocked by an aggressively anti-Black group known as "Lily White" Republicans. Morris served on Gov. Charles Brough's Commission on Race Relations through 1921, but relations were deteriorating and lynchings were on the rise.

In October 1919, it is esti- mated that hundreds of Black people were killed by whites after a shooting at a meeting of the Progressive Farmers and Household Union erupted into a days-long spree of mob violence near Elaine, about 20 miles south of Helena, in what is known as the Elaine Massacre.

When asked by Brough about his view of the state's segregationist laws not long after the slaughter, Morris said: "The Jim Crow laws of the South are a disgrace upon the statute books of the states, for they benefit nobody and do hurt somebody," according to Lewis' entry at the Arkansas encyclopedia.

It was a rare show of candidness from Morris, says Ulrich, and following the brutality of the massacre, speaking out further may have led to more bloodshed.

Morris "was in a very difficult situation," Lewis concurs.

In 1920, at the Arkansas Republican Party Convention, Lily White Republicans tried to block the seating of Black delegates. Morris led a walkout of Black Republicans, who held their own convention and nominated Josiah H. Blount, the first Black person to run for governor of Arkansas. 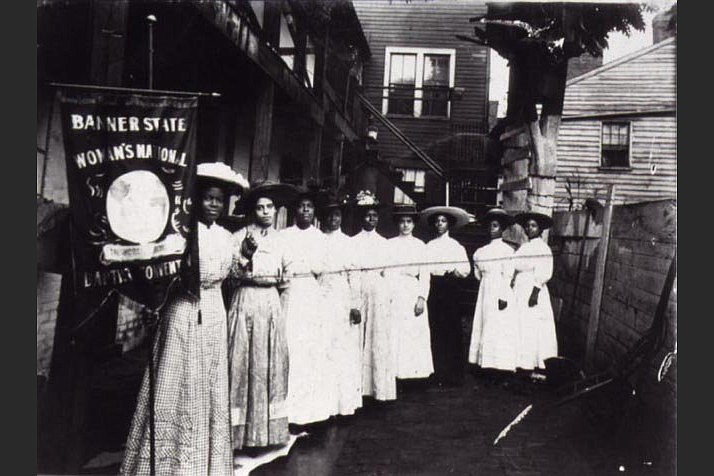 President Nannie Burroughs, flanked by female colleagues, holds a banner at the 1910 National Baptist Convention’s Women’s Convention. (Special to the Democrat-Gazette/Library of Congress)

HIS LEGACY LIVES ON

Morris died after a lengthy illness on Sept. 5, 1922, at the home of his son in Little Rock. He was buried at Dixon Cemetery in Helena.

"His legacy is leading Arkansas' Black people, Baptist and non-Baptists, in a way that helped them organize and mobilize and unite for both political and economic purposes," Giggie says. "His ability to sustain the National Baptist Convention as the most powerful Black religious body in the country was truly remarkable."

Ulrich says he hopes visitors to the exhibit will "grasp the figure of Morris and how he had such a great impact in the state, nationally and, to a smaller extent, internationally.

"I also want people to understand that we are telling a larger story besides Morris and Centennial. We're underscoring how Black Baptists here and across the South relied upon their church for spiritual and practical guidance on improving their station in life."