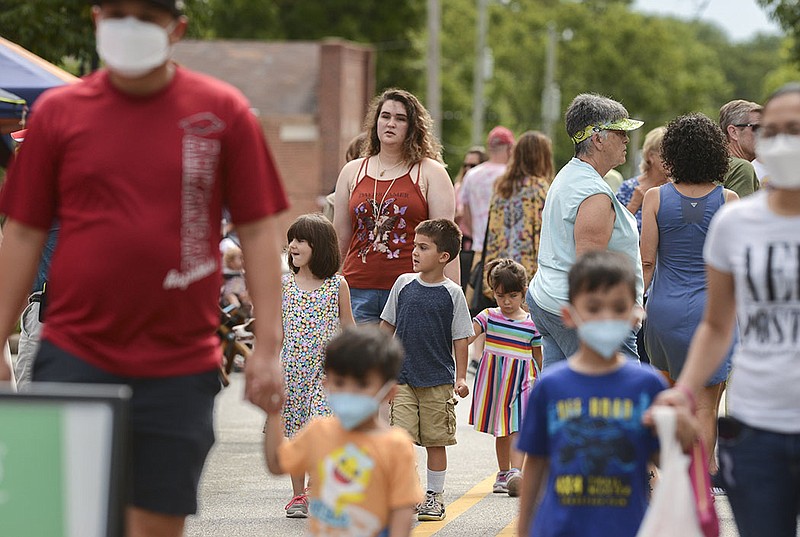 People walk around, Saturday, August 21, 2021 during the Farmer's Market at the downtown square in Bentonville. Northwest Arkansas grew in population in the latest U.S. Census. Check out nwaonline.com/210822Daily/ for today's photo gallery. (NWA Democrat-Gazette/Charlie Kaijo)

[CENSUS DATA: Map not showing up above? Click here » arkansasonline.com/2020censusdata/]

Benton County's countywide sales taxes, for instance, are divvied up by population between the unincorporated county and its incorporated cities. The percentages are set every 10 years, after each U.S. Census. Centerton's share will jump from 4.3% to 6.3%. Siloam Springs' share will fall from 6.8% to 6.1%, according to Northwest Arkansas Regional Planning Commission estimates based on census figures.

[TELL US WHAT YOU THINK ABOUT THE CENSUS RESULTS AT: nwaonline.com/822censuspoll/]

The population of unincorporated Benton and Washington counties is rising, yet the two county governments will see their percentages of county sales-tax revenue go down.

The full impact of the census numbers on tax distribution won't be known until the state treasurer's office certifies its calculations, said Jeff Hawkins, executive director of the regional planning commission.

Public officials already know, at least approximately, what the impact will be.

Washington County's revenue loss from sales-tax distribution and other population-related revenue sources such as state turnback funds will be "probably, I would imagine, about $750,000 to $1 million," County Judge Joseph Wood said.

The county is growing and taxable property values are rising, census figures and county records show. Unincorporated Washington County grew in population from 37,350 to 49,497, census records show. The county should be able to accommodate the loss in sales-tax revenue with the help of cities paying for county services such as the county jail, Wood said.

Justice of the Peace Ken Farmer expects the impact on operations to be minimal.

"County leaders anticipated the loss of revenue and prepared the budget for 2021 with that in mind," Farmer said.

A couple of events benefited the county, Farmer said. Sales-tax collection has been strong this year, and the census data was delayed, giving the county about six months of a higher-than-expected percentage of collection.

The delay in the census numbers reportedly provided the county with about $450,000 in additional revenue in 2021.

First-class cities have different rules compared with second-class cities and unincorporated towns, according to the Arkansas Municipal League. For example, expenses of more than $20,000 must be put out for bid unless waived by the City Council, and the city attorney must be elected to a four-year term.

Cave Springs' growth can be attributed to many factors, Mayor Randall Noblett said.

The city had several subdivisions approved with infrastructure installed at the time of the 2008 housing market crash. Most of the growth in subdivisions was built to order, so there were few unfinished or vacant homes.

"Since 2010, as the housing market recovered, we had a large volume of lots, with infrastructure in place, ready and available for building," he said.

Safewise.com, for the second-consecutive year, named Cave Springs the safest city in Arkansas for 2021. And Niche.com this year named it the best place in America to buy a house.

Cave Springs has 1,873 housing units, according to census data.

Other growth factors include the city property tax -- 2.75 mills -- being the lowest in the immediate area, Noblett said. Cave Springs is in a central location, near modern amenities and maintains a small-town feeling, he said.

"We have expanded the Police Department and implemented a maintenance and repair program for the streets," he added.

Springdale was 2,833 people behind Fayetteville in 2010, census figures show. The gap widened to 6,733 in 2020. The gap seems unlikely and widening that much seems implausible, Hawkins said, considering the development in Springdale over the past two decades.

"I think there was an undercount of the minorities in Springdale," he said. The undercounting of minority groups, which include the Spanish-speaking and Marshallese residents, is a historic problem in U.S. Census counts despite ongoing efforts to correct it, he said.

Springdale made a strong effort to reach the city's minorities, said Mireya Reith, director of the immigrants' rights group Arkansas United. Even a greatly improved outreach effort still could have left some section of that population uncounted, considering the history of the census across the United States, she said.

Bill Rogers, president of the Springdale Chamber of Commerce, agreed with Hawkins that it does not seem likely Fayetteville's growth -- while impressive -- outpaced Springdale's in the past 10 years. He estimates his city should have passed Fort Smith's total also.

"We don't know what effect the covid pandemic had on the accuracy of this count," Rogers said. "Remember that when the census count started, our minority population was the first and hardest-hit by the disease. They were just trying to stay alive."

The place Hawkins had worried most about being undercounted wound up growing by 20,000 residents -- Fayetteville.

U.S. Census Bureau leaders openly worried about what effect the coronavirus pandemic would have on the tally in university towns with students leaving campuses to learn remotely. The University of Arkansas, Fayetteville worked well with the city to count every single student who could be counted, Fayetteville Mayor Lioneld Jordan said Friday.

The student count was only part of the city's growth, though, said Jordan and Fayetteville Chamber of Commerce President Steve Clark.

People "aren't just moving here to get a job, then moving on," Clark said. "They like living here, and that's a result in Fayetteville of some of the amenities we've invested in: trails, parks, cultural attractions and other things. The investments paid off."

The business and cultural growth of the city spurred much of the population growth, leaders said. Crystal Bridges Museum of American Art, the Momentary and the Scott Family Amazeum all opened since the 2010 census. Work has started on the new Walmart home office campus.

"Bentonville has a strong focus on economics, safety, service and quality-of-life factors that tend to drive the desire to live, work and play in our city," Mayor Stephanie Orman said.

The 2020 census population numbers were within about 600 of the internal count from the city Planning Department, Orman said, so the count appears to be accurate.

Jake Newell, a developer in Bentonville, said the opening of Crystal Bridges in November 2011 was one catalyst to the city's growth over the past 10 years.

"It has been amazing to watch from then until now," he said. "It seems I am blown away about every 12 months."

People have moved to the city from states such as Colorado and Utah just because of the city's extensive biking trails, Newell said.

"I am not surprised at all because of the quality-of-life investments made by the Walton Family Foundation," Newell said of the growth. "What we have going on here is so special."

Bentonville issued 5,424 residential building permits that totaled 9,385 housing units with a total value of about $1.8 billion from 2010-20. There were 453 new commercial permits worth more than $1.1 billion in that same time span, according to Annette Brightwell, permit administrator in the Building and Fire Safety Department.

"Growing demands for public services and infrastructure costs will continue to be a challenge," Orman said. "We are working hard every day to plan for the growth in a responsible, transparent and accountable manner."

The Bentonville School District opened 11 schools, including its second high school, from 2010-20. District enrollment grew about 33% from 13,530 students to 17,970 during that time, said Leslee Wright, district communications director.

The U.S. Constitution mandates a census count of the population every 10 years. The first was in 1790. A census has taken place every 10 years since. The official count every decade serves as the basis for everything from the number of members of the U.S. House of Representatives each state gets to how much county sales tax each town gets.