In sickness, in health -- and in new locks 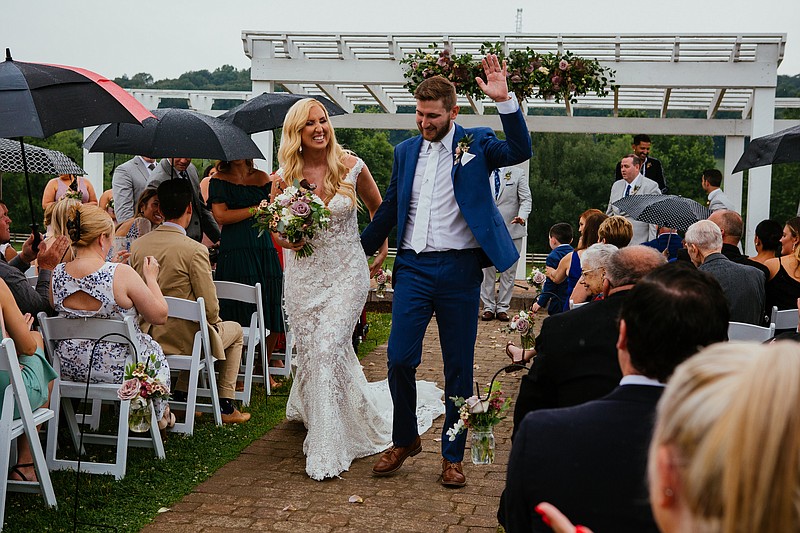 Brittany Muszynski remembers the old saying about all brides being beautiful. But when her own wedding was approaching, she started doubting it. "I thought, 'I'm going to feel so ugly when I get married,'" she said.

Muszynski expected to meet her fiance, Mickey Majzik, at the altar partially bald and with a stubbly scalp because of the six months of chemotherapy she started in August 2020 to treat her triple-negative breast cancer. She admires women who wear their baldness proudly, confident that their beauty is undiminished by the travails of chemo. But she is not one of them.

"It sounds terrible, and I feel silly admitting it, but I honestly cared more about my hair than having cancer half the time," she said.

Muszynski and Majzik, both 31, met in July 2013 on the dating app Tinder, though they say they probably would have met through mutual friends eventually. Both are native Philadelphians. She is from the Mayfair neighborhood; he is from Fishtown. "We recognized each other's pictures on the app," she said.

Both went to high schools in the city -- Muszynski to St. Hubert's and Majzik to Philadelphia Learning Academy-North -- and stayed in the area for college. She graduated with a nursing degree from La Salle University in 2012. He earned two degrees from Temple University: a bachelor's in business in 2013 and a master's in cybersecurity in 2016.

Within a week of their match on Tinder, they arranged a first date at Bottle Bar East, a Fishtown watering hole. On Muszynski's arrival, she found she knew the couple with whom Majzik had been having warm-up drinks.

"I was expecting it to be just him," she said. But he had met his friends Sean and Tayler Rahill at the bar hours earlier. Muszynski knew Rahill from St. Hubert's, where they were on the track team together. "It was a nice icebreaker having her there."

If she was making a great impression by enjoying the company of the Rahills, though, Majzik didn't let on. Instead, he temporarily forgot about her. "Mayfair didn't have as many cool bars as Fishtown, so I had ordered a Michelob Ultra," Muszynski said. Majzik found that choice unacceptable in a bar known for its craft beers and set off to find her a respectable alternative. He was gone a long time.

When he returned, he was empty-handed. "He was like, 'Oh, I completely forgot you were here,'" she said. He had an explanation for his behavior: "I was drunk, the way you sometimes are in your early 20s," he said.

But the next day, he pieced together that making conversation with Muszynski felt so easy that he might not have needed the pre-date lubrication. That afternoon, he texted her.

"I said, 'Hey, I'm going to go food shopping later,'" he said. "'I want to try and start eating healthy. Do you want to come with me?'" It wasn't Muszynski's background in health care he thought might interest her in a spin around the organic section at Wegmans. "It was just an excuse to see her," he said.

Muszynski liked the novelty of the suggestion. She also liked that he hadn't waited longer than 24 hours to ask her out again. "I never had a guy pursue me where he wanted to see me the next day," she said. "It made me feel like, wow, he must have had a good time. I wasn't expecting that."

At the store, he took the lead, unfolding what would become for Muszynski a culinary awakening. Thai and Indian ingredients were new to her. He was a Food Network devotee committed to educating himself about the flavors of the world. "His family is like my family -- they love their chicken fingers and french fries," she said. "We both grew up eating simple stuff."

Muszynski was reared by her mother, Marylouise, in the Northeast part of the city with two younger siblings, Daniel and Grace. Her parents divorced when she was 8; she has not seen or spoken to her father since.

As a school secretary, "my mom worked really hard her entire life to support us," Muszynski said. Majzik grew up with both parents, Barbara, who works as a receptionist at a podiatrist's office, and Bill Majzik, who is a supervisor for the facilities department at Temple University, and an older sister, Dana Hart.

They met each other's families before their relationship became official. The setting for both meetings was, unfortunately, funerals -- one for Majzik's grandfather, David Schindle, and, six weeks later, for Muszynski's grandfather, Robert Rybaskowki.

"A lot of things happened that summer," Majzik said. "We learned how to be there for each other." They agreed to be exclusive on Labor Day 2013, two months after meeting.

When Muszynski's cancer diagnosis came in 2020, their skills at being there for each other in tough times hadn't been tested in a while. Their first few years together, they said, were a breeze. They traveled to the Dominican Republic, Colorado and Mexico.

And they watched each other's careers take flight. In 2017, both had new jobs: Muszynski left Einstein Medical Center to become an oncology nurse at the Hospital of the University of Pennsylvania. Majzik, who worked as a counselor in Temple's financial aid department until 2016, became a business analyst at SEI Investments in Oak, Pa. They bought a house in Fishtown and hit pause on their travels to pay the mortgage.

In 2018, Muszynski was ready to get engaged. "I started making jokes about it, like, 'When is this going to happen?'" she said. Majzik joked back. "I said, 'Do you want a dog or do you want a ring?'"

She wanted both. They got Jenny, a goldendoodle. Before Jenny was housetrained, Majzik had started confidentially asking Muszynski's friends whether she had mentioned a favorite diamond shape or setting.

On June 19, 2019, he asked her to come with him to a concert at MilkBoy, a local club. She had never heard of the band, CBDB, and wasn't in the mood, so she asked if he could get a friend to go. He insisted, sweetening the deal with dinner. "He told me we'd stop for dollar oysters," she said, at Lloyd Whisky Bar.

She grudgingly accepted, then felt her mood plummet when she learned the oysters were sold out. "I was like, great. Then he starts dragging me to this concert I didn't want to go to."

Except it wasn't a concert. Majzik had rented MilkBoy for a proposal party. "I was walking up the steps, and I see this giant sign that says, 'Will you marry me?' Then I look up and all my friends and family were there."

In front of 60 guests, he dropped to one knee and presented her with an oval diamond ring. "It was my dream ring," she said. "I was so surprised, and so excited." She said yes. They set a wedding date of two years from that day.

Muszynski had already settled on arranging her long blonde hair into an updo for the wedding when she found out she had a particularly aggressive form of cancer. She and Majzik were also still learning, along with the rest of the world, how to navigate the covid-19 pandemic. They learned to navigate her health, too.

"The first time I saw Mickey cry was when I got my diagnosis," she said. "But he became my rock." Her colleagues in the oncology unit, knowledgeable about what she was up against, also supported her.

Last summer, just before her first chemotherapy treatment, a friend told her about Wigs & Wishes, a New Jersey foundation that gives free wigs to women with cancer. She made an appointment.

"I walked in very nervous," she said. Then she met Martino Cartier, the organization's founder and a professional hairdresser.

"I remember her coming in and telling me she was engaged to be married and had cancer," Cartier said. "At that moment, I knew I had to do something to change her life."

He sat her in a salon chair and told her that by day 14 of chemotherapy, her hair would start falling out. "I said, 'No pressure, it's entirely up to you, but when you're ready to shave your head, I'll be here for you.'" A week later, she came back. This time, she left hairless.

"He turned me away from the mirror, and in two minutes all my hair was gone and I felt a thousand times better," Muszynski said. Cartier had fitted her with a wig that restored her wedding day vision.

"It was dirty blonde, with highlights and a little roots at the top to make it look natural. It was like having an amazing blowout 24/7. It made me feel like myself, like I wasn't just a person who has cancer."

After she left Cartier's salon, they struck up a text friendship. "He started checking on me all the time and liking all my stuff on Instagram," she said. "He became my ray of sunshine in the rain." At a benefit for Wigs & Wishes that Majzik and Muszynski attended that fall, they asked him to officiate their wedding.

On June 19, Cartier, a Universal Life Church minister, married Majzik and Muszynski in front of 190 guests at the Barn at Stoneybrooke in Atglen, Pa. That afternoon, Cartier was Muszynski's ray of sunshine in a more literal rain: As her brother escorted her down a grassy aisle to join Majzik under an arbor adorned with roses, the sky opened and a warm drizzle fell.

Cartier didn't ignore it. "Think of this as a baptism," he said. "Without rain, there is no life."

Muszynski, in a lace mermaid wedding gown with buttons down the back, promised to love and honor Majzik. Majzik, who donned a royal blue suit, vowed to continue loving Muszynski, whose cancer is now in remission, in sickness and in health. "May God bless Brittany and Mickey," Cartier said after pronouncing them married.

As the couple recessed toward the bucolic barn in the distance, Muszynski's wavy blonde wig, set off by a sweeping tulle veil, bounced with the spring in her step.

Print Headline: In sickness, in health -- and in new locks