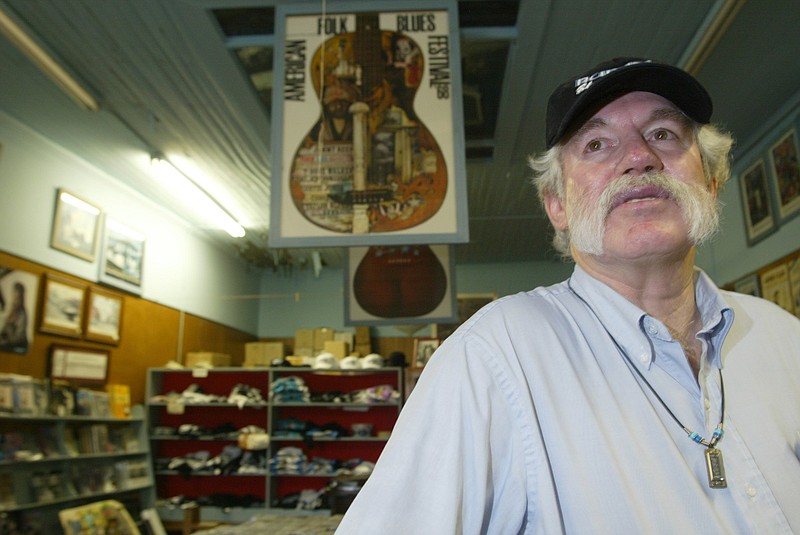 Berbon "Bubba" Sullivan, an avid champion of the blues and a driving force behind the annual King Biscuit Blues Festival in Helena-West Helena, died Wednesday at Baptist Health Medical Center in North Little Rock. He was 81.

Sullivan was a founding member of the Sonny Boy Blues Society, a group that helped organize the festival, which began in 1986 and was inspired by blues radio show "King Biscuit Time" on Helena station KFFA-AM 1360.

Though he didn't play an instrument, the energetic, mustachioed Sullivan was a constant presence on the festival stage as he introduced bands and amped up the crowd.

Bubba's Blues Corner, the record shop he opened on Cherry Street in 1987, was a destination for blues fans from around the world.

The occasional rock star, like Led Zeppelin frontman Robert Plant and Phillips County native Levon Helm of The Band, also were known to stop by. The store was in the same building as This Little Pig Antiques, a shop owned by Sullivan's wife, Kathy, who survives him.

"We call him the godfather of the blues," she said. "He was at our office every single day and he led the team."

"He was the king of the storytellers," said blues society board member Leslie Galloway. She knew Sullivan her whole life -- her father Ray Galloway and uncle Tommy Galloway had been pals with him since childhood. "He was a magnet for fun, good friends, stories, music. Just a beautiful soul."

"The guy was a ray of sunshine," she said. "It was obvious that he was moved by music, that he wanted to be surrounded by musicians, and many of his friends are musicians. I'm so grateful to him, and I'm sure I'm just one of thousands of musicians that can say that."

Jordan said Sullivan maintained "a wonderful relationship with the artists. He was a friend to everybody."

Leslie Galloway recalls that Sullivan's friends reveled in "Bubbaisms" -- sayings he would conjure while telling stories. Most aren't suitable for print, though she shared one.

"Tequila will make you give back things you never stole."

Sullivan celebrated his 81st birthday Aug. 5 at the Helena Tavern with family and friends, including Grammy-winning blues singer Bobby Rush.

Tommy Galloway, who lives in Houston, Texas, spoke regularly with him.

"He would call every Monday afternoon around 2. 'Hey, Cat. How you doin'?' He would be riding around listening to music and we would talk. He was loyal. If you were Bubba's friend, you didn't have to question anything he did for you."

Sullivan was born in 1940 in Helena to Berbon Silas Sullivan and Lucille Sullivan. He grew up in Wabash, about 20 miles south of Helena.

It was in Wabash that he first heard Sonny Boy Williamson and Robert Lockwood Jr., who performed on the "King Biscuit Time" show, he said in a November interview.

He graduated from Elaine High School and, except for a brief stint at what was then Arkansas State Teachers College in Conway, spent his life in Phillips County.

He served in the National Guard and worked for a candy distributor. He farmed with his father for a bit before he and Kathy opened their stores in Helena.

The blues festival, scheduled for Oct. 8-9, has its roots in shows Sullivan and his friends put on in the 1970s.

"It was the Highway 49B All Day Music Festival," Tommy Galloway said. "They all liked that song by War, 'All Day Music,' so that's what they named it."

Russell and Sullivan collaborated on a 2019 song, "Pink Pussycat Wine," with Sullivan contributing lyrics that captured his fondness for good times and music.

about some old friends of mine

back in the day off Highway 49