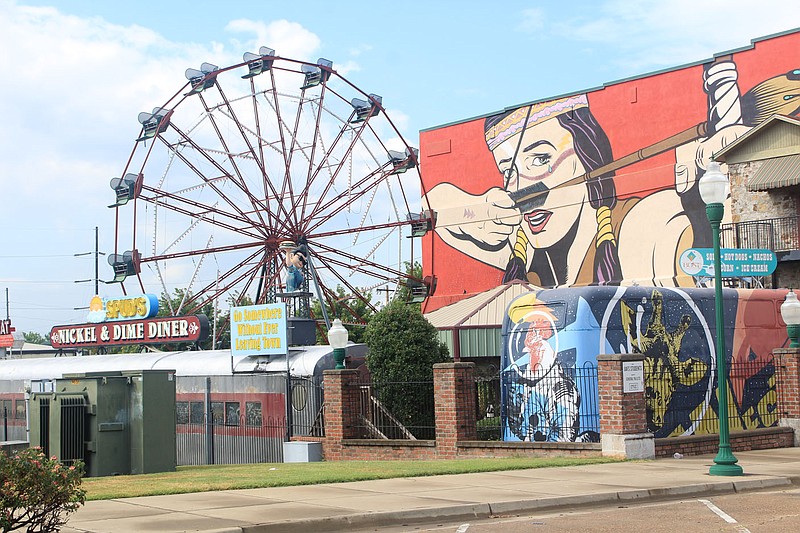 FORT SMITH -- Events, entertainment and beer are slated to complement amusement park features that have stood on the city riverfront for more than a decade.

Members of McMar Group at an Aug. 12 auction committed to pay $210,000 for The Park at West End in downtown Fort Smith. The park has been in operation since 2006 but experienced a decline due to unpredictable hours and covid-19, said owner Phil White.

The new owners plan to spend $100,000 to $150,000 to improve the park in a way that accommodates both nightlife and a family-friendly atmosphere during the day, said McMar Group member Colby Martin.

Martin and McMar member Chris McCoy hope to have the park open by spring 2022, they said.

"We don't want to open until we know what we want," Martin said.

The park overlooks the Arkansas River from the west end of Garrison Avenue. It features an Italian carousel, a rail car with a full-service restaurant inside and a Ferris wheel that can be seen as eastbound traffic from Oklahoma crosses the river into Fort Smith.

The city of Fort Smith in recent years rented out the rides in order to collect the revenue, White said. It sold about 11,000 tickets annually in recent years, he estimated.

"We did have a good rebound plan in place for the diner and the rides, but covid put the brakes on everything, and when I saw it wasn't going to work this year, I got frustrated," White said.

McCoy said he and his wife knew they wanted to purchase the park once they could afford it. He said the park came into their price range on Aug. 12, when it was auctioned off through Looper Auction and Realty. McCoy said McMar is set to spend around $231,000 with the additional 10% of the auctioned price given to White.

White said he's pleased with the sale and hopes the new owners breathe new life into the park.

Shari Cooper, Fort Smith's communication manager, said city staff were "more than excited" to hear the property was sold. She also said people at the downtown farmers market reacted well when the Ferris wheel was turned on Saturday.

"That says people are 100% ready for this downtown jewel with so much character and possibility to reopen," Cooper said in a statement Wednesday.

McCoy said McMar is contractually obligated to not sell the Ferris wheel or carousel for 10 years. He said he plans to have the carousel refurbished and the Ferris wheel inspected before opening them to the public.

"We want to operate this during the day, certain days, even having schools come during the day and having them ride the carousel, ride the Ferris wheel, take pictures, maybe feed the kids," McCoy said.

Martin said he and McCoy plan to also keep the restaurant inside the rail car operating seven days a week during normal restaurant hours. It will be accompanied by a beer garden in the outdoor seating area between the rail car and carousel, he said.

McCoy said he wants the restaurant to be known for a "signature dish" it serves. The restaurant will also include an area for photo opportunities.

"We want to say, 'Hey, when you come to Fort Smith, stop by the park on Garrison and take your picture, go inside and have the signature dish,'" he said.

McCoy said he has discussed adding a second level for seating in the park. He also wants to accommodate live music and group events.

Additionally, Martin said he plans to upgrade the park's look and feel by adding fixtures and paint.

McCoy said a state representative candidate has already reached out to him to hold a party. He said he will allow campaign events like this regardless of a candidate's political affiliation.

This inclusivity carries over to entertainment as well, he said.

Cooper said she and Convention & Visitors Bureau staff will make sure people know about the park once it's open.

Martin said he plans to advertise the park to ensure visitors will come. But he also hopes the cosmetic upgrades he makes to the park will market themselves.

"While this may be a business venture, it's quite clear that they are investing in the Fort Smith metro community," Cooper said in her statement.

Art in the park

The Park at West End is beneath the backdrop of a mural of a Native American woman by muralist DFace. DFace painted the mural in 2016 as part of The Unexpected arts festival.