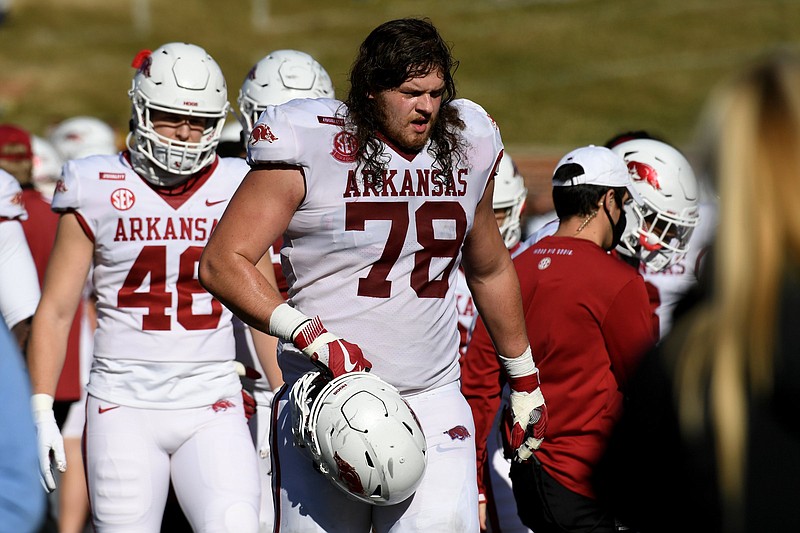 Arkansas senior tackle Dalton Wagner, shown during a game last season, agreed with Coach Sam Pittman’s assessment last season that he wanted the Razorbacks’ linemen to be not only stronger, but bigger as well. “It makes the game a lot easier being heavier,” Wagner said. See photos from Wednesday’s practice at arkansasonline.com/819practice. (AP/L.G. Patterson)

Seventh in a series previewing position groups for the University of Arkansas football team.

FAYETTEVILLE -- Two seasons ago, the University of Arkansas offensive line had been tailored to be nimble and agile, lighter than most, for the system installed by Coach Chad Morris and position coach Dustin Fry.

The unit averaged about 290 pounds per man heading into the 2019 season.

With the Razorbacks approaching the halfway point of training camp for 2021, the would-be starting five, many of them carryovers, average 318 pounds, led by 6-6, 325-pound left tackle Myron Cunningham.

Tackles Cunningham and Dalton Wagner, guard-center Ty Clary and center Ricky Stromberg all logged 10 or more starts for that 2019 unit and project as starters for for the Sept. 4 opener against Rice.

[Video not showing up above? Click here to watch » https://www.youtube.com/watch?v=tvYFYNLsdIA]

"It makes the game a lot easier being heavier," Wagner said. "It sucks, looking back when we wanted to be smaller so we could move better, when it's like we're probably moving better now when we're heavier.

Clary agreed when asked about making progress to become a "tougher" line.

Second-year Coach Sam Pittman came in last year saying he wanted heavier and stronger offensive and defensive linemen. The Razorbacks might not have caught up to the biggest units in the SEC, but they're a lot closer in the last 18-month span.

Pittman has said since December he wants to have more confidence running the ball on third and 1 than the offense had last season.

"I mean at that point, you've got to be better than the guy across from you," Wagner said. "Your will and your want has got to be better, and if Coach Pittman challenges us to do, that then that's what we'll need to make sure we get done."

[Video not showing up above? Click here to watch » https://www.youtube.com/watch?v=8nsZjLLvIDA]

The Razorbacks bring back all five starters for the first time in several years, but there's no guarantee the quintet of Clary, Cunningham, Stromberg, Wagner and sophomore Brady Latham will trot out for the first offensive snap of the season.

Latham and junior Luke Jones are locked into a camp battle at right guard, with both rotating onto the starting unit.

New position coach Cody Kennedy feels that spot won't be decided until close to the opener.

"They know what's at stake. It's not a secret in our room that there's a competition there. You know, great, great programs, great teams, that's the cornerstone of it is competition within those position groups."

Pittman's prior three-year stint with the Razorbacks saw great nationwide recruiting on the offensive line, leading to a cover shot for the 2015 media guide by the group of Denver Kirkland, Frank Ragnow, Dan Skipper, Mitch Smothers and Sebastian Tretola.

The current group of returnees, led by super seniors Clary and Cunningham, have 109 career starts between them, including a team-high 34 by Clary and 20 by Cunningham.

"Yeah a lot a lot of starts in that room, a lot of maturity, a lot of guys that have seen the ups and the trends of this program," Kennedy said. "They've heard from a lot of different coaches, so just speaking their language and working on that, building our calls and different things up front.

[Video not showing up above? Click here to watch » https://www.youtube.com/watch?v=rZTsjieJIxM]

"It's easier when you have those guys who have experienced change before. You've got a lot of starts in there with the Cunninghams, the Wagners, the Clarys, the Strombergs. These guys have been in a lot of games, a lot of snaps. And that experience just breeds confidence, and they're able to see those situations that arise almost before they do it."

The Arkansas offense will undergo a slight change in philosophy this season with KJ Jefferson starting at quarterback. A more dynamic runner than 2020 starter Feleipe Franks, the offense is expected to feature more run-pass option plays, the heart of the Kendal Briles offense.

Arkansas was right in the middle of the pack in the SEC, ranking eighth with 151.3 rushing yards per game last season, but its 3.84 yards per carry were 10th.

Lost yardage due to sacks figured into that statistic, and the Razorbacks hope to be markedly better in that department after allowing 34 sacks last year, tied for the worst in the SEC with Mississippi State, which had 273 more pass attempts than the Hogs.

Among recent signees who could contend for playing time this season are Ty'kieast Crawford, a 350-pound tackle transfer from North Carolina-Charlotte who was tasked with dropping weight after a lackluster spring. Marcus Henderson, Jalen St. John and Ray Curry Jr., all redshirt freshmen, are likely to start pushing for more action behind the veterans this season.

"They recruited some big boys, I'll say that," Wagner said.

Asked what level of improvement fans should expect from the offensive front, Clary said, "I think the offensive line has improved quite a bit. I think bringing back a lot of experience from last year, second year in the system, and then just a little bit more leadership out of some other guys in the room, we just jell together. I feel like the O-line is going to be excellent this year."

Said Wagner, "That's been the theme of this camp -- violence and execution. We need to perform on a consistent basis violently. Coach Kennedy has talked on that. He wants to make sure we get that done. The competitive depth that we have established right now is unmatched since I've been here."

The Hogs can match offensive line experience with practically any team in the FBS this season, but the performance must be upgraded if the veteran offensive unit is to take strides for first-year quarterback starter KJ Jefferson. The transition from respected veteran Brad Davis to Cody Kennedy as position coach has gone seamlessly according to the players. At heavier weights, the top players are expected to hold up better in pass protection and force more movement in the running game. Depth should be much improved. A knee injury by Stromberg in camp pushed Clary back to his old spot at center, giving Limmer more quality reps, which should have a benefit. The revamped defensive line was winning a lot of battles against the veteran offensive front early in camp, partially due to communication errors. If those issues can be sorted out, perhaps this is a year where the offensive line becomes a positive factor. 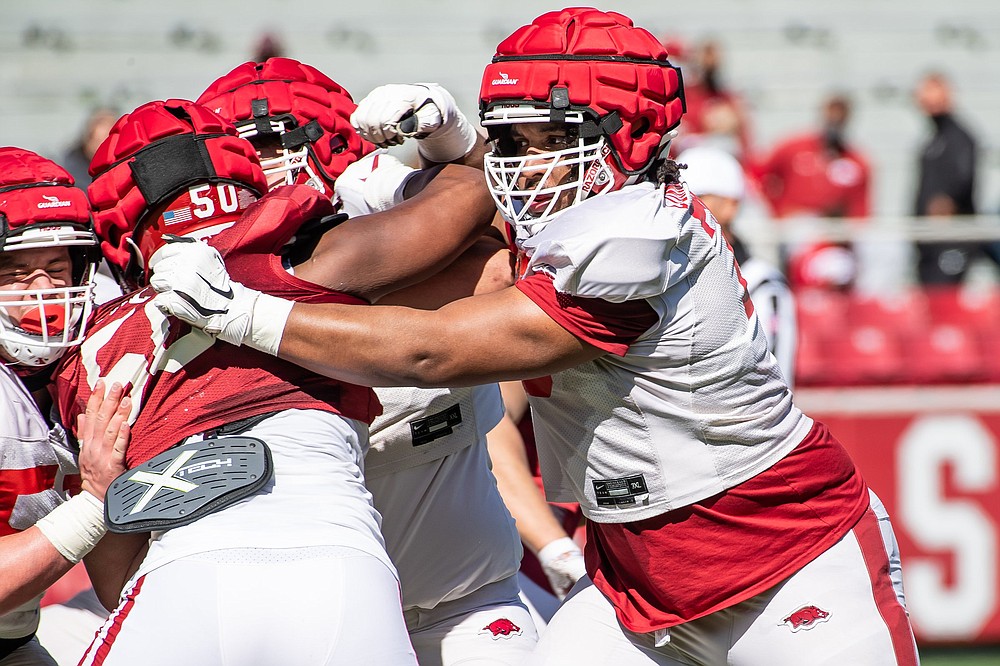 Arkansas tackle Myron Cunningham has 20 career starts with the Razorbacks entering his season and is the largest returning starter on the offensive line at 6-6, 325 pounds. (University of Arkansas/Walt Beazley) 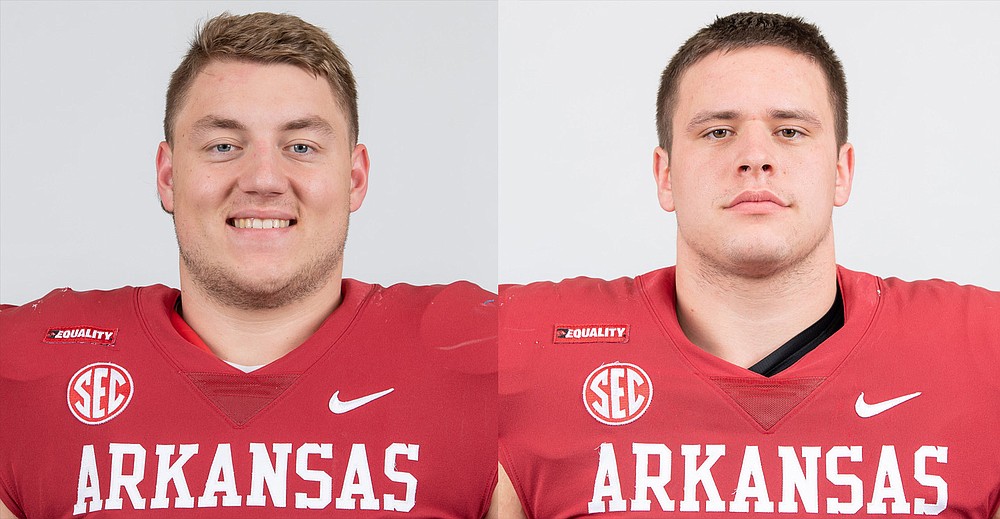 Shown from left to right are Ty Clary and Ricky Stromberg 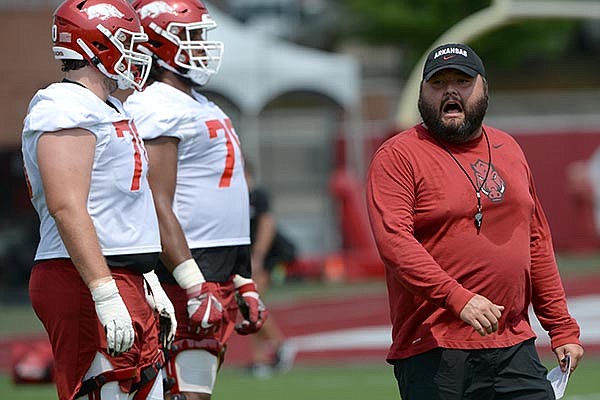