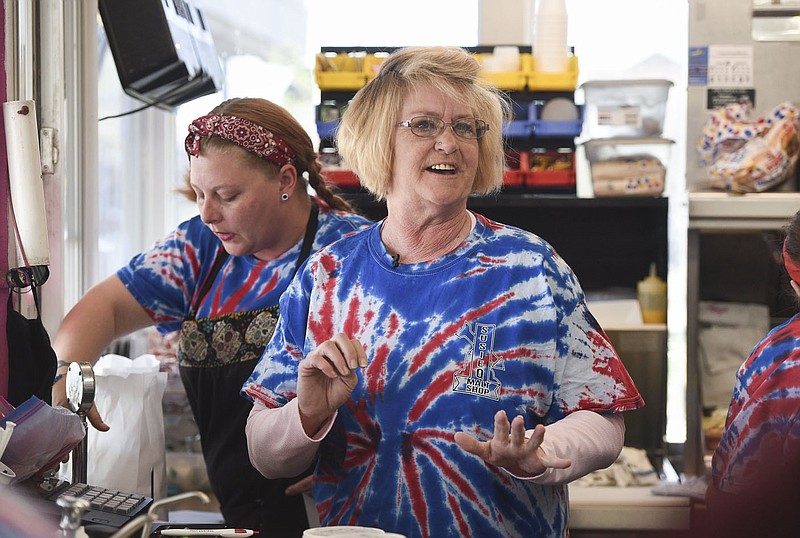 This time, Kat Robinson has gone back to happier days for "Arkansas Dairy Bars: Neat Eats and Cool Treats," an Arkansas PBS documentary that debuts tonight.

"We celebrate the new run of handcrafted sodas and beer and culinary wonders today," she says, "but dairy bars, that's where handcrafting never really left."

"Arkansas dairy bars are a particular part of our state's culture and are deeply rooted in our collective experience of childhood," says Courtney Pledger, Arkansas PBS chief executive officer and executive director. "Arkansas Dairy Bars: Neat Eats & Cool Treats,' with Kat Robinson as our travel and foodie host, shares the history and people of these one-of-a-kind establishments, evoking powerful memories for us all."

As was depicted in the TV sitcom "Happy Days," the restaurants Robinson calls "dairy bars" were "the hub of high school date nights, or where [townspeople would] land after a local football game. Being able to hang out while waiting for your order to come up at the window, spending time with folks outside chatting or throwing around a Frisbee or comparing cars -- it's a nice way to reminisce about earlier times."

"Well, burgers and ice cream have never gone out of style," says Robinson, an author, a television host, a publisher, a graphic designer, a former news producer, an experimental historian and, perhaps most important, an influencer on the culture of food in Arkansas. "You can go almost anywhere and get a burger that's exactly the same as one you'd get three states away, sure. But one that's hand patted, cooked by someone who's become an expert on the grill? Dipped ice cream cones?

"Breaking bread together is in many ways its own trigger to create memories."

Robinson grew up between Little Rock and Gurdon, where she says she "could easily see differences in how people ate early on." Eating with her grandparents meant the traditional version of "eating local," while with her mother, her experiences included dipped cones at Green's Drive In on north Geyer Springs, Black Angus burgers, Minute Man and Taco Kid and Mexico Chiquito.

"I recall a visit to the Leather Bottle -- my mom was out with friends and I was brought along," she says. "She ordered asparagus and got into the conversation -- and when she got around to eating, the asparagus was gone. I'd never, to my knowledge, had fresh asparagus like that before and I was hooked" -- so much so that her high school adventures revolved around trying new food. That pastime expanded when she enrolled in college at Arkansas Tech in Russellville and eventually became the main course of her livelihood.

Robinson was working for the Arkansas Department Of Parks And Tourism in 2012 -- after four years of freelancing and writing the "Eat Arkansas" blog for the Arkansas Times -- when she "opened an email from a gentleman who said he was expanding an imprint for History Press and was looking for someone to write about food in Arkansas."

"He had gone to Google and put in the words 'Arkansas food,' and my name came up in almost every site on the first page of results," she says, laughing. "I thought it was a joke, but he offered me a contract if I'd just come up with something I could turn around in 30 days. My last cover story for the Times was on places that served pie in Arkansas, so I said I could do that. I spent every evening in the month of August 2012 writing and editing photos, and every moment of those four weekends driving through Arkansas, stopping places and trying pie."

"Pie" turned out to be Robinson's pièce de résistance. Soon the book became the Arkansas PBS program, then the sequel, and it probably explains how she came to open her own publishing house, called Tonti Press. It's named after "Arkansas' original Traveler, Henri de Tonti," founder of Tontitown. "I felt like I was creating something that would allow me to evolve in the future. And I was right. I publish other authors now, and do layout jobs on the side. It's not what I thought I'd be doing at this point in my life, but it's satisfying and allows me to accomplish the things I need."

Robinson say she had been "going pell-mell at doing all the things for years" when the pandemic brought most of it to a screeching halt. Although she stayed busy with books like "A Bite of Arkansas: A Cookbook of Natural State Delights" and "43 Tables: An Internet Community Cooks During Quarantine," both completed in 2020, and an Arkansas PBS special titled "Home Cooking with Kat and Friends," filmed on cell phones in personal kitchens, Robinson had mostly stayed away from the restaurants she usually frequents as a precaution.

"On a trip out to deliver books, I dropped in at Mel's Dairy Bar in Malvern for a treat, and realized the dairy bar was the perfect restaurant model for the pandemic age, with limited contact between customers and restaurant staff," she remembers. "I did a bit of research, and found that of 95 locally owned and operated mom-and-pop dairy bars around the state, all but one had survived 2020.

"I started shooting the restaurants for a book on dairy bars at the very end of January [2021]. When Arkansas PBS approached me about beginning a new project in March, I mentioned this, and it soon evolved into a television special."

Robinson says she has "quite literally been to our state's four corners -- to Blytheville, Hiwasse, Texarkana, Dermott. For the book and the show, I traveled 8,903 miles." Along the way, she learned more than where to get the best chocolate shake.

"Our dairy bars tend to be located in the center of rural communities," she begins. "About half of those 94 locations are located on Main Street in these towns.

"Many of the restaurants derive their names from the local high school mascot, like the Lion's Den in Clarendon, the Yellow Jacket Drive In in Sheridan, or the Jackrabbit Dairy Bar in Lonoke. Others bear the names of their original owners, like Frank's Hickory House in Choctaw, Jim's Drive In in Green Forest and Barnett's Dairyette in Siloam Springs. They have throwback names that often have variations on the word "dairy" -- indicating what they serve.

"What I found was that within these restaurants, family reigns supreme," she goes on. "Many are family-only operations, where generations work side by side. In other places, the family is 'found' family -- people who have worked together for decades and who have become a family all their own. You see examples of both of these things at once, like at Feltner's Whatta-Burger in Russellville, where Bob Feltner's daughter and son-in-law are still operating the restaurant with employees who have become part of their work family.

"I've also found some love stories, couples who work side by side to create something wonderful, like at Bailey's Dairy Treat in Hot Springs, where Lien Morphew and his wife are the only employees, yet they manage to offer their burgers and fried rice over extended hours every single day."

And "the longevity of these dairy bars is extraordinary," Robinson marvels. "We have one, Betty's Old Fashion in El Dorado, that has been around more than 80 years and still draws a lunchtime crowd. And we have a few new operations, like the Delaware Ice Cream Shop and Deli close to Lake Dardanelle, where the dairy bar idea has sprouted up in the past couple of years and which draws on that sort of nostalgia."

The common thread, Robinson says, is a "stick-to-it attitude at every one of these shops, that's managed to keep them all afloat during these turbulent times."

"Every one of these places is staffed with people who understand how important dairy bars are to these communities. You see the way customers are valued. These places have regulars who return again and again, where someone can pull into the lot, and the staff knows what that order is going to be.

"You see a lot of friendly faces, lots of kids, lots of generational visits with kids and parents and grandparents. Dairy bars are happy places that help build cheerful memories -- that's why you find people who come back decades later, to reclaim that wonderful experience for themselves and for their descendants."

Robinson, of course, has already moved on to what's next.

"I've already begun production on a cookbook to be released this fall. Arkansas Cookery: Retro Recipes from The Natural State is a collection of mid-century creations found in our church and community cookbooks here in Arkansas, covering selections from the 1930s to the 1980s. These are the dishes that appeared across cookbooks from our state, or from across regions, moments in time not diffused by the internet.

"I was fortunate enough to spend a couple of weeks at the Writers' Colony at Dairy Hollow redacting, re-creating and photographing these recipes. There are recipes like Watergate Cake, tallerine, cherry Coke salad and molasses bread that you don't see in many cookbooks today, all with their own flavors that herald a different time. The cookbook will be out at the end of October." 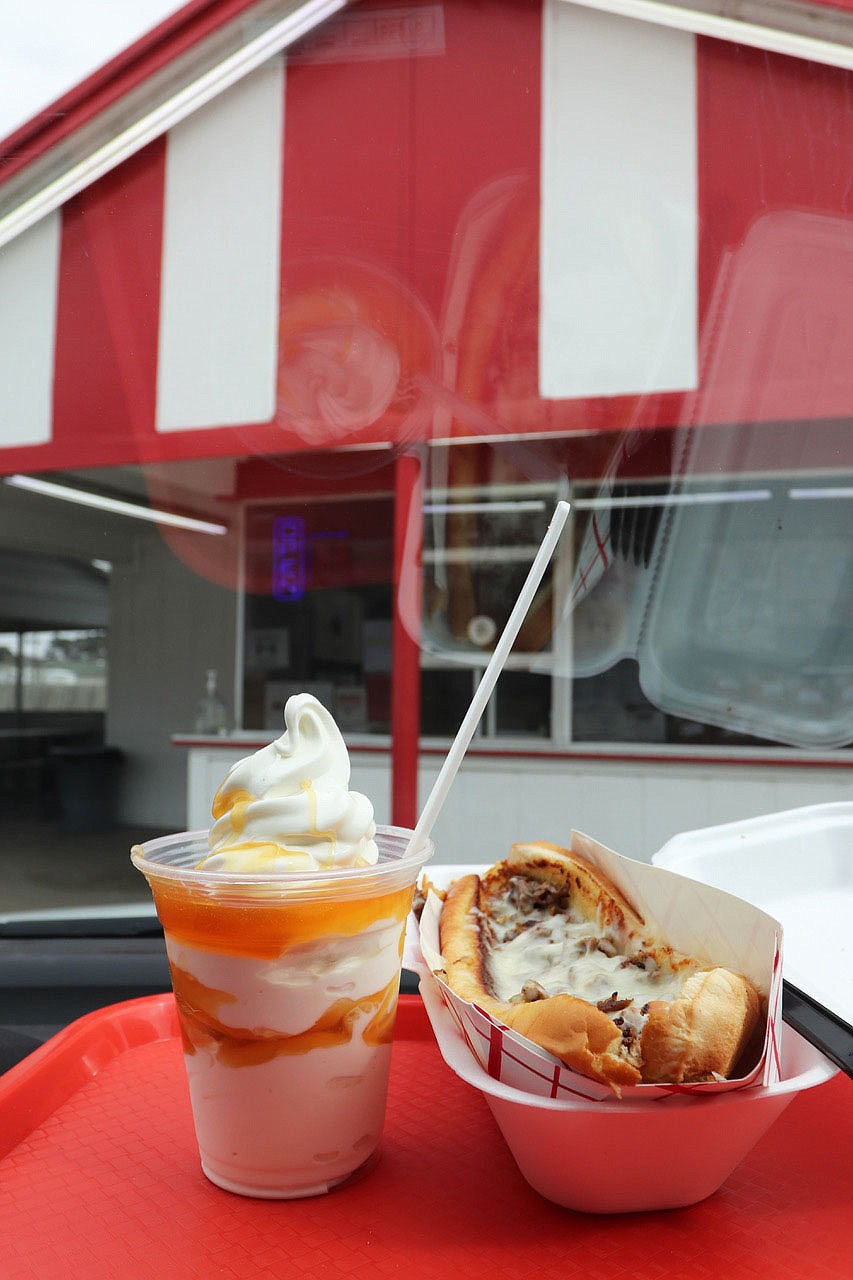 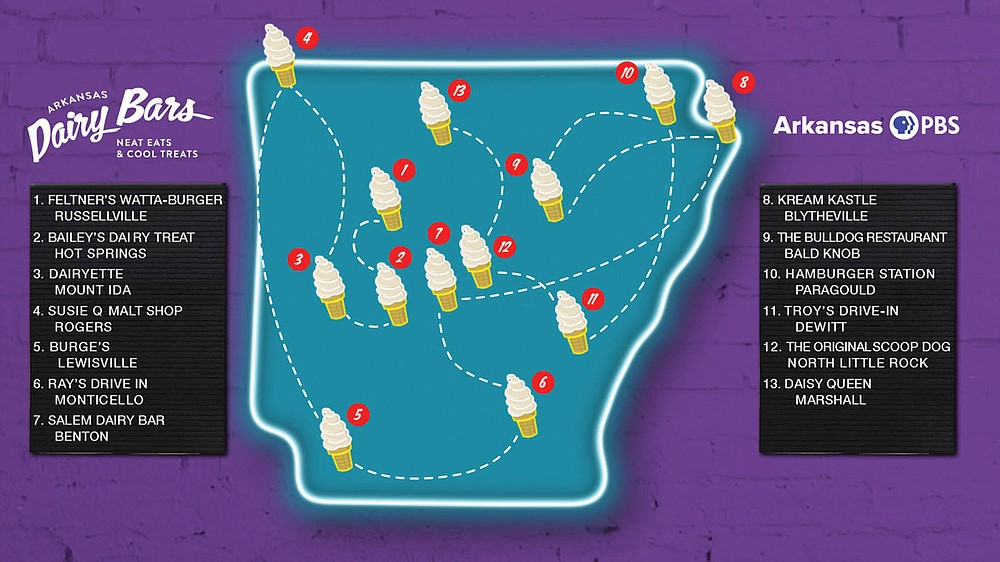 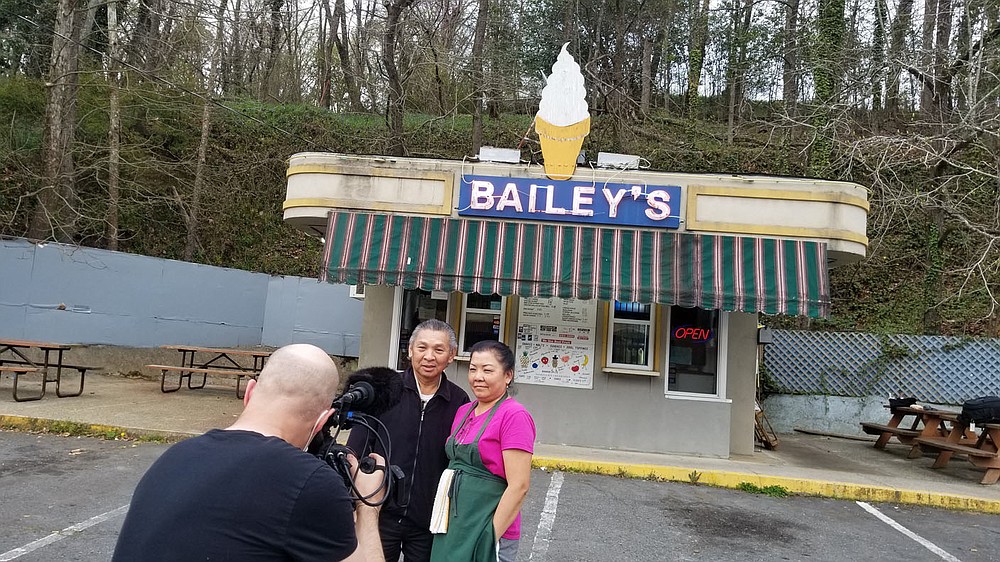 “I’ve also found some love stories, couples who work side by side to create something wonderful, like at Bailey’s Dairy Treat in Hot Springs, where Lien Morphew and his wife are the only employees, yet they manage to offer their burgers and fried rice over extended hours every single day,” says Robinson. (Courtesy photo/Kat Robinson) 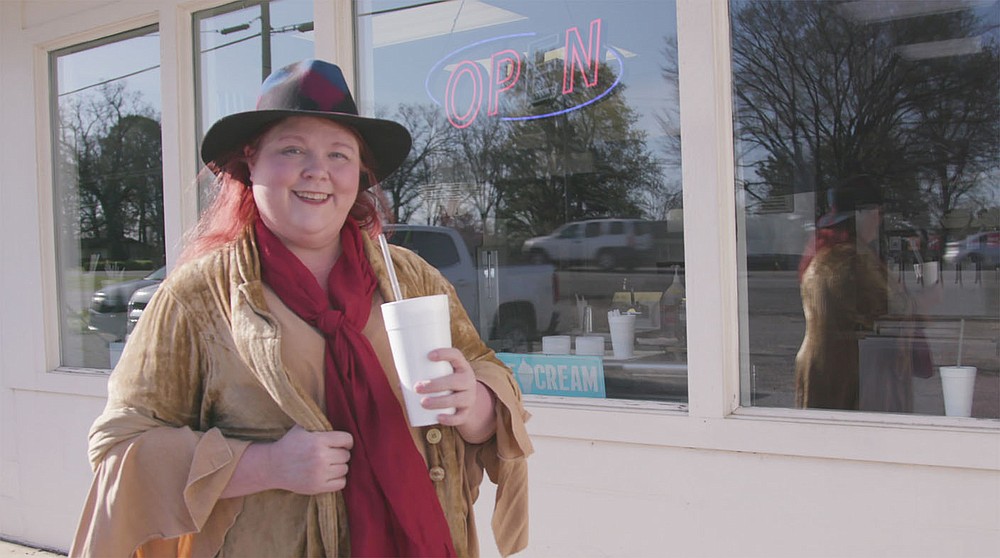 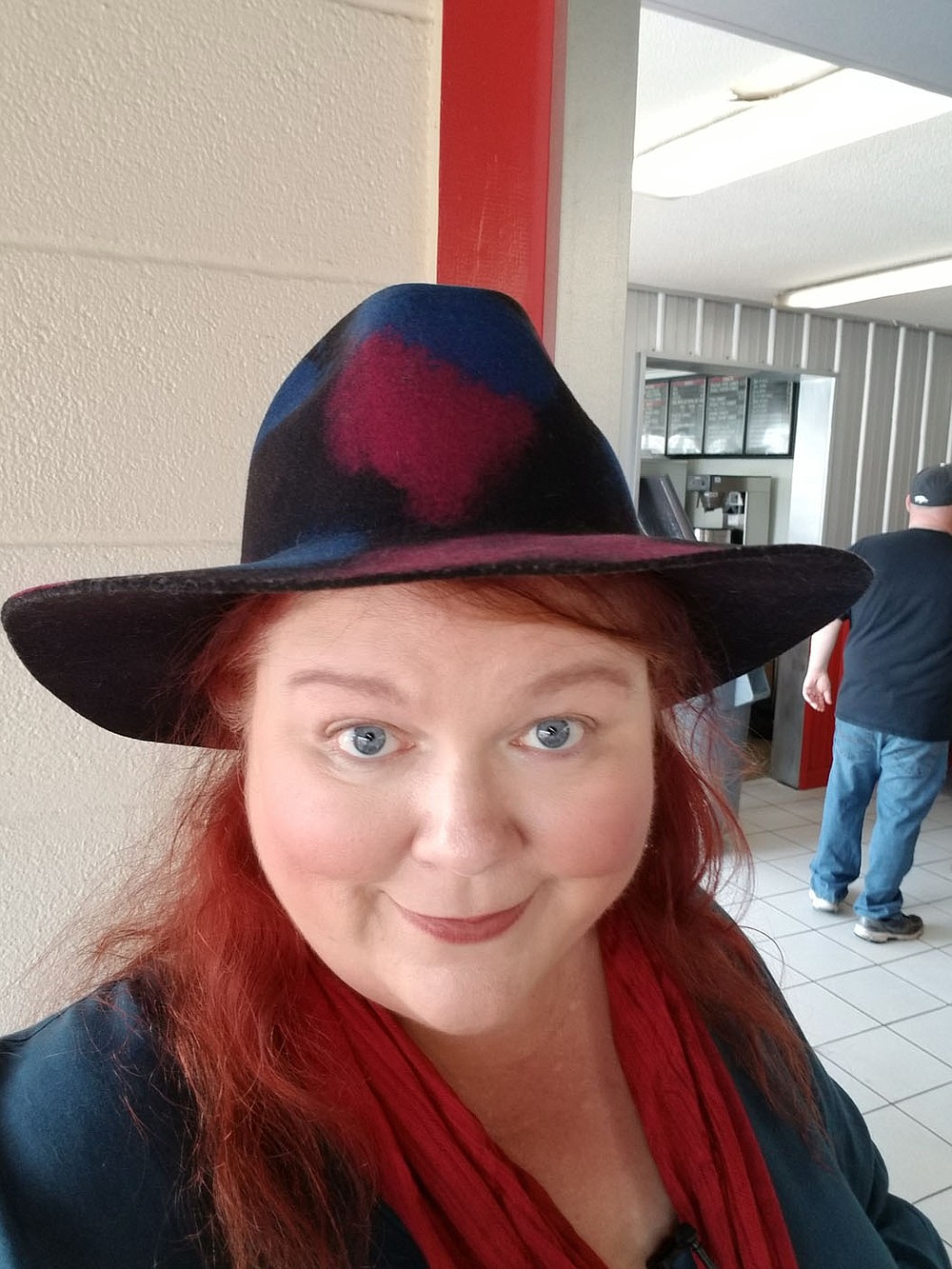 Kat Robinson is an author, a television host, a publisher, a graphic designer, a former news producer, an experimental historian and, perhaps most important, an influencer on the culture of food in Arkansas. (Courtesy photo/Kat Robinson) 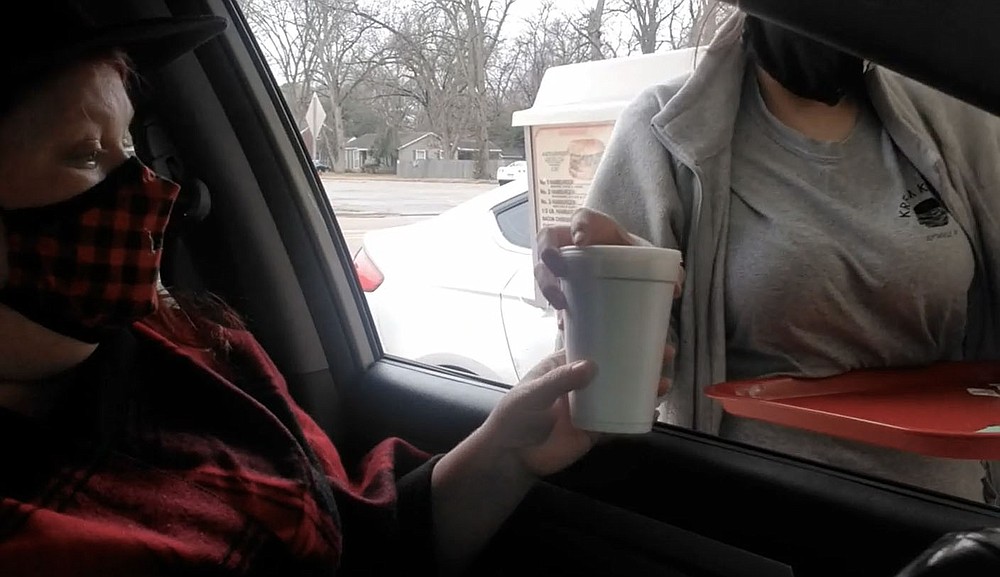 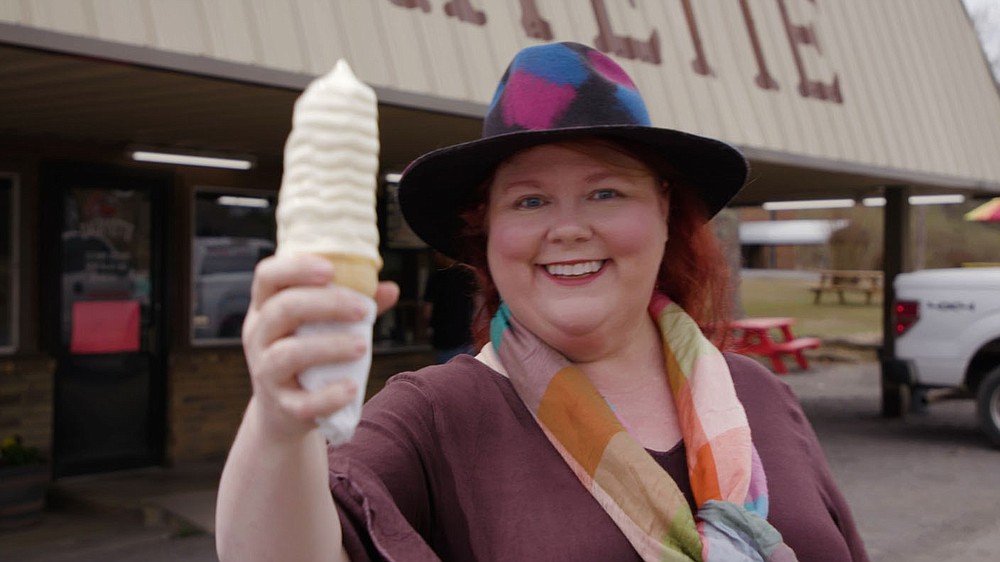 Arkansas food influencer Kat Robinson has been to all four corners of the state this year, exploring the classic hangouts she calls “dairy bars.” This cone was served up at Barnett’s Dairyette in Siloam Springs. (Courtesy photo/Kat Robinson) 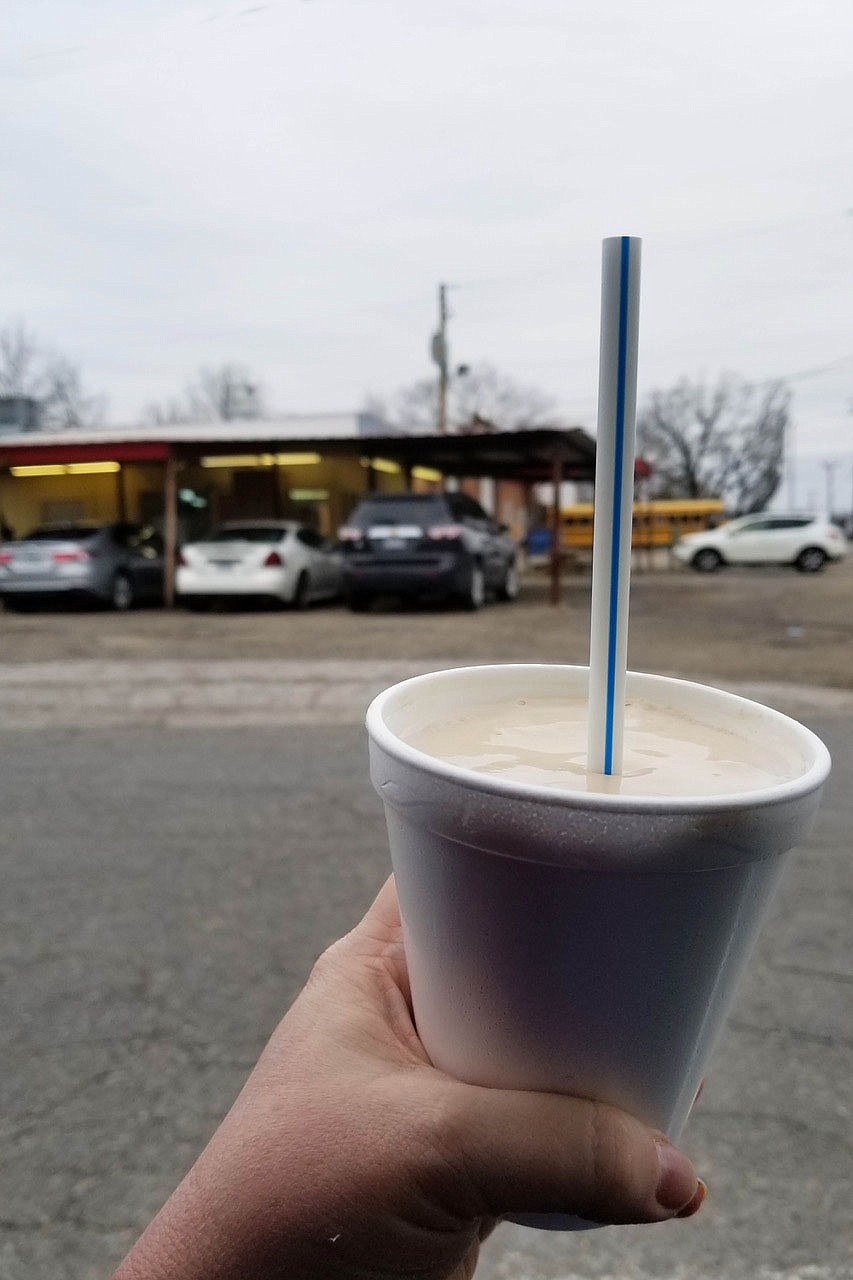 “On a trip out to deliver books, I dropped in at Mel’s Dairy Bar in Malvern for a treat, and realized the dairy bar was the perfect restaurant model for the pandemic age, with limited contact between customers and restaurant staff,” Robinson remembers. “I did a bit of research, and found that of 95 locally owned and operated mom-and-pop dairy bars around the state, all but one had survived 2020.” (Courtesy photo/Kat Robinson) 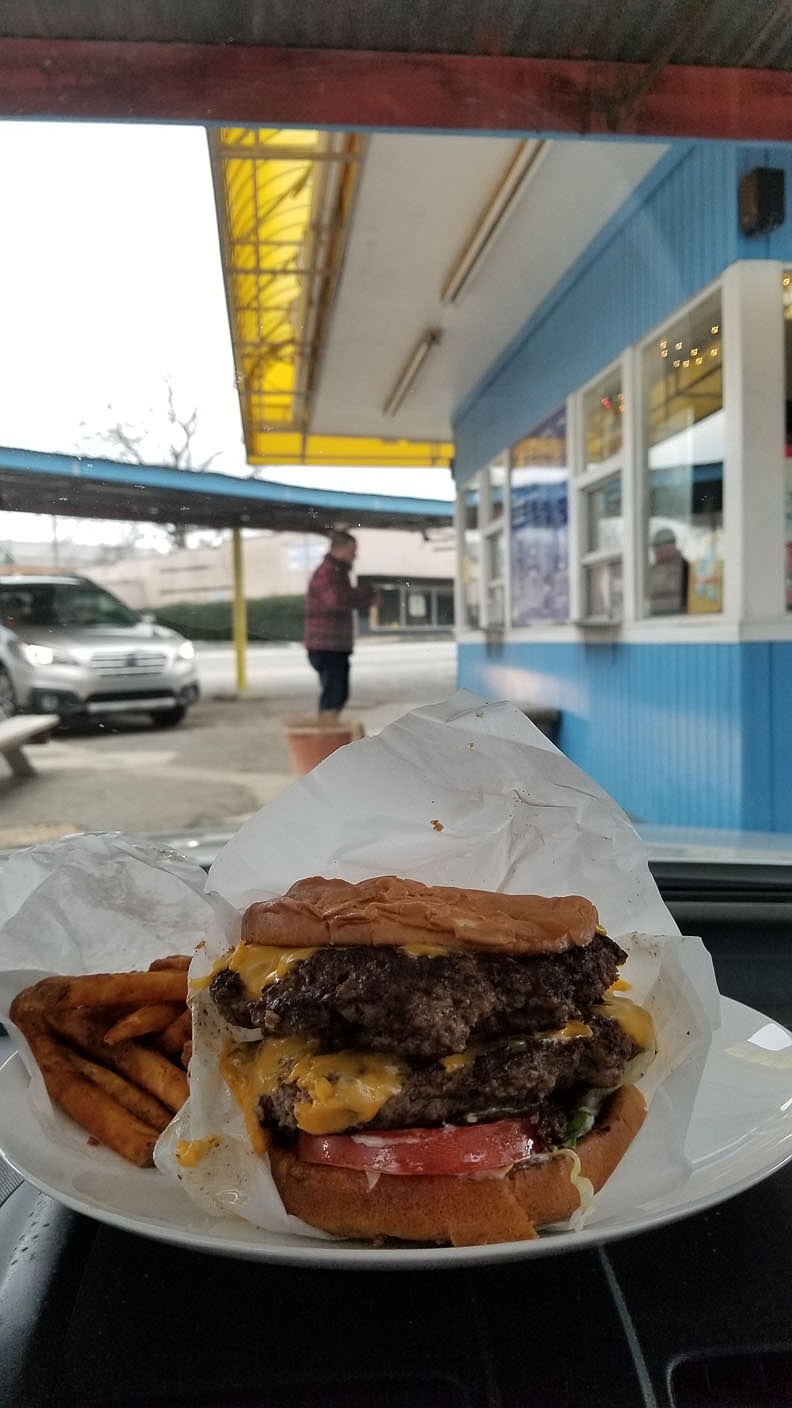 The Yellow Jacket Drive In in Sheridan, which gets its name from the high school mascot, serves up a huge double burger. (Courtesy photo/Kat Robinson)
More News

BONUS — Robinson’s book by the same title will be available to Arkansas PBS members first, then released nationwide Sept. 27.